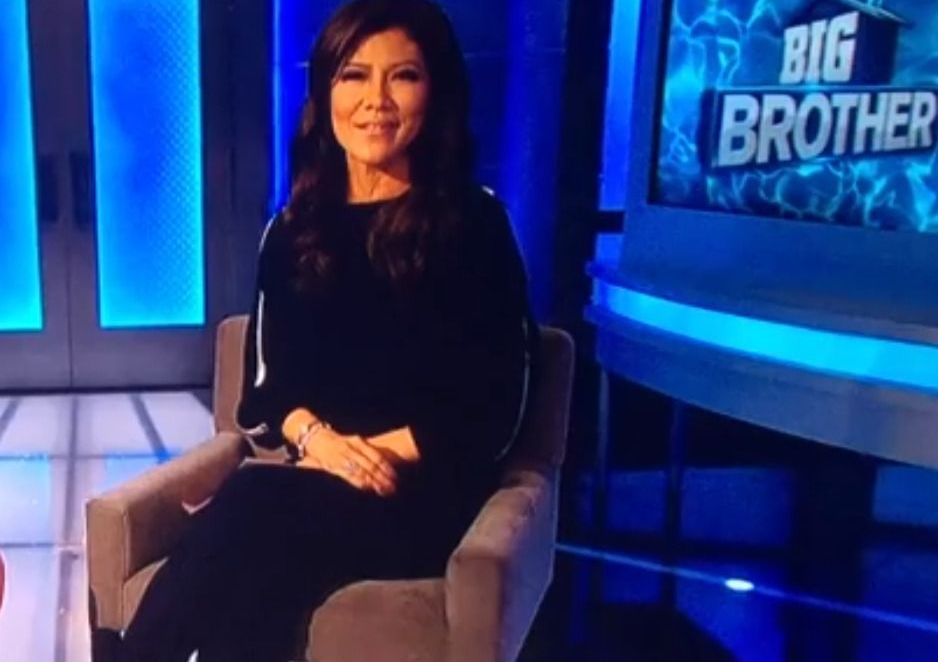 Four days after her husband, Les Moonves was officially ousted as CBS chairman, Julie Chen returned to television hosting Thursday night’s episode of Big Brother for what was to be a double eviction night on the reality-competition series.

Chen has not yet returned to her spot on the table as co-host of the afternoon series, The Talk on CBS.

Since more women came forward last Sunday in an article from Ronan Farrow in the New Yorker that accused Moonves of inappropriate workplace conduct and sexual harassment, followed by the CBS board learning that Moonves tries to buy an accuser’s silence by getting her hired at the network, thus Moonves is now reportedly not receiving his $120 million exit package, Chen stood by her husband when at the end of tonight’s episode of Big Brother she closed with this statement.

“From outside the Big Brother House with Brent, I’m Julie Chen Moonves. Good night.”
Until that statement, Chen has been radio silence since more accusations came to light about her husband.  Chen’s co-stars on The Talk have been talking about the hot button issue about their friend’s husband, and have held Moonves accountable for what the accusers have said against him and the workplace culture.

So, what did you think of Julie’s show of support for her husband, Les Moonves? Share your thoughts via the comment section below.

Y&R Casting New Role Looking For Female Mid 30’s to Early 40’s: Who Would You Suggest For The Part?

So sad; she’ll have to face the inevitable soon enough.

Questionable is all I can say…not sure what to make of Julie Chen’s choice. In all honesty I was a little distracted by the hotness sitting next to her. Lol.

If he is convicted of any of the accusations, she will probably have a change of heart, but for now, she is standing by her man. I dont have a problem with it. Many times in marriages, the first sign of trouble, the women usually leaves and bleeds her husband dry! Yes, it can be the other way to, but its still rare! Julie is smart, she will not look like a fool when all is said and done!

I interpret this as a message to her “The Talk” co-hosts who have come down hard on Les Moonves. That’s got to be tough on her and maybe she wanted to draw a line in the sand before she returns to “The Talk” – IF she returns.

I don’t want to see by again. She disgusts me’

Good for her! If she wants to stand by her man despite his problems, it’s her business.

I don’t think it was her best choice.

it was a very soap opera moment, she’s standing by her husband, he’s her family . this must be difficult beyond explanation. I can’t judge, no matter how you look at it its heartbreaking for her family and for the accusers its no picnic either. it is sad all around…period!

I see you, Julie.

The worst part of her statement was when she called the guy Brent instead of Brett!

True, she was so focused on ending with her husband’s last name

I definitely don’t want her back on TheTalk. She is weak, submissive and money hungry.

Same here, hopefully CBS drops her off both shows now.

Hopefully this means CBS will drop her from both shows. Chen bot.

This is difficult, he is a powerful man and if someone did want to ruin his reputation, get him out of his position of power, there is no better way in today’s climate to do it. So it comes down to, who do you believe the women or the man? In the Cosby’s case Julie was all for believing the women, but when it comes to her own husband, he is the victim–and these women are turning consenting sexual encounters into assault? Or perhaps she believes this was all before her time and she changed him– I don’t know, it… Read more »

Great that she’s supporting her husband, but doesn’t change what he did.

The Talk is nothing but a gossip show. Her husband is suddenly the object of the gossip. Now she knows what it feels like to be the subject. She can stand by him all she wants. She probably knew what he was doing all along.