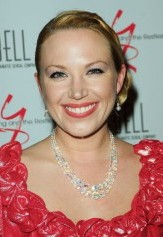 Is it really true that Adrienne Frantz is exiting The Young and the Restless, and taking her character, Amber, back to B&B?  Earlier this week, Adrienne confirmed so on her Facebook  page, but a B&B rep told TV Guide Magazine today, that she, ” jumped the gun.”  Apparently, there is no deal in place at the moment and B&B execs won’t even be getting serious about it until they return from hiatus next week.

The item from TV Guide also says that Adrienne has told some of her Y&R co-stars that ABC wanted her to replace Eden Riegel as All My Children’s Bianca. But a spokesman for ABC Daytime, insists no such offer was made to the actress. The bottom line is….Amber will last be seen in Genoa City on May 7, when she decides to flee town with her child and head to California (where B&B is set) in hopes of keeping the kid safe. A Y&R rep says Amber might be seen briefly after that in a couple of telephone scenes.

Frantz is still an egomaniac!

She claimed she left SuBe when they axed her since she was awful.

She complained that she should have won the Younger Actress Emmy because Amber had a baby and Grimes (who won as a child actress portraying Cassie) was a baby! Such class!

Announcing that she’s returning to B&B w/ no deal in place? LOL! She probably expects Brad Bell to grovel at her feet. He did after all send her flowers apologizing that she wasn’t part of B&B’s Portofino remote.

And she was part of Y&R clique w/c is why she got prenominated, while more deserving, more talented and more iconic performers like Braeden, Rowell and Thomas Scott get none.

B&B doesn’t need Amber! There are too many women! It needs to trim its cast, hire only actors who’d bring racial diversity and actors portraying lgbtq characters!

She is like Victoria Rowell, all mouth. But VR is a hater. I never seen anybody in my life that has so much self importance than Victoria Rowell!
She hasn’t worked daytime in 6 years but thinks she a star! a washed up star.

Jasmine, Victoria is not a hater, just someone willing to step up and speak for herself. Victoria is involved in many charitable organizations and tirelessly devotes her time to helping the cause of foster children in this country. She has worked not only in daytime but also night-time television and also motion pictures. Washed up? I don’t think so.9*

Rowell was on Diagnosis Murder and acted in Home of the Brave alongside Samuel L. Jackson. Her soap books were successful. She’s far from washed up.

I agree that she brings up a lot of valid points about Y&R. However, it’s the strong way that she delivers it that hurts her chances at returning. Then again Eric Braeden was very outspoken in how he was treated in the negotiations, yet he’s back.

I think Rowell is very admirable for speaking up and especially for holding together the Dru vs. Phyliss arc, when she very well could have told TPTB to nix it because of a repugnant, despicable on set incident. But she kept that arc going for the sake of the audience, so she deserves a lot of credit for that. And Y&R has its largest audience based on its black demographic. Fancast had a recent article on how Tyler Perry kinda built his empire a la Bill Bell, and how both went after the same demographic.

Therefore Rowell does have a point that Y&R should let its most popular black diva character and black actress return. Like it or not, Rowell is popular w/ the audience, and she has blazed a trail on Daytime. It’s sad that behind the scenes politics are hampering her return. There really is no Barber Winters storylines w/o Dru or Shemar Moore’s Malcolm. I read that Y&R reformatted and axed the Brooks Foster clans (except for Jill) when jaime lyn Bauer quit as Lorie Brooks bec she was too important to the show. Y&R should do the same w/ the Winters Barbers. They should introduce a new black family since they are boring w/o Dru.

And she does have a point on how the foster child storyline became incestuous. That’s obviously an advocacy of hers so why’d Y&R do that w/ Tyra. It appears like it was done to spite Rowell.

And Rowell did fight for more creative control and input in the show. She wanted to be on the writing team since I think Daytime has only had 1 black headwriter ever, and no other racial minority headwriter. How crazy is that? Rowell has the writing background and I think she’d contribute well to the show. And she can be objective since she didn’t nix Phyliss vs. Dru even after the incident.

Rowell’s labeled “angry black woman” or “crazy” bec she’s unspoken, but if a man was saying the same things, the reaction would be different. She’s probably very impassioned abt Y&R bec she’s so tied to it. But she was very calm and serene when interviewed abt her biracial daughter on Tyra and when she was interviewed in the news abt foster children and her autobiography.

I would have to agree with Charlie, VR is a great person, I would love to see her come back to Y&R, but only if it’s right for her! And far as Adrienne goes, her role is indulgent it dosnt matter! Let her go and be where she wants to be!

As a person who has grown up in the system is a foster child VR is doing something great with her life. I would love to see her come back I loved her on the show she gave it some spice and she was mind blowing when it came to putting Dru on our daytime screen I have much respect for this women who is doing many great things in her life something is in store for this women.

READ MORE
THE BOLD AND THE BEAUTIFUL: Brooke Faces The Wrath Of Everyone After Her Kiss With Bill Is Seen By All
Continue Reading
Advertisement