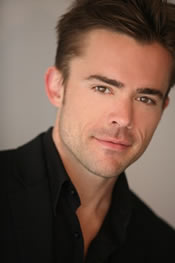 So many of us have missed John-Paul Lavoisier, who was extremely popular in the role of Rex Balsom on One Life to Live!  Now comes word that Lavoisier is the next soap all-star to garner a role in Crystal Chappell’s upcoming new web series, Beacon Hill!

John-Paul will play Eric Preston who is Claire’s son (Crystal Chappell) and Sara’s brother.  Eric’s easy smile hides a steely resolve and sharp ambition. His grandfather’s stroke may be just the excuse he’s been waiting for to make his move.

According to the series website, the premise of the story is: “When Senior Massachusetts Senator William Preston suffers a stroke, his rebellious granddaughter Sara is called home to Boston. Once there, Sara finds that her ailing grandfather has a new wife barely older than herself, that her mother Claire is still hiding in her room with her favorite bottle, and that her brother Eric is playing nursemaid in between board meetings.  Sara also discovers that her ex, State Representative Katherine Wesley, is being mentioned as a possible Senatorial candidate in a cat-and-mouse game controlled by Sara’s grandfather.  When former lovers Sara Preston and Katherine Wesley reconnect after six years apart, it seems unlikely that they’ll ever be able to put their past behind them. And with the political turmoil, family intrusions and the press interfering, it may be downright impossible.”

John-Paul joins the likes of already announced stars: Ricky Paull Goldin, Louise Sorel, Sarah Brown, and Melissa Archer!  Yes, Lavoisier will appear on the series with his One Life to Live on-screen sister!

So what do you think about the casting of John-Paul as Crystal’s son in the series? Excited to see him on screen again after missing him on One Life? Weigh-in!

THIS WEEK on DAYS: Kristen Is Pregnant! What Do You Think Of The Plot Twist?

Love it. Looking forward to this. Very intrigued by the super talent assembled. Can’t wait to find out who Sara is gonna be portrayed by……

WISH JPL WOULD COME ON OLTL —EVEN AS A GUEST FROM TIME TO TIME! BUT, AM HAPPY HE HAS THIS NEW SOAP!

I hope it is half as good as as the new ONE LIFE TO LIVE.

When did this series start? I love Sarah Brown… Is it on Hulu?

“Beacon Hill” will stream on its own website, beaconhill theseries.com
I don’t believe it has started yet.

With this cast and proposed story relationships, sounds like “Beacon Hill” will be successful and a hoot to follow! When will it begin to air?

.
Beacon Hill was considered to be an Americanized version of the British TV series, Upstairs Downstairs.
In 1975 it was a short lived soap on CBS ..
Beacon Hill debuted to monster ratings, the show dwindled and was cancelled after only 6 episodes, making it one of the most monumental flops in TV drama.
But most of the actors went on to bigger things anyway..

It sounds like a really good soap..
Being it will be on the internet I’m sure this time around I’m going to be fan !!!!

Great cast!!! Glad to see JPL in something!

Why not do OLTL if doing an online soap ?

Farrah Fath confirmed neither she nor John-Paul were asked back to the series.

Not true. Heard they wanted JP – but he said no.

Very good question. I’m also interested in the Tainted Dreams online soap as well, that has an interesting cast, with several former OLTL actors. Hope to see more of them return to the online version on Hulu.

I hope he and (Farah Fath) stay away from OLTL. Rex and Gigi practically ate the show the last few years and I for one don’t miss their epic, death-defying, time traveling tru wuv forever.

I think it’s awesome, especially since it’s being filmed somewhere that is so close to my heart.

I want to see him on One Life to Live!

Agree with Louisa! Excited to see him on the screen with Melissa Archer tho’. Loved them as brother & sister on OLTL.

just loving all the new options for entertainment! will watch this one for sure!

Internet programming is becoming very popular..
I watch a few internet series; House of Cards is my fav ..(and my 2 soaps.. lol

Looking forward to seeing John Paul again. the shows sounds like it will be good and I can’t wait to see it.Any sow that Melissa and john paul are in should be great.

he and fary were hilarious and the only likeable people on dirty soap.

Good for him! They’re getting together quite a good cast and the storyline sounds intriguing.

I don’t know – or really care – what sort of “range” JPL has an actor. What he definitely DOES have is a charm and likability that make watching him a treat.

And now that he’s not harnessed to that horrid Farah Fath, things can only be looking up for him.

was interested in watching this show, but now that I know Minshew is playing a gay character, not so much. Guess I won’t be watching. Don’t get me wrong, I don’t have a problem with gays, I have relatives that are gay, but I just don’t see Minshew playing that type of role. Would rather see her back on AMC with Thorsten Kaye and playing Kendall.

You don’t see Alicia Minshew playing “a reporter in New York [who] reluctantly returns home”? You don’t think she has that kind of range? She was one of my faves on AMC and I can definitely see her playing a reporter. But that’s just me. Do you hate reporters?

It’s a pleasure to see my son, John-Paul, even if only on an online show.