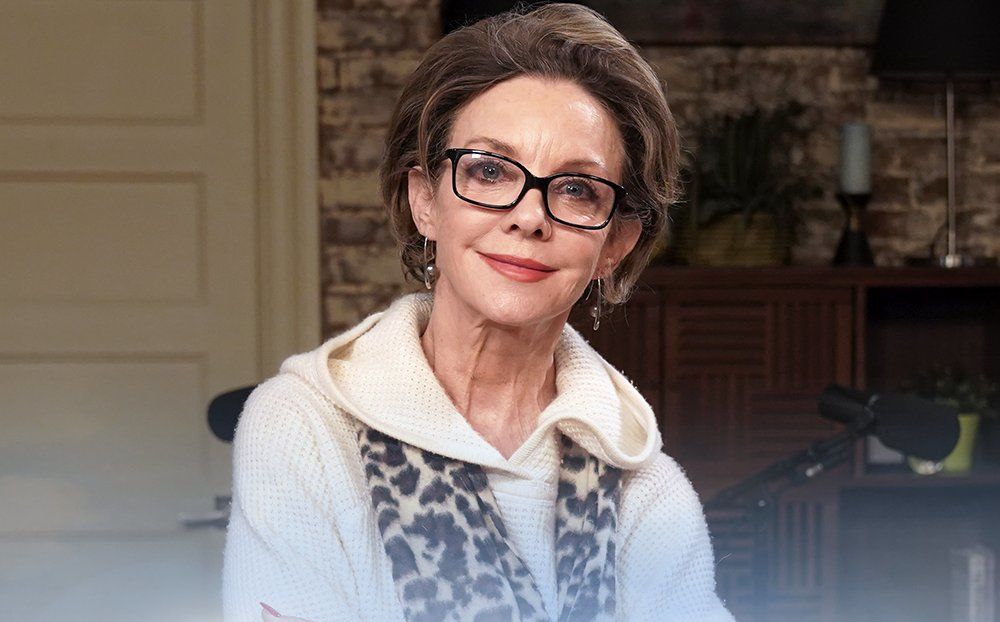 Oh, the mother from hell has certainly come to NBC’s Days of our Lives ,now that it has been revealed that Diana Cooper is in actuality none other than Diana Colville, who shared a romantic past with John Black (Drake Hogestyn), and is Leo aka Matthew’s (Greg Rikaart) worst nightmare!

During her interview with host Michael Fairman, Judith talks about how she was asked to take on the role, and found herself reunited with her former on-screen son from Y&R, Greg Rikaart.  She also teases what is to come in this twisted mother and son relationship, reveals what it has been like working with Deidre Hall and Drake Hogestyn, and talks about her former soap opera roles that included: Natalie Bannon on As the World Turns, Ginny Blake, General Hospital, Charlotte Greer on Ryan’s Hope, Angelica Deveraux on Days and Gloria Fisher Bardwell on Y&R- quite the resume.   When not on TV, Judith can be found in the theatre, where she is currently starring as Tallulah Bankhead in the show, Looped now through February 10th in Palm Springs, California.

Later in the podcast, John Aniston (Victor) stops by Suzanne Rogers  (Maggie) dressing room, where the duo talk about how they work together running scenes, and going through a tape day, and some fun historical anecdotes from Salem, and more.

To get the extended version of this interview with Judith, make sure to download it via iTunes and all major pod platforms.  To listen to the NBC.com version make sure to click here and enjoy.

Let us know what was your favorite part of our chat with Judith and if you are loving her thus far as Diana on DAYS via the comment section below.

Y&R’s Eric Braeden Shares His Heartbreak Over The Death Of Kristoff St. John

OH My God… with respect to the higher up

Judith Chapman : for the ages

^^^ “what a resume ” you want to partay .. wine bubbly splash something ON

can’t wait for this weekend ( to listen )

one of – OUR – Grand Dame un momento

OH, yeah, Patrick—a gem has walked onto Salem’s soil….Miss Judith is the femme fatale, shrew, calamity personified–can’t tear myself away…. I didn’t know you spoke Italian, Patrick?!?!?!LOL…. un momento….. Aside: Why can’t Abbi put two and two together and figure out Jordan took the baby? Ben will find Charlotte and Ciera– But, will Ciera be lucid enough to defend Ben, once he is accused of the crime? Furthermore, Patrick….What in Hades are the PTB doing? Why make Jordan nuts? Is it to prove a family trait? Jordan was always the good guy, who cared for her little brother. Everything was… Read more »

Celia…youre breakin’ my heart…You obviously know very little of Ron C’s writing. And if I am wrong there, I apologize. He will ruin ANY character….overlook any detail…rewrite anything from the past…as long as it helps him in his ultimate goal of pushing and pimping his “redeemed” bad guys, psychos, and murderers. Any day now, I expect Xander to have blinding headaches and a brain tumour, have it redeemed, and he will be all sunshine and rainbows, rather than the sleazy rapist and murderer he is.

Lets get one thing straight! I love Judith Chapman! Having said that, I now feel compelled to talk about how Ron Carlivati is now pulling the same crap he pulled at GH that led to that show having ALL TIME RECORD LOW RATINGS!! I will start with this Diana debacle and hopefully touch on other areas. If you never watched Days circa 1987- 1989, you wouldnt know the character of Diana. She was a spunky spitfire 25 year old journalist with a loving heart and a passion for the truth. She was a college friend of Mike Horton’s, and became… Read more »

Judith Chapman is doing a WONDERFUL job as Diana on Days. Her Diana and son Leo/Matthew give me life, classic soap acting/delivery!

I am LIVING for Judith Chapman’s appearances on DOOL. I am so glad she has a role she can run with. She is soap opera royalty and we are lucky to watch her brilliance.

I like Chapman very much and appreciate the interview. However, the article employs a HORRIBLE photo of the actress. I’ve always thought Chapman looked good and “holds” her years well until I saw this picture. That photo does her no favors.

I have to listen to this.

Diana is certainly no Gloria. Wow! I wouldn’t want to get on her bad side. Something must have happened to her after she left Salem because I don’t remember her being this bitchy. I guess having a sociopath for a son can change you!

Judith is analogous to the giving tree—–better and better with each scene!! She superseded my expectations….donna magnifica!!