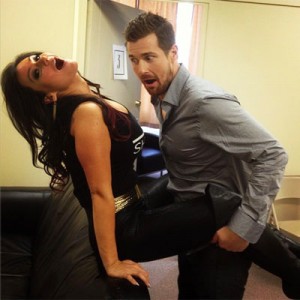 Reality star, Jenni “JWOOW” Farley’s introduction to the world of soap opera was last week on the set of One Life to Live, when she filmed her first scenes as Nikki the Bartender, which as it turns out will be a recurring role for her!  Farley AKA “JWOWW” is best known from MTV’s Jersey Shore and Snooki & JWOOW! fame.

JWOWW and One Life to Live’s Josh Kelly (Cutter Wentworth) spent a little extra time together on her first day for MTV’s Remote Control!  In this hilarious video, Kelly showed JWOWW the art of soap acting which includes these handy tips:  crying on cue, sucking face with your co-star, and bitch-slapping your co-star, which ended with a hands-on demonstration.

We also learn that Josh calls relationships with your on-screen acting partner, off-screen, “Showmances”, which was also something JWOWW came to learn, but something she is familiar with having appeared in the cast of Jersey Shore!

However, things got a bit out of control when Josh showed JWOWW, the art of the pretend soap slap.  After his brief demonstration, Kelly asked JWOWW to slap him, and she really did!”

Watch the video below, and let us know what you thought of the soap opera 101 acting tips delivered by Josh to WOWW?  And, the soon to be infamous soap bitch-slap to his face!  And remember to check out all new episodes of One Life to Live on Hulu.com starting April 29th!

Some pointed out she’ll just be a bartender but recurring means more than just pouring drinks…theyll have her do more than that im certain,(its happen to others and i doubt Shawn, Vimal, and Rama are just going to stand around and they are recurring. That would be a waste of their potrayers talent) and recurring has also led to fulltime contracts. Im not a fan of Jcows, disliked JS but thats not going to stop me from watching the reboot of OLTL if i do get to see it. For me its always the story, and if the story is… Read more »

She a decent human being. I just hope she’s at least a decent actress. Any better than Kourtney Kardashian is great in my book! lol

I love that OLTL is getting coverage on MTV! I hope it shows the MTV audiance that you don’t have to be a grandmother or bored housewife to enjoy these stories and characters.

Absolutely! If even a small percentage of The Shore’s fanbase comes aboard, it’s a win. MTV could be our secret weapon

Jwoww has 1.2M twitter followers, if a tenth of them tune in to watch her(120K), that’s MAJOR! If OLTL and AMC can average a million viewers per episode, that would be considered a megahit. CW struggles to do a million viewers for their prime time shows, and so do most cable primetime shows. If a non-primetime, non-cable tv show could average a million views/hits/downloads.. it would be considered a huge hit, and then advertisers would line up to throw money at PP/TOLN.. and then they can put more money into the shows(extend episode time) and compete with the networks for… Read more »