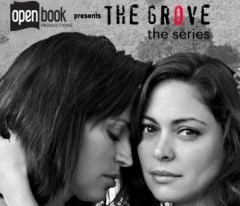 All we can say is “Wow!”  Crystal Chappell’s latest online web series, The Grove announced it’s official cast list last evening and it is filled with some of the biggest and most popular names to ever grace daytime television screens!

From what we can tell, at the series centerpiece will be Chappell and her longtime scene partner, Jessica Leccia, once again in new roles.  Chappell plays Nico and Leccia plays Ivy.   But then come the dueling families and citizens of The Grove  that will also be key and major components of the new web soap.  Yup, look for the Moynihans vs. the Kincaids!

Daytime Emmy winners General Hospital’s Laura Wright, The Young and the Restless  Michelle Stafford, Christian LeBlanc and Beth Maitland, Guiding Light’s Justin Deas and  Jordan Clarke all have key roles!  Add to that, daytime favorites formerly from Days of our Lives Peter Reckell and Nadia Bjorlin, and The Bold and the Beautiful’s Linsey Godrey, plus Venice’s Harrison White and Patrick Killian-White, and you have one talented cast!

To check the official casting announcement, go to the The Grove The Series official facebook page and there will be the reveal of who everyone will play! And for more information on the back-story of The Grove, the characters, and what is to come, visit the series website here!

So, who are you most excited about seeing in The Grove?  Let us know what you think of the casting of the series?

Greg Vaughan Going To DAYS as Eric Brady, Or Is It Another Role?

You had me with Justin Deas. It just doesn’t get any better than that!!!

I am so excited about this soap!!! I knew when Ms. CC started to put this together it wouldn’t disappoint. So happy she has Michelle Stafford, Peter Reckell, CLB, Nadia Bjorlin, & Laura Wright all in her cast along with Jessica Leccia… this is going to be fantastic!!!

incredible cast! very much looking forward to this series. plus, you can’t go wrong with the trio of CC+JL+NB!

Does this mean Laura Wright is leaving GH????????/ Since she joined the cast The grove…..

As always, I’m most excited to see CC & JL together. However, this is a great cast they’ve put together.
Thrilled to see Justin Deas on the list! So looking forward to “The Grove”.

I love Venice so I know I’ll love this also.

Don’t want to have to pay to see this….If it were OLTL it would be a entirerely different story…………..These aren’t my favorite characters..Didn’t watch Y&R or Guiding Light…………………Or The Days of Our Lives..Not familiar with those soaps…Never watched them …………………………………So I am not sure I will watch this…..

There’s only one soap that I would pay for and that’s One life to live.

This is going to be fantastic. Can’t wait. Love almost everyone involved, especially CC & JL.

(btw all you one lifers. It’s over. Get over it. We all had to move on from our various cancelled soaps. You can too. I tried to watch it. Gave it 2 months and could not abide it. There is no need to mention it ad nauseam as the standard for excellence all other shows must ascribe to.)

So excited the Talented Chappell did again! Cant wait for the grove!

I’m looking forward to more soapy goodness from Chappell and her merry gang….

“The Grove” looks incredible. Chappell has always produced quality web series. “Venice: The Series” is fantastic and I suspect this shall be too! I’d pay to watch it!!

I can not wait to see all of our favorite soap stars back on our screens !!!

Ohh nice casting Ms. chappell, this is a life long soap viewers dream come true , wow!! Beth Maitland!!! will be great to see her, and everyone else. Looking forward to it ,

So excited to see MS and CLB , and BM , great cast ! Yeah for Michelle Stafford , you don’t need Y&R , but they sure need you! You are on to better things. This is gonna be a great series , can’t wait!