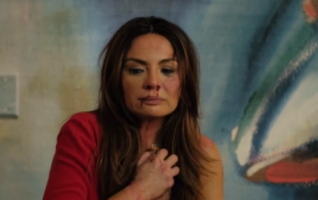 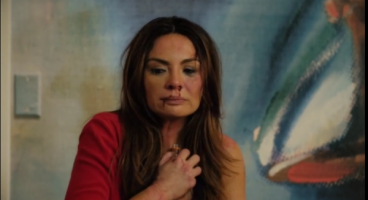 The third installment of Gregori J. Martin’s, The Bay was released late this week.

While the drama continued for Sara (Mary Beth Evans) Garrett in the big house, upon getting a visit from ace reporter Nathan Perkins (in a solid performance by Scott Bailey), later she gets gut-punched by one of the inmates, who is not too happy with her presence. Not a  good day for the leading heroine of the online soap.

However, it is the last few minutes of the episode in a scene featuring former General Hospital favorite Lilly Melgar (Ex-Lily Rivera) that pulls in the audience. Melgar’s Janice Ramos had been brutally raped at the end of last season of The Bay.

In the beginning of the new season, we see Janice bloodied, injured, dress torn, and completely undone. Now, haunted by memories of the her attacker, Chase Walker (Brian Gaskill) Janice goes down a dark path! First, we see her grabbing and downing tiny bottles of booze to numb the pain!  Not good, considering her penchant for drinking in the past.  Next, we see her getting into the shower trying to wash away the rape … bloody, emotional, and crying, Janice is alone and is living a woman’s worst nightmare.  Melgar delivered in these moments a raw emotional turn that stood out within the episode.

Watch Melgar’s performance, and the rest of episode 3 of The Bay after the jump!  Then, let us know what you thought of the harrowing moments for Janice Ramos as played by Lilly M.?

Jason Thompson Relates To GH Scrubs Fans: "You Kept The Fire Stoked For Many Years. I Hope You Enjoy The Next Month Of Story."

RATINGS: GH Nudges Ahead Of DAYS For #3 Spot While Both Soaps Show Gains!

I’ve never watched The Bay before but after this I’m going to. I love so many of the cast and after this one episode I’m intrigued.

I never have either, but one thing that struck me is…why can’t network soaps look like this? Guiding Light used extensive location shooting in its final years, and I loved it. The typical three wall soap sets look positively antiquated and very cheap now. Traditional soaps should look to some of these online shows for innovative and cutting edge means of production and financing.

How about Lily Melgarnreturns to GH? She could have somehow survided the bomb, be revealved as Carlos’s sister and maybe help him somehow to hide Sabrina ..until Sonny, who wants to help Michael , finds Sabrin and finds Lily!!!

GH had their chance with Lily Melgar. They put in her in the middle of a love triangle with Sonny, Brenda and Lily. Lily stole every scene she was in. Vanessa Marcil was an amateur compared to Lily Melgar. It was always very clear, in my opinion, that Sonny and Lily belonged together. But what did GH do? They killed Lily.

What a great performance by Lily Melgar.

Great acting! Unless the rapist is known by the victim, all the evidence went down the drain. There is a nationwide rape kit backlog. Would she have felt violated again with questions by the hospital and police department?

Great question Lillian! I agree the acting by Lilly ( Janice Ramos was off the charts! The Bay has grown so much over the years! I really enjoy all the locations they film at .Makes my Bay! What a great cast of Soap Veteran actors &newbies whose characters know how to bring the #Bayhem