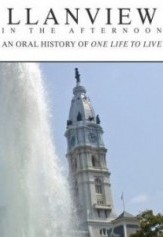 If you have watched One Life to Live  over any, or all, of its over four decades of existence, and want to get a glimpse of what it was like throughout all the different casting, writing, and producing regime changes, and read some never- before- known moments that happened on the set, and behind-the-scenes of one of the most iconic soaps of all-time, then you should order your copy of the just released paperback book or kindle version of  Llanview in the Afternoon: An Oral History of One Life to Live by Jeff Giles!

According to the official book description, “During its more than four decades in the ABC daytime lineup, One Life to Live told countless stories, from sensational adventures to thoughtful social commentary. But the tales that went untold — the experiences of the writers, producers, cast and crew behind the scenes — are just as fascinating as any kidnapping, baby switch, or courtroom confession.

Today, network soaps are struggling for survival against cheaper-to-produce talk shows and reality series, but their cultural impact resonates more strongly than ever — and a tribute to the work that goes into producing them is long overdue.   To that end, Llanview in the Afternoon: An Oral History of One Life to Live focuses on some of the most unique aspects of working on a five-day-a-week television series — from the actors, who had to deal with the daytime stigma and the psychology of living so intimately with their characters for extended periods of time, to the crew, who produced scripts and episodes at a blistering pace while working with a dwindling pool of network resources.

Featuring interviews with more than 50 One Life to Live veterans, including: Erika Slezak, Robin Strasser, Robert S. Woods, Hilary B. Smith, Ilene Kristen, Kassie DePaiva, Michael Storm, Judith Light, and Nathan Fillion — plus many more Llanview in the Afternoon: An Oral History of One Life to Live offers readers a one-of-a-kind perspective on one of television’s longest-running shows.”

In addition to those mentioned above, check out these blasts from the pasts who all participated in interviews in which portions of those are contained within the framework of the book including:  Steve Fletcher, Margaret Klenck, Brynn Thayer, Anthony Call, Ellen Holly, Joe Lando, Roy Thinnes, Jack Betts, Roscoe Born, former OLTL producer, Linda Gottlieb and head writer,  Michael Malone, and OLTL creator, Agnes Nixon!

In an exclusive excerpt, Erika Slezak talks about her former leading man, Clint Ritchie’s (Ex-Clint) problem with alcohol which at times apparently disrupted the set,  “When he was drunk, he was just appalling. In 40 years, I stopped scenes maybe four times, and one of them was with him.  Clint was supposed to pick up a chair and move it during the scene, and he ended up throwing it — and it hit me. Not hard, but it hit me. And I said, ‘Okay, that’s it! Stop. I cannot do this, and I will not do it anymore.’  My husband happened to be at the studio — God knows why he was there, but he was downstairs, and he came up, standing offstage, ready to fight for my honor. [Laughs] Clint said, ‘What? I said, ‘You threw the chair, you hit me with it, this isn’t what the scene’s about –‘ Clint didn’t say a word. They didn’t stop the cameras, because they thought I was acting! They’d never seen me get angry before. Finally they cut, and there was a terrible silence.”

So are you interested to get your copy of Llanview in the Afternoon:  An Oral History of One Life to Live! Let us know!

THE TALK: Julie Chen States, "For The Record, I Have Never Had A Nose Job!" Sharon Osbourne On Her DWTS Ballroom Breakdown!

LATEST RATINGS: All My Children and One Life to Live on OWN!

At this price I will buy..

Llanview in the Afternoon: An Oral History of One Life to Live
Amazon Price.

I think I also would like to purchase the book. Erika’s story above is refreshing. The audience always get these glowing stories from the publicity office about how everyone always get along and are like family. Families fight and there are some members who are not always liked. I think it would be good for the public to know all the blood,sweat and tears that has gone into making one of the best drama to ever be on television.

Will be buying the paperback version…

Looking forward to getting my hands on this and devouring it!

Defintely getting this! Most interested in the Gordon Russell-Doris Quinlan/Joseph Stuart years when OLTL was a true ensemble piece. Love the days of the Woleks, Craigs, Siegels, Vernons, Carla & Ed, and Pat Kendall. What amazes me is during this period, the show endured through countless recasts in a relatively short period (Anna, Tony, Vinnie, Wanda, Karen, Will, Dorian, Becky Lee, Richard, Brad & Jenny). Wasn’t much interested in the horrid Rauch years and beyond (never cared much for the Buchanans, Viki as the main heroine, or shrill Tina).

So great to hear those characters names again , thank you. The story had so much heart and soul in it then. It took me 20 years to get with the Buchanans. God bless!

Sounds like a good read. Is the later history covered? I only started watching the show in like 2001.

I will absolutely buy this treasure. I have watched OLTL since day one and have loved all the twists and turns and all the amazing characters and actors I’ve watched throughout the years.

Just ordered the book! Hope you are enjoying it.

By the way, thanks Michael, for bringing it to our attention.

So there maybe footage of this lying around somewhere?

Definitely buying it. Best soap opera ever. No other soap opera has more heart and soul. Prior to ABC canceling OLTL, it had higher ratings than General Hospital. Considering the failures of Katie and the Revolution, ABC should strongly consider buying back the rights for OLTL from Prospect Park. Prospect Park could use the money to invest in AMC. ABC should relaunch OLTL on its network. It should relocate OLTL to LA near the GH set. It should also have Frank be its executive producer and have Ron hire writers for the show and supervise them. This would allow cross… Read more »

ABC will never relaunch AMC or OLTL never.
You could sell your soul to them and it still would not happen.
ABC has 1 blockbuster daytime soap GH and that is all they need for their daytime block.

not looking to sell my soul for either, thou.

Gentry………….. Where have you been? LOL!!!!! ABC/Disney still owns the rights to AMC and OLTL. That’s the problem. They own both of them, won’t sell them, so no one else who has the capability to do so can put them back on television the way they used to be. We have been making our voices heard and making their lives miserable since April of 2011 when they announced that they were cancelled!!! If you’re on Facebook, why don’t you check out Soap Fans United and some of the other “soap warrior” pages to see what we’ve done. I, for one,… Read more »

Anybody know what the books cover picture would represent??
To me it’s a ”huh?”

I downloaded it on my kindle the other night have not read it yet sounds good I miss OLTL I think ABC just wanted Ron and Frank for GH So that meant the down fall of OLTL. the plot thickens