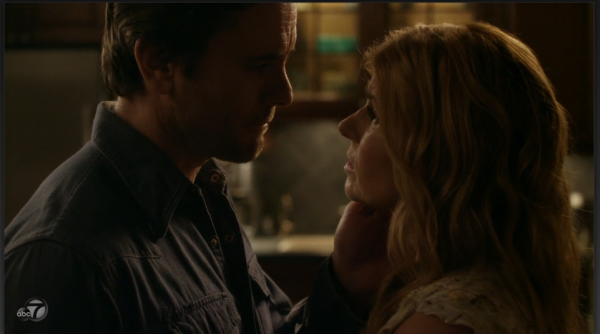 There were plenty of emotional cliffhangers in last night’s season two finale of ABC’s Nashville!  The big one, who will Rayna (Connie Britton) choose as her man?

After Luke Wheeler  (Will Chase) proposed to Rayna in front of a concert crowd, which either was the most romantic, or self-servicing, thing he has ever done, Rayna dumfounded basically says, “Yes” and wants to get off the stage!  But she seems genuinely in love!

Cue Deacon (Charles Esten)!  Over the season two finale it was apparent that Deacon is truly thinking about the family he could have had with Rayna and daughter Maddie.  When Deacon is witness to the marriage proposal by Luke, later he springs into action.  And in the final minutes of the episode, he comes to see Rayna. Deacon tells her he wants her back! He move in to kiss her…  and gives her back the ring he gave her!  Yup, it’s Rayna’s choice now! Will she choose the love of Luke?  Or, the deep-rooted love and history she shares with Deacon?

And in other big developments, Will (Chris Carmack) finally has had it,  after losing the promotion for his record while in New York, and then later being contacted by the handsome gym trainer,  when Will heads back to Nashville he goes to see Gunnar (Sam Palladio) and his best friend implores him to stop lying to himself and everyone and admit he is gay.  Next thing you know, Will heads over to the apartment to see Layla trying to stay away from all the cameras in the house  from their reality show!  He takes her into the bedroom where he tells her that he is gay!  She looks horrified, but there was  a tiny camera in the wall/ceiling that captured his admission.

As for Avery and Juliette, Avery found out from Gunnar and Zoey that Juliette slept with Jeff Fordham (Oliver Hudson). That prompted a a great scene between Jonathan Jackson (Avery) and Hayden Panettiere (Juliette) about knowing how to love someone.   In the end, as of now they seem to be on the outs as Juliette seems to be always in self-destructive mode if she feels she is about to get burned!

And in the beautiful song and montage near the end of the season finale, Gunnar sings the song for Scarlett  (Claire Bowen) he wrote for her when she was recovering from her breakdown.  Scarlett came to say goodbye to Gunnar.  Next, they sing in beautiful harmony. Gunnar asks her to reconsider and not leave Nashville!  Is there hope for Gunnar and Scarlett yet?

What did you think of the Nashville season two finale? What was your favorite part? What didn’t you like?  Let us know!

I loved the whole thing!!! SO GLAD THEY ARE COMING BACK NEXT SEASON111

I thought it was a great season finale episode and sets things in motion for next season.I think Rayna will stay engaged to Luke but fight her feelings for Deacon up until the wedding which i’m sure will happen sometime next season.

Last night’s show was pitch perfect and beautifully acted. Jonathan Jackson is such a gifted actor as is Hayden Pannettere. Those two enjoy an amazing chemistry. I enjoyed everyone’s story last night and the music was very good. Nashville is serving up some great night time soap which we all could use given what GH and Y&R are handing us these days,

I’d be torn too. I, like I think everyone else…love Deacon! But i have nothing against Luke. I believe he genuinely loves Rayna, he’s talented, good-looking and always has her back. I think I’d actually like if he double-crossed her, LOL, so I could feel good (without conflict) about her going back to Deacon! I do prefer him….but I’d feel bad for Luke. Hope Juliette and Avery work it out…hope Scarlett stays in Nashville (and on the show)…seems they teased a possible rekindling of Scarlett and Gunnar…would love that too but again, would feel bad for his current gf (whose… Read more »

Quite the satisfying finale and kudos to HP and JJ. I also am very impressed with the work of Lennon Stella as Maddie. not only a lovely young actress but has the musical chops to go in either direction. Her on screen relationship with CE and CB is written and portrayed with a realistic sensitivity. I felt her hope at a possible uniting of her parents crushed as she watched her mother accept Luke’s proposal. It wil be interesting to see what headaches she causes for the adults in her life next season. As someone who isn’t that big a… Read more »

Very happy with the finale..Fantastic acting and writing..This show seriously needs to get some emmy nods, especially the cast and writers.

I’m sooo torn, because I LOVE Deacon and I’ve been rooting for them from day 1. But I really like Luke too, I also liked Liam. The problem is Connie B. has such great chemistry with everyone on screen. It makes it hard to choose. But I loved Deacons confession. Oh man, was that great romance.

Really rooting for scarlett and gunnar I loved those 2 season 2 really pissed me off. I loved charlie and Juliette but love Avery and her for the long hale maybe charlie will come back if Avery and Juliette break up for a short while idk. I like Luke and ranya but let’s be honest we all no who ranya is going to end up with. But I loved the way they ended it with gunnar asking scarlett not to leave that was beautiful and u just saw all the love they have for eachother come back I just hope… Read more »

That episode was amazingly perfect! While I am sad that Avery and Juliette broke up I’m kinda hoping they are bringing back Charlie to the next season. I thought he and Juliette would’ve went better together and plus I’d like to know a little more about him. I don’t know I don’t like it when characters are introduced and then leave. I wanna see them grow and change and evolve and I wanna badly see that happen with Charlie. Plus that could be a really good story-line with him involved cause his Ex-Wife could be jealous and make the lives… Read more »