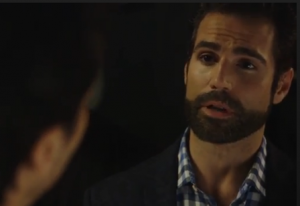 A new dark and sexy look into the South Beach, Florida music scene is ready to premiere exclusively on Hulu starting next week and streaming all six episodes of the series beginning on July 29th.

That is when South Beach will bow featuring two actors very well-known to soap audiences in major roles in the cast: The Bold and the Beautiful’s Jacqueline MacInnes Wood (Steffy) and former All My Children and Guiding Light star, Jordi Vilasuso. South Beach produced by Dolphin Digital Media is set in an affluent Miami neighborhood, and follows the aftermath of a murder that appears to signal the return of a serial killer thought to have been killed two decades earlier.

In addition, AOL has partnered with Dolphin Digital Media and will post exclusive content leading up to the South Beach Hulu online premiere including: cast interviews, as well as lifestyle features showcasing Miami’s distinctive fashion, music and nightlife. Verizon is is also on board as the prime sponsor of the series.

“We’re very fortunate to have a captivating script, a stellar cast and the perfect setting for this fast-paced, dramatic series,” said Bill O’Dowd, CEO, Dolphin Digital Media in a statement. “With our premiere on Hulu this summer, we’re excited for viewers to dive head-first into this guilty pleasure world of love, betrayal and revenge. We couldn’t ask for a better anchor sponsor than Verizon, and we’re excited about the cross-promotional support from AOL.”

Watch the trailer for South Beach after the jump, and let us know if you will be checking out Jacqui and Jordi in their latest roles on July 29th?

GH's Ryan Paevey Posts Update Since Breaking Wrist: "Ditching The Cast And The Donut Beard, Back To Work!"

AOL??? I thought they were done and over…LOL…SMH..but that’s not the point of this article…just surprised me.

I’ll be watching it because J.M.W. (Steffy) is on. She is so beautiful and one great actress. Jordi V. is one of my favorites too. Loved him on Guiding light.