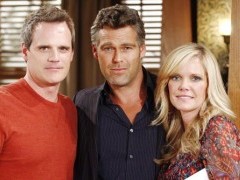 National Public Radio’s, All Things Considered this weekend had as it’s guest, former As the World Turns writer, Peter Brash, for a segment on:  if the end is near for soap operas, and what has caused it’s decline.  The audio interview was about 3 and half minutes, but on the NPR website, they also posted an accompanying story and excerpts from the interview including the following below!

“Hardly anyone these days admits to watching soap operas, but they once dominated the daytime TV schedules.  Forty years ago, there were 18 soaps airing on the major networks; today, there are only six. Next month there will be one fewer when As the World Turns signs off after more than five decades on the air.  Peter Brash, a staff writer for As the World Turns, tells NPR’s Audie Cornish that the soaps are really victims of their own success. “The serialized format has spread out just about everywhere you look,” he says. Four decades ago, most shows presented a self-contained story every week. But now, “it’s all branded to hook you in, to tune in tomorrow. “That means you can get your drama fix any time. You don’t have to sit at home all day and devote five hours a week to keeping up with all the illicit affairs, car wrecks, secret babies and evil twins with amnesia.  Brash says the soaps were all about women — but hardly any women are watching anymore.

Reality television isn’t helping either, Brash says. “They’re soap operas in themselves They’re just — real. So the audience is savvy enough to know they’re watching one that’s real — ‘Oh, she’s really pulling her hair,’ and ‘Oh my god, she might hurt her” — and one that’s staged. So which one becomes more compelling?”

Brash has written some compelling story lines of his own in 30 years of writing for soaps. “Once, I was responsible for having two naked people fall from a meteor shower. They seemed to be from another planet, and they ran around naked one summer in Salem. I probably should have told the audience right away that the mad scientist in town had just put them up in a rocket ship and they really weren’t aliens. It’s always better if the audience is in on the joke in that way.”

Traditional soaps — naked mystery aliens and all — may be on the wane, but Brash says their influence is felt all over the television dial.  “Soap operas are kind of lending their DNA to the rest of the entertainment media world, and that includes dramatic and reality [shows].  So I don’t think it’s a dead medium; it’s just morphing into different things.”

Related Topics:All Things ConsideredAs The World TurnsNPRPeter Brash
Up Next

Want to Know What's Good on the Soaps? – Power Performances of the Week!

Sadly, I think daytime soaps are dead or at least will be completely in the next 3-5 years, because they have refused to evolve and change. The dialog is weak, the storylines are often confusing, repetitive, and sadly bad. But, most critically, daytime soaps have committed the ultimate sin. They’ve becoming boring. Their storytelling has not really evolved since the 80’s. And with the current crop of continually recycled headwriters (I mean typically when a person gets fired from the top post at a job, they are lucky if they get another shot at a similar job, they don’t tend… Read more »

The main problem with the decline of soap operas is that the writers can’t or won’t come up with new stories. They keep recycling the same old stories that were on 30 years ago. Times have changed & the stories should change too. If the soaps that are still on the air after ATWT goes off on Sept. 17th want to stay on the air they need to take a good long look at what stories they are writing. People get tired of the ridiculous find out you have a twin 20 years later, or didn’t remember giving birth only… Read more »

This is my newspaper column in our hometown this week … I thought I would share it with you guys. Elegy for the End of the “World” “Good morning, dear.” Those were the first words spoken by actress Helen Wagner, who portrayed matriarch Nancy Hughes until her death earlier this summer, on the afternoon of April 2, 1956 as CBS-TV premiered the first 30-minute daytime drama live from New York City – AS THE WORLD TURNS. A production of Cincinnati soap and cleaning products giant Procter and Gamble – the company that gave this genre its nickname – ATWT was… Read more »

OK, I’m being biased here. My favorite soaps are One Life to Live and General Hospital. Following the thrilling GH episode of “the Balkin” situation, GH seems to have temporarily gone downhill, but OLTL is still kicking high, in my opinion !! On All My Children, I admire Susan Lucci for her longtime commitment , but I eventually grew tired of her main character not holding on to at least ONE husband, plus many of the storylines just centered around her. I’m glad ABC at least decided to not cancel OLTL until January 2012. Better yet, I hope they will… Read more »