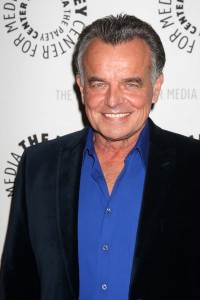 A very bad man is coming to Genoa City and it could turn the lives of many of its citizens upside down! Chief among them, Dylan McAvoy (Steve Burton) and Nikki Newman (Melody Thomas Scott)!  Of course, we are talking about the character of former cult leader from the 70’s, Ian Ward as played by Ray Wise!

Wise, is no stranger to devilish roles having played Leland Palmer on Twin Peaks, who was revealed to the the actual murder of his daughter Laura, which was the epicenter of the whole series.   Ray is also known to soap fans for his role as Jamie Rollins on Love of Life!

Wise spoke to TV Guide Magazine’s Michael Logan about his emergence in GC when he debuts on the January 23rd episode of the sudser that will cause trauma and drama for Ian’s son, Dylan and the mother of his child, Nikki!   Here are a few interesting excerpts below!

Ray on why Ian has come to Genoa City:  “I can’t reveal his big secret reason for coming to town — what he really wants — but he certainly hopes to reestablish a relationship with the beautiful Nikki. Once upon a time, she felt a little something for him. He thinks he can override her fears and get that back. He’s a very confident fellow.“

Ray on what Ian is doing now that he went to prison for his past crimes as the leader of the New World Commune back in the day:  “He has since become a self-help guru and author who’s now heading an organization known as The Path. He’s very busy passing out business cards and promoting his cause. If you want to find the path you are meant to have, come to one of his seminars!

Are you intrigued to find out how Ian’s entrance on the canvas will shake-up Genoa City?   Let us know!

Michael Muhney Fans Ban Together To Raise Funds To Fly Banner Over CBS In Protest Of His Dismissal!

Didn’t Eric Braeden and Ray Wise both play the part of Robin’s father on HIMYM?

Yes. And I loved them both in that part.

He’s a talented actor and while I’m not a Dylan fan, I think Ray Wise will be very good in this role.

Nikki at one time had love for Ian, she thought she was his one and only (silly girl) when she found out Ian had others, that is when she left the commune and Ian..

So– I think it would be great story if spanks fly between the now older mellower , changed two..

Finally Y&R has a real villian.

I can’t wait for the story as it pertains to vet character Nikki.

As for Dylan’s part of this story, since he’s still a newcomer to the show (less than a year still), the majority of my interest doesn’t involve Dylan.

Can’t wait to see Victor and him go at it though.

While I could not care less about the whole Dylan storyline (in fact, he can go back to Afghanistan and I won’t miss him!), I am MAJORLY looking forward to the whole, sordid story between the teenaged Nikki and former cult leader, Ian Ward! Ray Wise is a fantastic actor, and his character’s background, including prison time, should be very rich and colorful. I’d like to know that there are still residual feelings between Nikki and Ian (especially someone who was charismatic enough to get people to join a cult and then woo the women into bed!) and see if… Read more »

HELL TO THE YEAH!!!!! As far as I’m concerned, ENTER Ray Wise and EXIT Steve Burton. I (for one) have had quite enough of dull-as-dishwater Dylan (and his portrayer Steve Burton). Ray Wise…WELCOME ABOARD SIR!!!!!

Sounds intriquing!!! I will be watching!!!

One legend is moving into another legend’s previous home.  Sources are reporting to The Real Deal, that Los Angeles Laker and NBA star, LeBron James has purchased the estate of the the late, Lee Phillip Bell, the beloved co-creator of The Bold and the Beautiful and The Young and the Restless.

According to the report, James is in contract to buy Bell’s estate which was being marketed at 39 million.  It was unclear what James is paying for the 13,000-square-foot property, which sits on a 2.5-acre plot and boasts seven fireplaces, a pool house with two baths, lighted tennis court, and screening room.

This is the third L.A. County mansion purchase for James, who signed as a free agent with the L.A. Lakers in the summer of 2018.  LeBron previously bought two homes in Brentwood, California for 23 and 21 million dollars.

Lee Phillip Bell passed away in late February of this year.  She was remembered during the just completed 47th annual Daytime Emmys In-Memoriam segment on the telecast on CBS.

So, what do you think of LeBron moving into the renowned soap opera creators home?  Comment below.