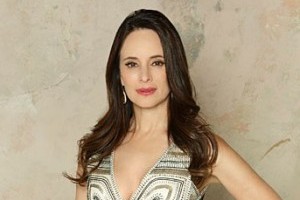 ABC’s Revenge is set to return for it’s fourth season on Sunday night, September 28th at 10PMET/9CT.  And now the first teaser promo for the new fall season has been released which is all about Victoria (Madeleine Stowe) recalling how Emily (Emily VanCamp) destroyed her life since the gal set foot in the Hamptons.

When we left off Emily AKA Amanda, put Victoria in the nuthouse!  In this promo, you hear the voice-over narrative of Victoria ready to come after Emily for payback  … as soon as she gets out of the mental asylum that is!

Meanwhile, as previously reported, Brian Hallisay has been cast in the role of Ben who just might be  a new love interest for Emily!  Does this mean once again Jack (Nick Wechsler) and Ems won’t be together?

Well,  according to Revenge showrunner Sunil Nayar who told TV Line:  “In the scenes they’ve had together so (Brian and Emily VanCamp) far, they’ve had great energy.  But we want to take our time with these things; Emily has so much she’s already dealing with, we don’t want to be casual about the next person she chooses to give her heart to. That said, there’s definitely an energy between them that we’re enjoying. We didn’t bring him on to be Emily’s love interest, but by the same token, we didn’t not bring him on for that.”

Watch the “Victoria” promo below!  Then let us know if you want Emily with Jack? Or, do you want to see if  a love connection and spark exists between Emily and Ben?

GENERAL HOSPITAL: Is Frisco Jones The Bio-Dad Of Levi Dunkleman? What Is The Connection?

I just hope the season isnt narrated by Victoria.

The sound of her voice angers me, lol.

I love Revenge and loved the original premise, but this seems a bit ridiculous. Maybe it should have ended last season with Emily’s revenge complete and ending up with Jack. Often, too much of a good thing goes stale.

End game: Emily and Jack. But I’m all for interesting twists and turns in between.

Faux-manda needs to come back and get her revenge.

LOL..If everyone who was wronged on this show came back to get their revenge it would be on the air for decades! Poor Emily (the real one), Declan, the man who hid as a woman and then got blown away, Conrad, Pascal…and Aiden. Sigh…would love Aiden to come back, but unless he glued his eyes open at the end for effect I guess that’s not meant to be…