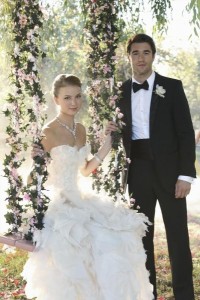 On last night’s episode of ABC’s Revenge, it was the final set-up and episode before the midseason finale which airs next Sunday on December 15th! (9PMEST/PST)! As has been teased from the beginning of the season in the flash forward, Emily (Emily Van Camp) will get shot after her wedding to Daniel (Josh Bowman).  But who will be the culprit in this major takedown that Emily AKA Amanda has set up to destroy the Grayson clan,  in what is supposed to be her final act of revenge?

There were some huge developments on last night’s episode entitled “Surrender” that indicate things are not going very smoothly for Ems!   First off, after getting gun powder residue on Victoria’s (Madeleine Stowe) bracelet to set up her arch enemy in her shooting, Victoria at the end of the episode hands Emily her invitation to the wedding saying she is declining to attend!  Emily is left in a real quandary! Did her plans just go up in gunsmoke?

Elsewhere, the return of double-crossing Lydia (Amber Valletta) spells trouble for the revenge-seeking Emily/Amanda too!  After reconnecting with Conrad (Henry Czerny), and letting bygones be bygones ( and that’s putting it mildly), Lydia takes a gander at the photo album  from that Hamptons soiree over a decade ago, and noticed Emily in black wig serving champagne! Has Lydia figured out who Emily really is?

And what about Aiden (Barry Sloane) proposing to Emily in that candlefest?  And … Emily accepts!  So, does this mean that the true love in her life is truly Aiden?   Next, after he slips a ring on her finger, she has to put back on the ring from Daniel …  after all she is marrying the Grayson man which is crucial to her plan!   And speaking of Daniel, he has a heartfelt goodbye with Sarah (Annabelle Stephenson), who breaks it off with him and hands him back the necklace he gave her.  Since Emily is pregnant, she can’t be a a part of his life. After a teary exit, Daniel drops the necklace in the water!  Is that said necklace going to show up in the waters near where Emily is shot next week?

In addition, Margaux (Karine Vanasse) comes to Jack (Nick Wechsler) after a tip from Nolan (Gabriel Mann) to find out what he is hiding.  Jack admits Conrad Grayson is responsible for the death of his late wife and his brother! Margaux tells Jack she cares about him more than revealing this story to the world and landing them both in trouble.  They kiss and hug.  Is she sincere?  Is Jack truly done with Emily AKA Amanda?

So, what do you think of last night’s episode of Revenge?  What do you think will go down at Emily and Daniel’s wedding? Who will shoot Emily?  Will her entire plan backfire?  Weigh-in!

Because this is such a beloved daytime soap opera.

Michael Fairman On Air On Soaps… ALL soaps… Fairkan focuses on daytime, yes, but back in the heyday of the 1980s, our daytime press also included DALLAS, KNOTS LANDING, FALCON CREST, and others among their coverage and awards. We who love dayitme loved those nighttime programs, too, just as we enjoy REVENGE and NASHVILLE now. For daytime drama to continue to flourish, we need to embrace the prime time serials, too. I like to believe we would not have prime time serials without daytime’s bold and pioneering work through the decades. It is just fine Michael covers our nighttime shows,… Read more »

I think this show was surprised by the hit it became in the first season and now it can live up to the hype that it caused, it’s become silly and boring, blah blah blah.