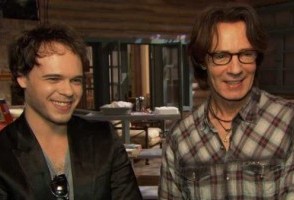 As previously announced Rick Springfield is returning to General Hospital but is it to reprise his role as Dr. Noah Drake, or Eli Love, or to play himself? And, this time he is not coming back alone, he will be accompanied by his real life son, Liam Springthrope!  Liam has been cast as an undercover cop.

In this new interview with Access Hollywood, Rick related as to what he will be doing on-air:  “I haven’t seen a script. I have no idea if I’m, Eli Love or I’m Noah Drake, or,  I’m Rick Springfield.   I have no idea what I’m gonna be this time, but I’m open‘cause the 50th, I will do whatever you guys want.”

Rick said he does expect to perform at the upcoming Nurse’s Ball, the big “GH” charity event that the character Sabrina Santiago is reviving.

As for some Liam’s first foray into daytime, he admitted he never watched his father back in the day on GH, “I did not, but it’s been really great. I’ve had a really pleasant time here and everything is, so far, going very smoothly. It’s been very exciting to kind of branch out and start doing some television!”

Watch the clip with Rick and Liam after the jump, and then let us know, who do you want to see Rick play when he returns to GH? How will Liam be involved in story? Weigh-in!

GH's Kelly Thiebaud On Crutches! What Does That Mean For Britch?

I want him to play Noah. Noah and son Patrick had some great scenes together, plus id like to see him rekindle his romance with Bobbi. I also would like him as ELi. Eli could preform at the nurses ball, and sing Jessies Girl. While he sings Jessies Girl the show could play tribute to the late Emily Mclaughlin with photos of her as Jessie. And his realife son playing the undercover cop revealed to be Eli’s son.

He could play both Noah and Eli. It would be cool if his real son played Eli’s son on the show even if their stays are brief.

This is gonna be soooo good..
I’m ready for the Ball!!!
It’s great to have so many of the loved vets back!!!

it would be nice if he played noah because it would be good for patrick since it’s the first anniversary of robin’s “death”……….

I have been watching from day one. Miss Tony and Sean and Tiffany and Alan and so many more and so thrilled to have all the oldies back. Get rid of Sonny and Kate and Brit and make room for Bobbie and Noah!! This is so wonderful watching every day. Thank you for my favorite guilty pleasure!! You need to do an in memorium to all those who have passed on. Don’t forget Dr. Hardy, Jessie and Amy too.

And kill the vampire story!!