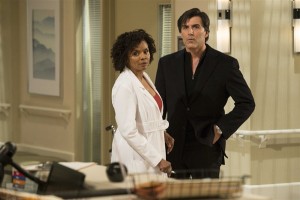 Over the past three days including today, there has been a mass media-blitz happening in print, television, online, radio to make the public aware of the excitement of the return of All My Children and One Life to Live tomorrow!

On-Air On-Soaps has put together a round up of some of our favorite quotes from various news sources that have run since Friday with One Life’s Robin Strasser, Jennifer Pepperman, Jerry verDorn and Shenaz Treasury and AMC’s Vincent Irizarry, Rob Scott Wilson, Ginger Smith, as well as Prospect Park’s Rich Frank.   Here they are below!

One Life to Live’s Robin Strasser (Dorian) spoke to Huffington Post about her feelings on ABC killing OLTL only to have Prospect Park resurrect it!  “I enjoy holding a grudge. I carry grudges like excess baggage. OK, I’m not wishing personal or family harm, but a badass mistake was made that shot down a lot of jobs, careers and two fabulous shows. If, at some point, they own their mistake or karma’s a bitch and comes around, then so be it. At least I’m sane enough to know I’m not in charge of that.”

One Life to Live’s executive producer, Jennifer Pepperman told The Associated Press when discussing the exciting online return of the beloved series,  “This is a second chance.   It is a wonderful gift.”

Prospect Park’s Rich Frank explained to The Associated Press how the new OLTL and AMC are very much like TV shows! “These are not webisodes. We are shooting television as everyone knows it. This is traditional TV storytelling distributed a different way — and it’s a superior way.”

All My Children’s executive producer Ginger Smith told The Associated Press how she was able to lure top-notch talent back to Pine Valley:  “With every former member of the cast, staff and crew, when I called them they said, ‘We want to get in the trenches with you.’ When I called Cady McClain, she said, ‘Where do you want me and what time do you want me there?’”

All My Children’s Vincent Irizarry (David) spoke to Today about the series ABC finale cliffhanger that will resonate on the new revival:  “That moment took on significant impact in David’s life.  We’re going to see the effects of that (based on) what took place that night at Brooke and Adam’s party. That event continues to propel David forward in the weeks, months and years ahead. He’s going to be that character that viewers know and love to hate.”

One Life to Live’s Jerry verDorn (Clint) spoke to the New Jersey Herald on the shows comeback, the ABC cancellation and getting to be with the core cast of Llanview once again :  “It (the show) looks better than on ABC. The way the show looks it is high quality. I am very pleased …  It (the cancellation) was emotionally tough. I was sorry for the crew … I was elated to be rejoining my friends! … This is very dear to my heart. I remember when I was breaking in, actors would tell me about the transition of shows from radio to television  ….I think this is similarly historic. I’m glad to be part of the changing of the guard.

All My Children’s Rob Scott Wilson (Pete Cortlandt) spoke to The Boston Herald.com citing,  “Working with Jill Larson,  who plays my mom on the show, is a blessing.  She makes it so much easier. I have great conversations. I’m in love with Cady McClain and Julia Barr. They welcome us with open arms. If we are overwhelmed, they calm us down.”  Wilson also spoke of his knowledge of soaps! “I grew up with my mom and my grandma, so I watched a lot of daytime.  I was forced to watch with them when I was a little kid. Now, I get to reminisce about that. I know my mom and my family are so excited for me to be a part of this.”

One Life to Live’s Shenaz Treasury (Rama) told Variety in regards to the new shooting schedule which often times goes well into the night:  “It has a feel like it’s new and fresh.  I don’t think we’ve cut back on anything.  16-hour day feels like a luxury for me!”

So AMC and OLTL fans, which quotes did you like the best from the above?  Are you optimistic that the shows can have some legs once they are up and running with all-new episodes tomorrow?  Share your thoughts!

The Florencia Lozano and Kelley Missal Interview – One Life to Live

After seeing the episodes Tuesday this resonates with me….

“Prospect Park’s Rich Frank explained to The Associated Press how the new OLTL and AMC are very much like TV shows! “These are not webisodes. We are shooting television as everyone knows it. This is traditional TV storytelling distributed a different way — and it’s a superior way.”

and Robin was fabulous as ever.

Gotta Love Robin! All the quotes were awesome! Loved them all! Thanks Michael!

Leave it Robin to have the sassiest quote. Love it!

Robin had the nerve to say what she feels without worrying about any Disney/ABC bridges she may be burning. Props!

I also love that the new One Life To Live gave her a line “Screw your reality show. This is my life!”

Rich Franks and Jerry verDorn were the best!!! Thanks Michael… can’t wait!!!

I’m counting the hours. Will probably have to watch the first episodes several times because I know I’ll be overcome with tears of joy. I have missed OLTL like my dearest relative. And why won’t I? I’ve watched since the original debut, July 15, 1968. I’ve watched AMC off and on over the years and now will become a regular viewer.

All the quotes are wonderful. Robin Strasser, you took the words right out of my mouth. I love you.