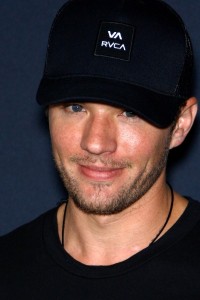 One of the most memorable social issue storylines in the history of One Life to Live and daytime television occurred in 1992-1993 when the show brought in the teen-aged character of Billy Douglas, who turned out to be gay.  The actor who portrayed Billy was none other than motion picture star Ryan Phillippe in his then first professional acting role.

The tapestry of the gay storyline on OLTL also featured Billy’s relationship with a priest which was put into question, and that dove-tailed into the AIDS quilt appearing on the series, when it became part of a heart-wrenching storyline.

Promoting his new film, “Wish Upon”, Ryan chatted with TooFab,  where he discussed his role in Llanview some 25 years ago: “I remember the fan mail that we would get, my mother and I would get, from gay teenagers or from parents of gay teenagers who found a way in to relate to or talk to their child through the show.”

Ryan spoke to the power of the TV medium and how can impact people’s lives: “It can make people think differently or see a different side of something and I do remember and appreciating that — even back then when I was only a teenager myself.”

The talented star admits that at the time he did not have a full understanding of what playing Billy Douglas meant at the time, but he does so now: “In terms of like the larger view, I didn’t have a full understanding of how important it could have been. But I’m proud to have done it, I’m proud that that’s something I can say was a part of my career.”

Watch Ryan talk OLTL and the Billy Douglas storyline after the jump. Then let us know if it was one of the best social issues stories ever told on soaps in the comment section below!

I have very fond memories of the Billy Douglas story. The story was told very sensitively and courageously. Ryan and the entire cast did a terrific job. As always, our beloved One Life to Live informed and generated thought while keeping us entertained. I miss One Life to Live every day.

OH, I miss OLTL too, especially when the series delved into social issue stories. Agnes Nixon created such wonderful programs that served as platforms for entertainment and discussion. They say this is a golden age of television but it seems daytime drama is being left out. Only four soaps left on the air. Shouldn’t the genre be enjoying a revival with all this opportunity for original programming on broadcast, cavle, and streaming services?

So happy that this snippet of the interview has been posted here!

My admiration for Ryan Phillippe has been further cemented… The gay teen storyline was a major groundbreaking, influential effort; it was an incredible experience. Over the years, OLTL broke ground on occasion and, needless to say, had some terrific storylines and characters. This was one of the show’s finest hours. I am so thrilled I was exposed to, and affected by, it…

As a gay man in his 20s at the time, I was proud that OLTL had the storyline.

I seem to recall the original idea was for Joey Bucanhan to be gay. The writers got Agnes’ blessing, but the network wasn’t ready for a legacy character to be gay. The compromise was the introduction of Billy.

Other than the dull theme song, the Linda Gottleib years on OLTL were darn good.

You are so right. That theme song was a tremendous let down after the wonderful Tour of Llanview.
“Here’s what to do when you don’t find the rainbow’s end, this time……”

The Linda Gottlieb/Michael Malone/Josh Griffith years of OLTL (1991-1995?) were truly some of THE best years of soap storytelling. I was just remarking on Daytime Confidential site how engrossing, engaging, and energizing was the writing during that era, from the Billy Douglas coming out to priest Andrew Carpenter story to Viki’s growing attraction to Andrew’s father General Carpenter and the break-up of her marriage to Clint (who became a bigot at the time in response to Billy) to the introduction of Marty Saybrooke and her eventual gangrape at the hands of Todd Manning, who only later was revealed to be… Read more »

Not really a fan of the storyline but then I wasn’t a fan of either of Michael Malone’s stints as headwriter. I preferred the coming out stories of AMC’s Bianca, DOOL’s Will, ATWT’s Luke, and OLTL’s Oliver. The best social issue storylines in my opinion are: GL’s Roger/Holly marital rape trial; GH’s Stone dies from AIDS; ATWT’s Margo pulls the plug on Casey; GH’s Monica’s breast cancer; AMC’s Cindy contracts AIDS; OLTL’s Shane is bullied; AMC’s Mark’s drug intervention; AMC’s Michael Delaney reveals he is gay to his students and nearly loses his job; GL’s Holly learns her baby has… Read more »

Alan, all of those storylines you mentioned were executed with heart and soul. They were told with such love and sensitivity. They were not rushed, and they were topics that so many of us could relate to, even if they did not hit our homes, per say. They were real, adult topics that we could relate to because perhaps our friends, family, neighbors, dealt with these issues, and because they were the focus on news programs and in society. I miss the days when daytime television focused on real, human element storylines. Both AMC and GH did an astounding portrayal… Read more »

Alan and dmr, oh how I so agree with both of you and I so miss those days…That is what great soaps/daytime & night time drama’s are all about.

What a great memory you have Al! I do remember many of those stories and yes they were groudbreaking!

Nice! Ryan Phillippe went on to have a great career and it is great that he remembers his start. He is sooooo good looking! OLTL had many new young actors as well as provocative and educational storylines. GH is no where near as good, although they have double the cast. If I remember correctly, when Billy Douglas came out his father was terrible to him (RP did an amazing job in this role too). Marty Saybrooke then started a rumor about Andrew, the priest, because she had a crush on him, and that almost got Andrew thrown in jail. Queer… Read more »