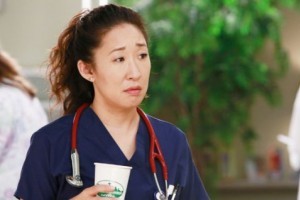 In an emotional interview with The Hollywood Reporter, Sandra Oh, one of the most popular actresses on the hit ABC series Grey’s Anatomy has announced she is departing the series after this season!

Having played Cristina Yang since the series premiered in 2005 , Oh has decided to leave the ABC’ top-rated drama at the completion of its upcoming 10th season.  Oh related, “Creatively, I really feel like I gave it my all, and I feel ready to let her go. It’s such an interesting thing to play a character for so long and to actually get the sense that she wants to be let go as well. (Cristina) wants to be let go, and I am ready to let her go. We have to start the process, story-wise, for the Grey’s writers to think of why she’s going to go.”

The actress told THR, she first began thinking about wrapping her Grey’s run in May 2012 when what she called the “original six” inked new two-year deals to take them through the 10th season of the series. “I’ve gone through a lot of therapy over this,” she says through tears. “I started thinking about it because I had to prepare myself. I gave myself two years to emotionally let go. At the end of last season, Shonda took me aside and said, ‘What are your thoughts?’ I said, ‘I’m ready.'”

Oh informed her co-stars about her upcoming exit during Tuesday’s table read for the show’s 200th episode and said the decision “doesn’t feel real” yet. “I seriously think I need that much support over processing it over this next year for me to be able to leave fully and leave in a way that I feel like Cristina deserves,” she says, noting that Rhimes has supported her every step of the way. “For the first time, at least for my character, you actually have an endpoint, which in series television you never or very rarely have.”

What do you think about Sandra’s decision to leave Grey’s Anatomy? Do you think all has been done with the character of Cristina Yang? How do you think the series will be without Oh?  Comment below!

RATINGS: All My Children and One Life to Live's Summer Fling On OWN!

Y&R Casting Younger Leading Role of Ally! What Are Your Casting Suggestions?

can not believe she is leaving that is so sad

Im sad as I love her character but I understand she wants to do other things, I wish her the best and lets hope they find someone as wonderful as Sandra Oh to play a different character.

I think Christina has kind of been painted into a corner – relationship wise anyway.
She loves Owen that much is clear,and he loves her,but he wants children – she doesn’t ,and I don’t think that is going to go away.
I hope they don’t kill her off – Mark and Lexie were enough.
I like to see her get a great opportunity at another hospital and leave that way.
But yes I’m still sad she is going.

Big loss for the show, but I don’t see it lasting much longer, especially without Sandra Oh.

This is terrible!!! I love Dr Yang!!! Good for her to move on if that’s how she feels but she will be missed

She’s irreplaceable, imo. I just can’t imagine Grey’s without her.

I love Sandra Oh, as Cristina Yang. She brings so much humor, even in the saddest scenes. She will be missed. I’ve watched Grey’s since the beginning. I love it and I hope they “go out” on top. Such a talented cast and writing team! Good luck, Sandra!

especially the part about… Sandra Oh’ sense of humor… and yes… she can wring out that much emotion, in the saddest scenes.

Dr. Yang… was… the biggest reason I tuned in to Grey’s.

her friendship with Dr. Meredith Grey was a pleasure. they played out every emotion relative to “sisters” – best friends – co-workers – adversarial – more competitive nature… and loved. Their bond is Grey’s.

I love Christina and Owen…. sizzling hot and ROMANTIC.

course, I have to prop my other love @Greys.

It’s too bad that golden globe winner oh is leaving grey’s. There’s such a lack of racial diversity on tv especially w/ Asian american representation. Char of oh is such an essential element of grey’s. Tolerant hollywood launched yet another leading lady who’s blonde and white when katherine heigl had a now fizzled movie career after grey’s. While sandra oh didn’t get same amount of movie roles as heigl bec oh doesn’t fit the mold of what hollywood wants from its leading lady and doesn;t conform to hollywood’s racist standards of beauty. There definitely should be more grey’s cast members… Read more »