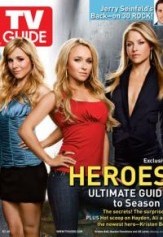 On-Air On-Soaps was very confused today, as I am sure many who were looking for the latest “exclusive”  soap news or soap  interviews offered by TV Guide Magazine on their online platform Tvguidemagazine.com were.

Monday, a new version was online, and in the Soaps area there was just a smattering of old soap related items from the past four or five months.  Then we learned via Airlock Alpha.com that there was a shift in the branding between TV Guide Magazine and TVGuide.com. The post originally came via  Advertising Age on May 24th  which states, “A new partnership between Open Gate Capital and Lionsgate will allow content from TV Guide the magazine return to TVGuide.com, the first time the two will do anything together since Macrovision sold the two sides as separate pieces in 2008. Although both companies will remain separate — as will the advertising and editorial departments — but content will be shared, as well as promotional opportunities between the website, the magazine and the TV Guide Network.”

The post went on to say, “Unfortunately for Open Gate Capital, having a separate website from the primary domain never worked for the magazine publisher. The site, TVGuideMagazine.com pulled in just 103,000 visitors in April compared to 7.8 million who stopped by TVGuide.com, according to Advertising Age. Many readers didn’t even know that the magazine and the website were two different entities, and many continued to visit TVGuide.com thinking they were visiting the magazine’s website.”

“We’re doing this so we can do more together than apart, particularly in the area of driving readership, viewership and visitors to the various platforms,” said Jack Kliger, a senior adviser to Open Gate Capital, to AdAge.   It’s not clear when the editorial share will take place. Neither site seemed to show any indication of cross-promotion or story sharing early Monday afternoon, and and neither site even picked up the story talking about the partnership from AdAge.”

However, thus far, it looks like the Soaps area is looking less and less populated by content, which could either signal another hit to the industry, or they are going to fix that area shortly.  Whatever, it surely proves that TVGuideMagazine.com does not pull in the numbers that major online soap sites do.

UPDATE: Evans Out! Jon Prescott to star in Indie Film!

"Sins Of The Father" GH Marathon set for Father's Day!

That’s not good for Daytime and for the Daytime press at all. TVG’s Michael Logan is one of the few soap journalists who seems to have integrity. He seems to write what he actually thinks regarding Daytime, despite his opinions being popular or unpopular. His analysis of Daytime is incisive enough for such a lightweight, frothy, silly medium. His critiques manage to strike the right tone regarding Daytime, and he never overanalyzes a superficial medium or gives it empty, sychophantic, delusional praises like the kinds found in Nelson branco’s tvgc columns. Logan was one of the first to actually critique… Read more »

When the kids are paying for programing, THEN I’ll be OK with another Disney Channel. Until then leave us our 1 Soap channel!!