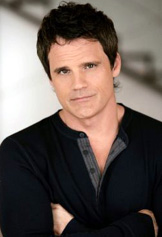 If anyone has watched As The World Turns for the last few weeks you have witnessed riveting daytime soap, due in part to Michael Park. As Jack Snyder, the everyman of Oakdale, who has shot and accidently killed his brother Brad in a shootout to protect his bro’s wife Katie and her newborn baby, Park has hit this one out of the ballpark …like five times over. As Jack has to try and deal with the fact that his bullet in the dark hit the wrong target and that it leaves behind a widower with no father to help raise her little baby, Michael Park has delved deep into the heart and soul of his alter-ego and has left our hero guilt-ridden and destroyed.

From the touching scenes after the fatal mistake, to his telling his son Parker and pushing his wife, Janet away, Park made us all realize why this long time veteran of ATWT is a daytime treasure.

And then there’s Carly….Maura West returned from her materity leave to a great new storyline which teases the viewers that this could be a chance for Jack and Carly to find their way back to each other. But as Michael told me in our new interview , he hopes it is not the same road they have taken before. And right now that road leads Carly and Jack all over the US in “The Never Surrender Tour” which has rolled into cities which include Philadelphia, Greenville, and soon Detroit. Along the way Jack and Carly have encountered blast from their pasts.

Next week’s Thanksgiving episode looks to be an eventful one with Jack and Carly getitng pretty close, somone going on a “binge” (and remember Carly is a recovering alcholic) and Janet deciding to bring back home her hubby for Turkey Day Rot-ro!

Michael is also set to co-star with former ATWT superstar Martha Byrne in the new web series, “Gotham” which premieres on November 23rd. I n it, he plays a very wealthy Richard Manning, a far cry from salt of the earth Jack Snyder.

Make sure to read the interview with Michael Park.

I truly enjoyed speaking with Michael, and as I told him, I would be happy to start putting together his Emmy reel for him.