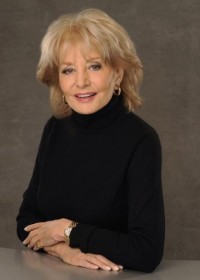 Television icon, Barbara Walters is saying goodbye to daytime television and her co-hosting duties on the ABC morning show The View this week, during a weeklong celebration.  Walters is also stepping away after five decades on television in what appears to be retirement.

The special weeklong event ABC: A Barbara Celebration kicks off live today on The View as the series honors the broadcast legend during her final days as co-host. You can follow the conversation all week long on Twitter #celebratebarbara.

Then, for the first time in television history, all 11 co-hosts of The View past and present, will share the same stage, live, Thursday May 15to celebrate the show’s creator Barbara Walters. Journalist Meredith Vieira, lawyer Star Jones, comedian Joy Behar, television personality Debbie Matenopoulos, journalist Lisa Ling, comedian Rosie O’Donnell, and talk show host Elisabeth Hasselbeck will join Sherri Shepherd, Jenny McCarthy, Whoopi Goldberg and Walters for this momentous, once in a lifetime television event.  Follow the conversation at #theviewreunion.

The week concludes on Friday May 16, a day New York City Mayor Bill de Blasio officially declared “Barbara Walters Day” with two monumental surprises, and Barbara’s final words on  The View. Additionally, Good Morning America Who Wants To Be A Millionaire, The Chew, General Hospital and World News with Diane Sawyer are among the shows scheduled to join the celebration honoring the broadcast legend all throughout the day.

Walters over the weekend kicked-off the celebration making an appearance on Saturday Night Live in a spoof of herself on the Weekend Update segment!  Watch it after the jump! Then, let us know will you check-out Barbara’s final goodbye on The View? How will GH pay homage to Barbara? No matter what your feelings are for the talk show, or Walters, she did pave the way for many talk show hosts and female television news anchors because of her storied career!

I wish Barbara Walters all the best in whatever she does next in her life.

Lord knows she has enough do-re-mi to do whatever the heck she wants.