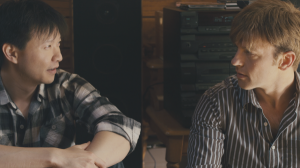 Those missing the talents of Trevor St John (Ex- Victor Jr/Todd OLTL) from their television screens, can soon find him again on the big screen!  On Friday November 4th St John’s latest film, In The Family is set to open in New York City at Quad Cinemas!

A bit about the movie’s story: In the town of Martin, Tennessee, Chip Hines, a precocious six year old, has only known life with his two dads, Cody (Trevor St. John) and Joey (Patrick Wang). And a good life it is. When Cody dies suddenly in a car accident, Joey and Chip struggle to find their footing again. Just as they begin to, Cody’s will reveals that he named his sister as Chip’s guardian. The years of Joey’s acceptance into the family unravel as Chip is taken away from him. In his now solitary home life, Joey searches for a solution. The law is not on his side, but friends are. Armed with their comfort and inspired by memories of Cody, Joey finds a path to peace with the family and closer to his son.

For information on In The Family visit the feature’s website here! For advance tickets to the theatre to see In The Family call 1- 777-Film-#356 or go directly to movietickets.com

Watch a trailer from the film below!

I HOPE IT WILL PLAY IN CANADA .

i hope it will play in canada

I hope it plays on the west coast as well, I’d love to see it.

Thank you so much for the trailer for “In The Family”. I love the actor Trevor St. John!

And, WOW! He also has such a great smile, always lights up my heart!

Now, I’m anxious for the movie to come to my city, I will definitely go to see it, just to watch Trevor!…
I’m sure it will be good with him in it!

Trevor playing a gay dad. Too bad his character dies early in the film. Gina Tognoni (Kelly of OLTL) has a brief scene.

I miss Trevor on OLTL so much it hurts. I will pay to watch OLTL on the internet if Trevor returns. I think the last OLTL broadcast on ABC should have Trevor return as Victor, to be continued elsewhere.

Seems like Trevor will have a small part in this as he’s the one that dies., The majority of the plot is what happens after Cody dies. How disappointing. I miss seeing him. He did a fabulous job on OLTL. i will see the movie to support Trevor’s career.