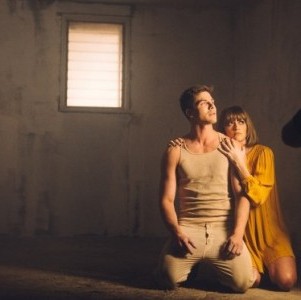 General Hospital’s Dillon Quartermaine, Robert Palmer Watkins, is heavily featured in the newest music video of acclaimed musical artist BeLL.  The video released on Friday for the first time which has  BeLL interpreting the REM classic, Losing My Religion.

Of special note: the editing for the video was completed when the horrific shootings at Orlando’s Pulse Nightclub became national news. Thus prompting BeLL to decide to donate a portion of the streaming proceeds for Losing My Religion to the National Center for Victims of Crime. “The song took on a much deeper meaning then. It’s heartbreaking when people distort & use religion to justify violence & malevolent hatred,” explained BeLL

BeLL’s career thus far has consisted of writing for other artists, including Natalie Imbruglia & The Script’s Danny O’Donoghue, & having songs in the media including a Volkswagen Super Bowl commercial & TV shows like Vampire Diaries & Pretty Little Liars. Known for her live shows consisting of all-female musicians, her cover of REM’s “Losing My Religion” was a collaborative effort between BeLL & AG, a female producer known for the recent haunting rendition of Ciara’s cover of “Paint it Black” featured in Billboard & Rolling Stone.

“Having an all-female crew for the music video was icing on the cake. It created a safe space for the actors to focus on the art & message behind the song and be completely raw rather than focusing on sex appeal,” BeLL recalls.

Robert Palmer Watkins is part of the dramatic and stark imaginary and performances used to convey the story in BeLL’s rendition of the REM favorite. Now,watch Robert in BeLL”s new music video after the jump.  Then let us know what you thought of it in the comment section below!

I like REM..
before my time, early 80’s, bit good music never dies (Beatles 1960’s etc etc)
I like the song Losing My Religion and I also liked the now performance..
Robert is quite good in all his vids ..

You know Suoo, you may comment on movies, music and TV shows without prefacing it with the ever redundant,”before my time” qualifier.
We get it, you want us to to know (or to think?) that you’re young.

Always loved that song; nice rendition (though I prefer REM’s) and ABSOLUTELY LOVE Robert Palmer. From his first appearance as Dillon to his hip hop music he is obviously a creative guy with a lot of interests and drive. Hot, sexy, talented. Brings just the right mood to this piece.

Just wanted to mention this song Is NOT about religion, rather it’s about unrequited love. Losing my religion means losing your temper or you’re at the end of your rope. In this song the guy is obsessing over the girl who’s apparently not into him anymore. So, while it’s great BeLL donated part of her proceeds to victims of crime based on religion..it ‘s only the word in the song…not its intent.

This is true, Rebecca. “Losing my religion” is based on an old saying which means one is at the end of one’s rope. You’re right when you say most folks misunderstood the title of the song. But Bell’s interpretation of this song is completely erroneous and demonstrates her complete misunderstanding of what the song is really about. REM, most notably, Michael Stipes, were inspired by the short story, “A Very Old Man with Enormous Wings” written by Gabriel Marquez Garcia. The short story falls under the literary genre of “magic realism.” The short story is about an old man who… Read more »

Hi Harry…actually according to Stipes the song was about obsessive, unrequited love as I said. The video they made to the song was inspired by a short film based on the story you mentioned by Marquez Garcia.

I liked this rendition as a stand alone piece…rather artistic, moody…but her interpretation is not what the song is about. Poetic license??? 🙂