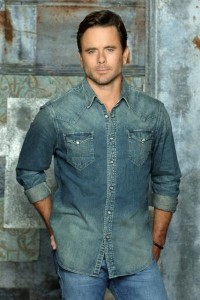 Last night, Nashville returned with all-new episodes with the premiere of their second season and a lot happened within the hour!  First, we learn that of course, Rayna (Connie Britton) and Deacon ( Charles Esten) survived the car crash, but Rayna ended up hooked up to a ventilator in the ICU in a coma, while Deacon wound up in a prison orange jumpsuit and thrown in the slammer facing involuntary manslaughter charges if Rayna dies.  Instead of fighting for his freedom,  Deacon feels he should remain in jail for breaking his sobriety and in his mind causing the accident that put Rayna hovering between life and death.

While she lay in her coma, Rayna flashbacks to her earlier relationship with Deacon! We see Rayna and Deacon in their younger days (still played by Connie Britton and Charles Esten) and how Rayna became pregnant with his child  … they were going to marry as he proposed to her and gave her a ring ….  how he fell off the wagon, and how she gave him back his ring!  The  doctors eventually bring Rayna out of her coma, and the fear is that she will not recognize her family! In the end, she does! So we don’t have to go through weeks of amnesia!

The “hankie moment” of the episode belonged to the wonderful performance of Charles Esten!  Deacon’s lawyer, found out it was Rayna who was driving the car the night of the crash, not him.  So she comes to his cell with happy news, that he’s being released because Rayna woke up and confirmed that he wasn’t driving.  Watching Deacon as played by Esten, overcome with joy and relief that his beloved Rayna is OK was the moment of the episode!

Elsewhere, Peggy (Kimberly Williams-Paisley) miscarried Teddy’s (Eric Close) baby and now lied about it to his face! And when Will (Chris Carmack) helps throw a bash to help Gunnar (Sam Palladio) get over Scarlett’s (Claire Bowen) rejection of his marriage proposal, a gay guy Will knows is at the party which doesn’t sit well with him and that is an understatement!  Alone with him, Will  grabs the guy in a scene reminiscent of Brokeback Mountain to us! And when the young man goes into kiss Will, the country and western singer hits him! Plus, we learn that Lamar (Powers Boothe) may have been the one to cause the car accident that killed Rayna’s mother!

Finally, Juliette (Hayden Panettiere) bonds with Maddie (Lennon Stella) and learns that Deacon could be Maddie’s father, not Teddy! What will she do with the info? And Gunnar and Scarlett sing together one more time, while Avery (Jonathan Jackson) looks on, but Avery seems to be on to Juliette’s shifty ways of marketing herself to the public!  Is it love?

What did you think of the season premiere of Nashville?  Did you like the flashbacks?  What was your favorite story point?  Let us know!

General Hospital's Ava and Morgan Have Sex! Carly, Kiki and Michael Stumble Upon Them!

DAYS Stars Speak Out On The Exit Of Chandler Massey & The Arrival Of Guy Wilson!

SCORE! Glad NASHVILLE has returned. Happy with how storylines are playing. Seems the plots in play will move Lamar and Peggy off the canvas in shorter order. I like the way the actual music business will be more central to the series. The politics and such shenanigans from last season seemed to slow the proceedings. I do like Rayna’s sister and hope she remains involved in story. The Will plot is exciting as it gives us a little something different.

I don’t think Peggy’s going anywhere. She lied to Teddy’s face about the baby…he still thinks she’s pregnant. Lamar? He’s not going anywhere either. Too central to the story…especially now with accusations that he had his wife killed. The music business more central? It was always central…it’s Nashville…and has always centered around Gunnar, Avery, Scarlett, Raina, Deacon. Juliette…their careers and their songs, their struggles, their rivalry. Do not like Raina’s sister at all. If there was one character that I would not miss it’d be her. As for the show, so glad to have it back. But I’m torn between… Read more »

Loved it!!, Loved Rayna and Deacon flashbacks. Those two are the only reason I watch the show, their chemistry is off the charts.

I liked the story!!!!
The singing is terrible and I can only hope for one song a show ..
(but I don’t see that happening so I’ll keep FF through the songs)

Right on! Good show, but really needs to do one song per show. They can show other singing if it’s cut short, to just a few bars, but please, please only waste my time with one full song. I FF the songs for the most part too.

Connie Britton, however, is perfection!

Everything went in a totally different direction than what I thought it would, but that’s okay & I can’t wait to see what happens next.

Love the show came after the first half of the 1 season was over and have missed the 1st 2 shows oof this season but going to watch and get caught up. Love Hayden and Jonathan.