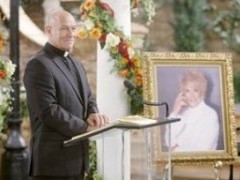 Y&R continues to honor the memory of the late daytime television icon Jeanne Cooper by airing a special two-part memorial service for her beloved character, Katherine Chancellor on Tuesday September 3rd and Wednesday September 4th on the CBS Television Network.  Cooper’s real-life son, actor Corbin Bernsen, returns to the show as Father Todd, who presides over the service.

In addition, as of today, CBS.com and Y&R have a new website posted for fans dedicated to the character of Katherine Chancellor and to have an additional experience with more features on Katherine’s passing.  Fans of the series will be able to see the postcards that Genoa City residents recently received to alert them of Katherine’s death as well as her obituary.  Also, the site will have the final, moving scene from today’s episode of Y&R and much more!

About the upcoming memorial service, Y&R executive producer Jill Farren Phelps related: “It’s time for the characters of Genoa City to say their goodbyes to Katherine, and while it’s heartbreaking for everyone involved, we hope our viewers will find it a fitting tribute to both an irreplaceable character and the amazing woman who portrayed her. Katherine had some final surprises up her sleeve that will be revealed at the service and we think everyone will come away with smiles on their faces.”

Talent Agents of Y&R's Christel Khalil Fire Back At Her For Lawsuit Allegations!

Its still all very sad…

This is ridiculous. Are people forgetting that Bill Bell and Jeanne Cooper never intended for Katherine to be revered? She was a miserable and destructive human being. The whole context of Y&R is how she destroyed Jill’s life and made her the angry, bitter woman she became, robbing her of her fairytale by killing Phillip in drunken spite and having his son with Jill declared a bastard in court. Not to mention her exploits in the 80s with ‘the puzzle’. The woman was a complete pariah but because she had money somehow that makes her admirable? Bill Bell describes her… Read more »

People change even characters.
Change is needed in life..
Leave the 80’s behind you live in the present 🙂 .

There is constant change in the what was planed, ideas, wants needs, all change..

Yes, I know Katherine originally was a depserate and sad bitter woman. And, oh, I LOVED the puzzle game she played with Jill in the 1980s. But because of the talents of Jeanne Copper and the stories Bill Bell and his team crafted for her through the years, Katherine softened some, found her personal strength,a nd ultimately happiness. This is what makes legacy characters fascinating to watch. Katherine never lost some of that craftiness but she eventually found redemption and peace. I wish we could see more of that in such longterm characters as Victor, Nikki, Jack, and others. To… Read more »

Good lord…that was the ORIGINAL premise of the character almost 40 years ago.

You are obviously missing the point, and that surprises me.

Even Jill over the years has softened towards Kay.

And the point is how many people both fictional and fans the actress and character touched.

And no one if forcing you to visit the website or even read anything about Kay.

Well-put, PatF! Katherine was obviously loved by the Genoa City community. The roll of Katherine was loved by millions of fans as she was the largest contributor of the show’s survival for 40 years. I know of no other character , or Actor / Actress that did what Jeanne Cooper / Katherine Chancellor has done. I will always miss her and Katherine Chancellor immensely. Losing her in real life as well as on the show has been a monumental loss to her fans. My sincere heartfelt sympathy goes to her family friends and fans everywhere. What a wonderful lady. May… Read more »

Wait! If that’s how you feel, that’s a testimonial to the acting of the actor!

*Cough, cough* Are you serious?! Really?! JFP is not, I repeat, NOT doing a great (an okay job in all honesty, but definitely not great) job of honoring Jeanne Cooper/Katherine Chancellor. If she was, she would have made sure that Jack, Traci, Billy, and Victoria were at the mansion the night that Murphy came home to deliver the news that Katherine had died. Katherine was a long time family friend to the Abbotts, but past executive producing and writing regimes have all forgotten that and have pulled Katherine away from the Abbotts and vice versa and made Katherine somewhat of… Read more »

JFP is NOT one of my favorites but the tribute is beautiful! Yes I do agree about the Abbotts not being included friday nor Monday’s episode but it will be when the funeral gets here!

I would have liked to see the Abbotts present at the reveal of this plot point, too, at least, Jack. But I am guessing we shall see them at the memorial or involved as the fallout is presented.

This is a difficult time, especially since it was not so long ago everyone was gathered to bury Katherine when it was really Marge who had died!

KUDOS to the producers and to CBS. Great way to pay tribute and to keep the fans engaged. The tissues better be close when Nikki and Jill have their on camera goodbyes. No one can make me cry like Melody Thomas Scott!!

I have to say, I was really upset, initially with CBS .. on the day she passed away there was an approximate 20 second segment on the evening news about her passing.. Since that time , I think they have done much better about honoring her, as well they should. I think the storyline with Murphy delivering the news about Katherine’s passing seemed very odd. A Husband, typically would be much more broken up about her passing than he seemed to be. Jill remains typical of her character to think she now has inherited the Chancellor Fortune and that shes… Read more »

BTW, Jess Walton has been absolutely spectacular in her scenes these last few days; she always brings it!!!

She has , indeed. I think in real life all of the people Jeanne worked with loved her immensely.

I’m not a Y&R viewer but wanted to watch the current episodes in honor of my mother who followed the show for 40 + years until her passing last summer… but Time Warner has blocked every way to get to see them. Hope this damn standoff is fixed by September 3 & 4!!

I think that Corbin has done a phenomenal job with all his writings about his mother. Katherine was such a great actor aka Jeanne Cooper. I have watched her for years going on 40. I so loved her acting and as a person I can see she was a awesome mother. Her children so admire her. I feel so saddened for Corbin most of all as I can relate. I have a son that adores me in the same way and words can not explain how that makes a mother feel. She is watching you from Heaven Corbin and she… Read more »

Jeanne Cooper remains my all time favorite actress. Not Meryl Streep, not anybody– The character of Katherine Chancellor was captivating from the moment I first saw Y&R, 57 years ago! — Never saw a “soap” before that. (never home during the day before that; just had my first child…)

Rest in Peace, “Katherine”, & thanks.

Thank you but Y&R will never be the same.