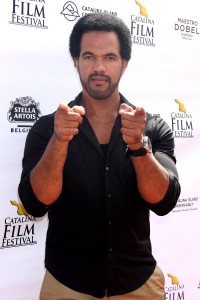 Daytime Emmy winner Kristoff St. John of The Young and the Restless has been bearing the heart and soul of the conflicted mind of Neil Winters during the “Flirt with Disaster” February Sweeps storyline on the number one daytime drama.  As viewers know, just before the private jet crashed carrying Neil’s loved ones, Neil revealed he knew about his wife Hilary (Mishael Morgan) and his son Devon’s (Bryton James)  affair, which has provided some solid material for the actor to sink his teeth into.

But the drama at Y&R, is nothing like his personal drama that was reported today via Radar Online.  St. John, who three months ago lost his beloved son Julian to an apparent suicide, is filing a wrongful death suit against the mental hospital Julian was staying at.  Reportedly, Kristoff’s ex-wife Mia and the soap star have retained renowned attorney, Mark Geragos for the case.

While the coroners office came to the conclusion that Julian died via suicide with a bag over his head in the bathroom of La Casa Hospital, in Long Beach, California, new evidence is pointing to it possibly being a homicide.  A source told Radar Online the family believes Julian was murdered.

Radar’s report goes on to say via their source that Julian called his mother hours before he was found dead, telling her he believed another patient at the hospital was going to kill him.  The  source also told the outlet that Julian was very scared.  The outlets details that Kristoff and Mia want to see security video from inside the mental facility, which they believe supports their homicide theory.  While they’ll have to get a court order to view the video, a source close to the investigation confirmed it shows Julian walking back to his room after hanging up the pay phone and other people are “going in and out of his room.”  The family also suspects the video will confirm that hospital staff did not check on Julian for hours despite his being placed on a ‘precautionary’ suicide watch that required someone to look in on him every 15 minutes.   Julian St. John had suffered with mental illness for many,many years prior to his death.

What do you think about the difficult heartbreak this must be for Kristoff and Mia to have to file suit? Are you stunned by the possibility that Julian could have been murdered?  Share your thoughts, and send your well-wishes to Kristoff as he continues to grapple with this unfortunate new chapter in the death of his son.

Y&R's Disaster Storylines: The Underground Collapse, The Plane Crash, The Cabin, The Fire! What Did You Think About The Events That Transpired?

DAYS OF OUR LIVES: Marlena Gets An Earful! Sonny Lowers The Boom On Will!

I can see how they might want to believe it was murder versus suicide. Whichever, it is very painful and sad for anyone to go through. I do agree that Julian should have been better supervised/watched. Hopefully the truth, whatever it is, will come out if it hasn’t already.

The loss of this talented, beloved, beautiful soul is tragic. I hope they find the answers they are seeking and some semblance of peace.

For the Kristoff’s not to have a definitive conclusion to their beloved son, Julian’s death, must be more painful than anyone can imagine To know he was in a facility where Julian’s security and safety was of primary importance to all the family AND Julian too, how this death occurred MUST be investigated. This seems the only way that the truth will come out. It will be a definitive way for the facility to be made responsible to the law and the courts. Any sort of ‘cover up’ for negligence or the queried homicide will be examined thoroughly. As it… Read more »

I think it’s the right thing to do because it is forcing the medical facility to be held accountable. Whether it was suicide or homicide, the facility was responsible for this young man’s well being and they failed him miserably.
I bristle when fast food arm chair psychologists use the term “closure” in these situations because such a thing is not possible in a case like this,
However, knowing exactly what happened to his son might give Kristoff some semblance of vindication.

Sadly, there won’t be a vendetta to be had. It will not serve the Kristoffs any good. The only benefit derived from this suit would be that it does not happen to anyone else…..as a lesson. Perhaps it will be enough to live a ‘normal’ life again, but I doubt it. It would be a temporary fix. There is nothing in this world that will alleviate the pain of losing a child. I admire the gesture, but going to court for vindication or for appeasing one’s anger or hurt is futile. Peace will come from within, not by any outside… Read more »

Either way it sounds like there is a case to be made–if the young man was being supervised properly neither a murder or a suicide should have been able to happen. When people trust institutions with the care of their loved ones, there is the expectation the institution will do everything possible to see their loved ones receive the care and attention they require. I know a lawsuit will not undo the tragedy but I hope the family get the answers they need and perhaps this case will lead to reforms that will prevent another tragedy like this from happening… Read more »

So very sad to hear & read this. Children are supposed to bury their parents not the other way around. My sympathy to them & may God give them strength to get through this horrific ordeal. RIP Julian.
Hope this case will bring changes to help patients in Institutions going forward.

I feel so sorry for this wonderful man but I always felt that when someone dies that we love & are very close too we want to lay blame. There may very well be blame to go around but to lay a wrongful death suit is not going to bring Julian back. Only time will heal that pain & loss. I pray you & your family find peace.