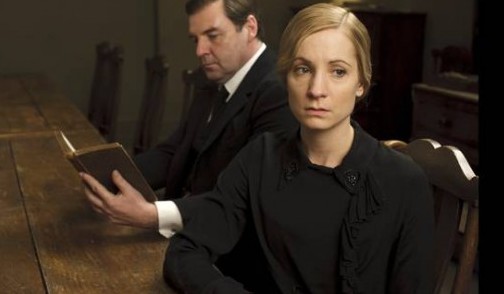 If you have not watched last night’s episode of Downton Abbey,  you do not want to read any further, because we detail a harrowing plot point that was controversial in the U.K when  season four played out a few months back.

In the episode, the beloved downstairs head housemaid Anna, played brilliantly by Joanne Froggatt, suffers a terrible fate! And fans of the series had already seen her suffer by watching her husband, Bates (Brendan Coyle),  be jailed for a crime he did not commit thanks to his evil ex-wife throughout all of season three!

In the season four second episode, the Crawleys throw a lavish party which is the centerpiece for much of the drama on the episode, and during it we are introduced to Lord Gillingham (Tom Cullen), who is the first potential new suitor for Lady Mary (Michelle Dockery), since Matthew’s death!

Lord Gillingham has with him his valet/butler named Mr. Green.  Anna seems to be the flirtation or obsession of the guy, and when Anna excuses herself to go downstairs to take something for her headache, the butler follows her and within seconds he is attacking her, grabbing her by the hair, taking her to the backroom, and raping her!  This all plays out while Melba, the opera singer, is performing at the party! Thus, no one can hear her screams, and she is downstairs!

Later, when Mrs. Hughes (Phyllis Logan) discovers Anna, the victim is now terrified that if she told Bates the truth he might try to kill the man and he would be sent back to jail, so she convinces  Mrs. Hughes to keep quiet. And sadly at the end of the episode, she can’t even let Bates touch her!

TV Guide spoke with Downton EP Gareth Neame about the controversial plot twist that outraged so many viewers when it first aired in England!  Neame related, “Like the death of the Matthew Crawley character, audiences are very protective of these characters and view them as an extension of their own families. The big thing about our show is there being big twists and surprises, and this (incident) is perpetrated on possibly the most beloved character of all: the one with the warmest heart.”

As far as why this was thrown into the story for Anna, Neame stood firm that:  “It is not us just being flashy and trying to get attention  It is definitely something that was an issue at the time and women did not have any of the recourse that they would have now. Anna is in a terrible predicament that gives us a great undercurrent that runs through our fourth season.”

So what did you think of the shocking turn of events for Anna on last night’s Downton Abbey?  Weigh-in!

REPORT Alleges Fired Y&R Star Michael Muhney Has Been Ordered By Sony and CBS To Not Discuss Anything About The Show Or The Cast!

Great show but sad that such a loving and caring person in the series has not be given a happy moment with Mr. Bates (husband). I hope she is not going to be pregnant with the sleeze bags child…Love Anna and Mr. Bates…

I agree with you, Sal.

I felt something was going to happen the moment they were together…but not this…im a first time watcher and i havent learned all their names but im hooked!!!

Go to your local PBS website….they usually have a good section on the “Abbey”….if I recall they even had a character chart in the first few seasons. I think they save all the info from past episodes, so you may be able to get up to speed that way. Also, believe it or not, Wikipedia had a very detailed page on all the plotlines, roles and actors since the start of the series. I used that as a resource in the beginning to figure out where so many of the familiar faces had appeared before “Downton.” I know that website… Read more »

I was angry and want the perpetrator to pay for his crime against Anna!

I was disturbed by this turn of events. I know DA is somewhat of a soap but if they do a who’s baby is it story I really feel it is something outside the normal writing that has been done in the past.

Poor Anna seems to be this season’s put upon female…first the lie about the burnt clothing, now this…

This season’s put upon female??? Have you watched the prior seasons? The character of Anna has been put through the wringer throughout the entire series with the rape being the ultimate misdeed on her. Like most well written serials, Downton Abbey definitely has the “nice girl who is always facing troubles” and that clearly is Anna. It reminds me of daytime characters from the past….Jo on “Search for Tomorrow”; Kim on “As the World Turns”; and, until the past few years, Sharon on “Young & Restless” are just a few examples. The show is very well written and I like… Read more »

As a long-time soap fan, I find most of ‘Downton Abbey’ to be stale and recycled. The timing of the storylines seems to always avoid real drama in favor of shock value and some of the plotting is just downright clunky. But that’s just my perception of it.

If you aren’t madly in love with the show, then don’t watch it. For lowly people like us, who love fairy tales. Let it be. Some of it is contrived. The money that was inherited was a little over the top. But fairy tale love affairs are like that. England is a romantic well mannered fairy tale to us who live across the pond anyway. Let us have our fantasy, let us enjoy the fairy tale. We were jipped out of the real deal with Diana and Charles so let us have this fantasy.

Who’s preventing you from enjoying it? I can dislike and you can still enjoy it.

Of course I am sorry that Anna is suffering but these scenes were well written and played – terrifying and not the least bit graphic for which I was thankful.

I saw “Downton” last year when it aired on ITV…Season 4 is amazing, from the Anna and Bates story, to many, many others, that have yet to air in the US….

My husband doesn’t watch Daytime Soaps and even he predicts Anna will end up being pregnant. Please JF, say it ain’t so!’

Pity that Ethel wasn’t still hanging about the Abbey….she certainly could have shown Green a good time, and it might have spared the lovely Anna this latest tribulation.

I was shocked, knowing that back then not much would be done about something like that. Raping a woman that has no position or money meant nothing. However my feelings today would say call the police and have him arrested. That’s not really an option. Plus manners back then would prohibit the Crawleys from saying too much. Her husband on the other hand would want revenge. It looks like he committed the perfect crime and in reality I think he did the world a favour if he did knock the man in front of the train. My opinion is say… Read more »