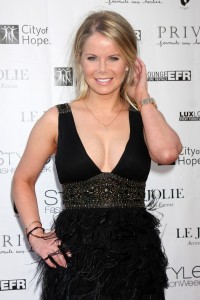 Queens of Drama cast member, and the former star of One Life to Live and Guiding Light, Crystal Hunt was sentenced in Los Angeles court on Friday after pleading “no contest” to assaulting a woman at a West Hollywood bar back in December of 2013.

The incident which took place on December 13th of last year was reported that Hunt threw a drinking glass at a woman after an altercation broke out at a bar.  The victim suffered injuries to her face as a result of the attack, authorities had said.  Hunt plead no contest to felony assault by means likely to produce great bodily injury.

Hunt is known for her roles as Lizzie Spaulding on Guiding Light and the conniving Stacey Morasco on One Life to Live. T he question is: will the upcoming Queens of Drama reality series on POP (formerly TVGN) feature sentencing day in one of its episode? It would certainly be dramatic!

What do you think of the sentencing …. Crystal getting three years probation and having to work for Caltrans?  Comment below!

B&B's Katherine Kelly Lang Dances The Salsa On Dancing With The Stars Italy, Then Gets Onslaught Of Rude Comments From Judges!

SUNDAY: The REVENGE Moment You've Been Waiting For! What Will Happen When Emily Finally Sees David Clarke Is Alive?

Talk about a Morasco Fiasco!

I think she got off with a light sentence. I guess something like the character she played. Certainly not classy.

CeeCee…oh, I agree. Check this out…

1. If I remember correctly, Crystal Hunt’s OLTL character of Stacy was VERY DISLIKED by L-O-T-S of soap fans. And, yes…I couldn’t stand Stacy, either!!!!!
2. After Crystal left her GL role of Lizzie, her replacement Marcy Rylan (UNLIKE Crystal) got along VERY AWESOMELY with the entire GL cast and crew. And…Marcy fit in PERFECTLY…behind the scenes and all. Yep.
3. Finally, from what I hear, Marcy Rylan is a REALLY COOL AND DOWN-TO-EARTH CHICK (unlike that SPOILED BRAT Crystal Hunt!!!!!).

and yet they’re still putting her in the show. smart. not.

Huh??? Are you kidding me??? Three years probation…R-E-A-L-L-Y??? This makes me wonder what in the H-E-L-L has happened to the judicial system in our country?!?!? Bottom Line Here: The 3-year probation period will teach Crystal Hunt NOTHING!!!!! She’ll get into MORE TROUBLE soon enough. GUARANTEED!!!!!

Her name should be Hystal LOL

So does this mean I will see her on the highways in california picking up trash?

LOL good one. She is a train wreck and a spoiled brat.

She should count her privileged stars.

I guess I’m the only one who liked her on OLTL. Stacy was so bad. I thought the Mirasco Fiasco was a pretty good storyline.

Good one, Jay! Wish I said that…

MBmom… I liked her too….or rather loved to hate her. She’s talented. She’s a brat but she’s talented. Wouldn’t it be nice if she changed her ways and became a model citizen (unlike her Sydney White co-star Amanda Bynes)

I thought that she did a decent job on OLTL. Stacy wasn’t supposed to be a likable character. She was there to cause trouble and she certainly did.
The problems that I had with Stacy were not the actress’s fault. Her motivation never made a lot of sense. And, until the end, she was never properly integrated into the rest of the program.

She was in the wrong place at the wrong time – typical of someone that is troubled within.She doesn’t need your rotten eggs – but your prayers. I love her and always will. Where are her fans in this forum – only read one.The rest self righteous egg throwers.

So, what would you want to ask Ellen Parker about her exit from the show as Maureen? What do you recall about the storyline? Comment below.
Continue Reading