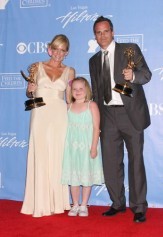 It was a big night Sunday, for As the World Turns Carly and Jack, when Maura West and Michael Park took home their Emmys for Lead Actress and Lead Actor in a Drama Series.  On-Air On-Soaps was backstage to get their thoughts on their emotional and bittersweet victories since ATWT is going off the air come September after its long run.   You can view our photo gallery from the press room with the winners and coverage of all the parties with the stars in Sin City, Las Vegas in our Emmy hub microsite.

On-Air On-Soaps asked Park where he would put his trophy and he responded by saying, “I might give it to my grandmother who has watched the show for 52 years. I can’t believe how emotional I am.  I think seeing Maura West (Carly, ATWT) my fake wife, and my real wife in the audience, kind of took me over.   I shouldn’t have looked over there.”  Park then addressed the sad part of his Emmy week, that prior to his trip to Vegas the star ended his run on As the World Turns along with 60 other cast and crew members,    “May you never have to do that.  I hate to say something so cliché but it has been a roller coaster, it truly has.  It’s not bittersweet, it’s just bitter.  There are 60 people who work so hard at what they do, and it’s the last time I saw them for all I know. I know I might see some of them on other shows, but it’s really hard. Those people work so hard at what we do, and knowing for six months we were not going to have a job anymore made it that much harder every day, to come in with smiles on our faces.  But we did, and the writing was lacking because people were finding a new job, or we were trying to find ways of wrapping up, and the hopes that we could sell the show someplace else, and so that was going on in the back of our minds.  You never knew whether to grasp on to that.  So, knowing sooner or later the inevitable is going to happen, and to say goodbye, it’s tough, and it’s killing you inside. And this (Emmy)… never in my wildest dreams did I think I was this good, and I thank you.”

Maura West who brought her daugther, Katherine up on stage with her and backstage had this to say about her acceptance speech. and leaving out her hubby, Scott DeFreitas (Ex-Andy, ATWT)! “I did not say my husband’s name, and everybody knows how I feel about him. I feel like crap for not thanking him.  I did say that Michael Park winning was enough for me, and I genuinely meant that. It would have been a great night indeed, if my hands were empty and his were golden. Then, I thanked Chris Goutman, and the producers of the show, and my daughter came up on stage with me. But truly, to win this Emmy and have it happen in front of one of my children is overwhelming.”

Daytime Emmy Telecast up in ratings from previous two years in households!

when maura west didn’t thank her hubby, i immediately thought of jennifer aniston and hillary swank not thanking their hubbies. but it was especially bad for west since she called her daughter on stage. hello? you called your kid on stage but you forgot to thank your hubby. yikes! then she looked like she ignored him when she was walking to the stage. it would be a logistical nightmare if they got a divorce since they are a baby making facility.