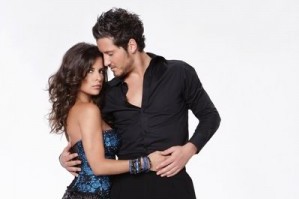 It was fantastic night of dancing for General Hospital favorite and former Dancing with the Stars season one champ, Kelly Monaco (Sam)!

On tonight’s Dancing with the Stars All-Stars competition, Kelly and her dance partner, Val Chmerkovskiy wowed the audience and the judges with their sizzling Paso Doble!   For tonight’s episode the celebrities got to be the creative director’s of their own routine, and the routine had to be chosen from an iconic dance from a previous season of Dancing with the Stars.

For Kelly and Val’s Paso Doble performance, the judges comments ranged from: “I’m tingling with pleasure,” from Bruno, to Carrie Ann Inaba stating,  “You’re the couple to watch.”   And Len Goodman topped it off with a comment to Kelly of, “Where did that come from?”   Soap fans will have noticed also that Kelly’s on-screen mom, Nancy Lee Grahn (Alexis, GH) was cheering Kelly on from the audience and was all smiles after Kelly’s performance.

After the judges scores, and a rousing night of competition that saw some of the best dances ever in the history of DWTS, Kelly and Val scored a 27 landing them at the top of the leaderboard tied with Melissa Rycroft and her dance partner Tony Dovolani!

Bristol Palin, who last week was saved from the bottom three, had a meltdown earlier in the week during rehearsals with her partner, Mark Ballas, which was documented and shown during the broadcast.  Palin and Ballas ended up once again with the lowest score from the judges this week with a 22.5.   Many thought that the best performance of the night belonged to Olympic Champion, Shawn Johnson, and her partner, Derek Hough!  The duo performed a quickstep with flips, jumps, and that’s putting it mildly.  While the couple did break the rules, they did not suffer to much in the scoring as they are still in the number two position in the leaderboard.  Bruno exclaimed, “It’s one of the best dances, if not the best in all 15 seasons.”

After the jump, watch Kelly and Val’s Paso Doble, then let us know what you thought of their performance? And, who do you think will go home tomorrow night in the double elimination?  Let us know!

Stephanie's Cancer Is Back On The Bold and the Beautiful – Watch The Promo!

loved, loved, loved it! almost as excited by it as Nancy Grahn! lol. Her gorgeous face fit the dance perfectly.

If Kelly is eliminated tonight and Palin winds up staying…..I think…. I…. will have a meltdown.

Val and Kelly certainly earned that shared top spot last night. She was so very poised and did a stunning job with Val. They do make a great team. If you feel the same, please vote to keep them in the competition. Sometimes with this show, when someone does so well, people tend to not vote for them thinking that they will be fine, but as many of us know, that is not always the case, so vote for Kelly and Val if you enjoyed their top-ranked performance!!!! Kudos to Kelly and Val, great job, and whether it is real… Read more »

I thought the performance that Kelly Monaco did with Val was ab-solutely Sam-sational.. it well paid off after taking off from GH to create this truly grand Paso Doble Dance. Kelly, my girl you go now.. bravo bravo Sam..

No Kelly hasn’t taken off GH. She said she is working while rehearsal and would have just one week of vacation. That weeks vacation maybe ths week. I heard her say she would be on vacation for a week, last week. Anyway, that was about the BEST Paso Dobla dance I have ever seen on the show. I love to see Kelly made up, accentating her Italian heritaage.

Bravo, Ole’ they were great!

I was SO proud of Kelly last night! She danced like a pro and totally showed the audience (and her competiters!) that she deserves her spot in this all-star season! Her and Val’s chemistry was on fire, she played the role in the paso perfectly, her footwork and lines were incredible- I was so impressed! Loved every second and can’t wait to see her dance again next week!

Kelly was FANTASTIC. My honey saw her dance , along with Melissa’s, Shawn’s and Derryck”s, Emitts, and Bristols….. and he said Kelly’s was BEST. NOW, as for ABCD-dumb network. SHAME SHAME SHAME on the network for inviting Bristol Palin on for the All-Star Reunion. Why? Here you have former OUTSTANDING winner’s being VOTED off, because of the strong following as the Tea-Party. I thought this was a Dance, yes Dance competition, NOT A POPULARITY competiton. ABC knew this was an All-Star cast and many of them were 1st and 2nd place CHAMPIONS. Therefore, they take this competiton seriously; they have… Read more »

Did you see Bristol’s face? I know, I would have ELIMINATED myself. I would not have allowed ABC to use…….. me as their guinny pig. Bristol knows what happened last time, so she had an expectation of what WOULD happen THIS time. Bristol was ALSO, feeling the HEAT and is WHY she had the MELT DOWN in rehearsal with Mark. She knew she wasn’t as good and should be eliminated. The order to leave should have been as follows: Pam, Bristol, Kristie, and Joey for starter’s. They need to change the over-all final judging to be the decision of the… Read more »

Wednesday morning, Oct 10th. 8:22 am. I just saw Drew and Elio on Good Morning America. I am PROUD of Drew. He brought it up and brought it up so eloquently, rather than just saying he was ” ok ” with being voted off so soon. He said, he’s a fan of the show, and he ” wants the show to GET THIS MONKEY OFF IT’S BACK about people being on the show that shouldn’t be, and continue on to being a crediable show “. How frank was he and eloquent, OPPOSE to trying to make us believe he is… Read more »