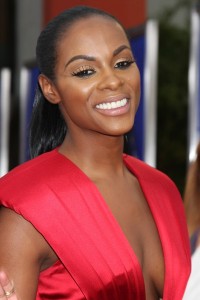 Former One Life to Live star, Tika Sumpter (Ex-Layla Williamson) is getting to hang out with Oprah Winfrey herself these days as Tyler Perry’s hit soap opera on OWN, The Haves and the Have Nots starring Sumpter is taking off!  However, in this new interview with TV Guide Magazine’s Michael Logan, Sumpter reveals she wishes the writers in Llanview had written Layla with more of a edge, since her “Have Nots” character is quite the opposite of Ms. Williamson!

Fast forward to today, Tika plays gold-digger Candace Young, a hooker who is sleeping with and blackmailing Judge Jim Cryer (John Schneider) on the series that airs Tuesday nights at 9/8C.   TVG asks Sumpter about her delicious new role, how it came about, if she thinks the series is a “soap” and the negative pushback she has received for this portrayal of an African-American woman.  Here are a few interesting excerpts below!

Tika on how African-American women are rarely portrayed as a badass, which is stirring up controversy:  “It’s true! I think most people write from what they see in their own world, which is maybe why we so often see an African-American woman as the best friend, or the one you bring in when you need some sass. It’s like we’re put in a box. When I was on One Life to Live I always wanted to delve into my character, Layla, to find out why she was the black sheep of the family. I so wanted to have some edge. I have no idea why there was a reluctance to do that or why we so rarely see it. I guess you’d have to ask the writers.”

Tika on how she was discovered by Oprah and Tyler Perry for the role of Candace:  “I created my own audition reel, with my sister reading the other lines, and sent it off. Then one day I got a text from him saying, ‘I just saw your tape. Holy cow! I’m sending it to Oprah right now! Soon after that there was a text from Oprah saying, ‘I can’t see anybody else in this part! And so they offered me the role. I can’t tell you how it feels to have these powerful moguls believing in me. It’s just crazy!”

Have you checked out Tika on The Haves and Have Nots?  Did you like the character of Layla Williamson on One Life to Live?  Comment below!

Kirsten Storms Comeback From "Zenon: Girl Of The 21st Century" To General Hospital!

I am a fan of The Haves and the Have Knots. This show is awesome and Tika Sumpter is doing a phenomenal job of portraying her part. She leaves me at a loss for words and raring to see what she will do on the next episode.

I dont get OWN so i cant watch…

With this show and repeats of the two reboot soaps to air here, seems like OWN is fast becoming the new SoapNet!

I am a very big fan of this show. The cancer scene in episode 4 was the best ever !

Loved her as Layla Williamson on OLTL – very talented lady! Have not seen her new show on OWN or have I ever watched the OWN network, but will have to tune in.