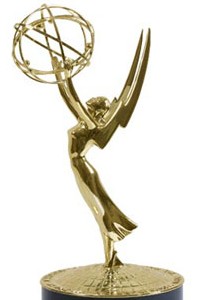 The first list of presenters had been released by HLN, the host network of the annual Daytime Emmy Awards show.

The Young and the Restless’ nominated young stars Max Ehrich, Bryton James, and Hunter King are  tapped to present during the telecast, with Corbin Bernsen and Jess Walton confirmed to introduce the “in memoriam” tribute, which will include the legendary Jeanne Cooper.

In addition, this year’s presenters will include some of the biggest names in television, past, present and future including:  Steve Harvey, Betty White, Wayne Brady, Alex Trebek, Todd Newton and the newest additions to daytime TV, Bethenny Frankel and Kris Jenner.

More information will be announced in the coming weeks including hosts, additional presenters and show content.

2013 landmarks the the 40th anniversary of the Daytime Emmy Awards, representing four decades of achievement within the Daytime Community.  The theme of past, present and future will be a defining constant throughout this year’s monumental telecast honoring this special anniversary.

In it’s 40th year the Daytime Emmys will be presented live  from The Beverly Hilton hotel in Los Angeles on Sunday, June 16, 8-10 p.m., ET/PT!

So what do you think of the line-up this far?

Watch The Daytime Emmy Outstanding Lead Actor in a Drama Series Nominated Performances! – Who Should Win?

Could do without Frankel and Jenner.

I can’t help but feel bitter knowing that the Daytime Emmys completely ignored paying tribute to the greatest actress who has ever graced the soap opera genre – Beverlee McKinsey.

Why does Betty White have to be everywhere? She’s like the Ryan Seacrest of TV these days.. ANNOYING!

Bite your tongue!!! Betty White may be all over the place, I give you that. But she isn’t 1/10 as annoying as that in-the-closet, overtanned nobody.

haha!! Okay, okay… the lady needs to follow Barbara Walters and hang it up already though!

Why should she “hang it up” when it is something she loves doing and has done for years? Just because someone is older in age does not mean they should stop living. Look at legends like Jeanne Cooper, 84-years-old and she worked until she could no longer physically go on. I think it is very ignorant to be agist and insist elderly men and women should retire from something they love and are good at just because of their age.

Well, Jeanne Cooper was on one show and Betty White is all over the place. It’s not ignorant & I don’t appreciate being called names on here since I didn’t attack YOU personally, now did I? It’s called too much of one person splashed all over the place and it is annoying! Kind of like a movie star that makes 20 movies a year — that gets old too.. OR the Kardashians all over the frigging place. Too much of anyone is annoying. It’s my opinion & I’m entitled to it and sticking to IT!

How is she “all over the place”? She has one show that she is on and she is presenting at the Emmys, which isn’t a stretch since she was on Bold & the Beautiful. I didn’t call YOU ignorant, I said it is ignorant to be ageist, which you appear to be from your comments. I understand that is your opinion and that is very unfortunate and I feel badly for you.

Keep up the good work, Betty White! You are an inspiration to a lot of people…just not ALL people! (smile) Sounds like this detractor is a good candidate to get spoofed on “Off Their Rockers”! LOL!!!!!!!!!

I think it sounds great thus far, and I am thrilled that HLN will broadcast it. Clearly on this channel, it will be based more on content than fluff advertisements as in recent years past. I look forward to tuning in!!!

I guess I’m old school, but I am more interested in hearing what soap opera stars are going to be presenting. If they need these other people to help bring in ratings and keep it on the air, I can live with it, but none of those stars outshine my daytime TV stars.

Me too Rodd….it’s sad & shameful when talk shows are built around the daytime Emmys because there are more of those damn talk shows now then soaps….depressing…

The only part that I want to see is the Jeanne Cooper tribute so I hope someone puts it on YouTube because I will not watch the Daytime Emmys anymore. The show hasn’t been any good since they stopped showing clips of the soap actor nominees. I don’t watch any game or daytime talk shows so I’m not interested in the rest of it.