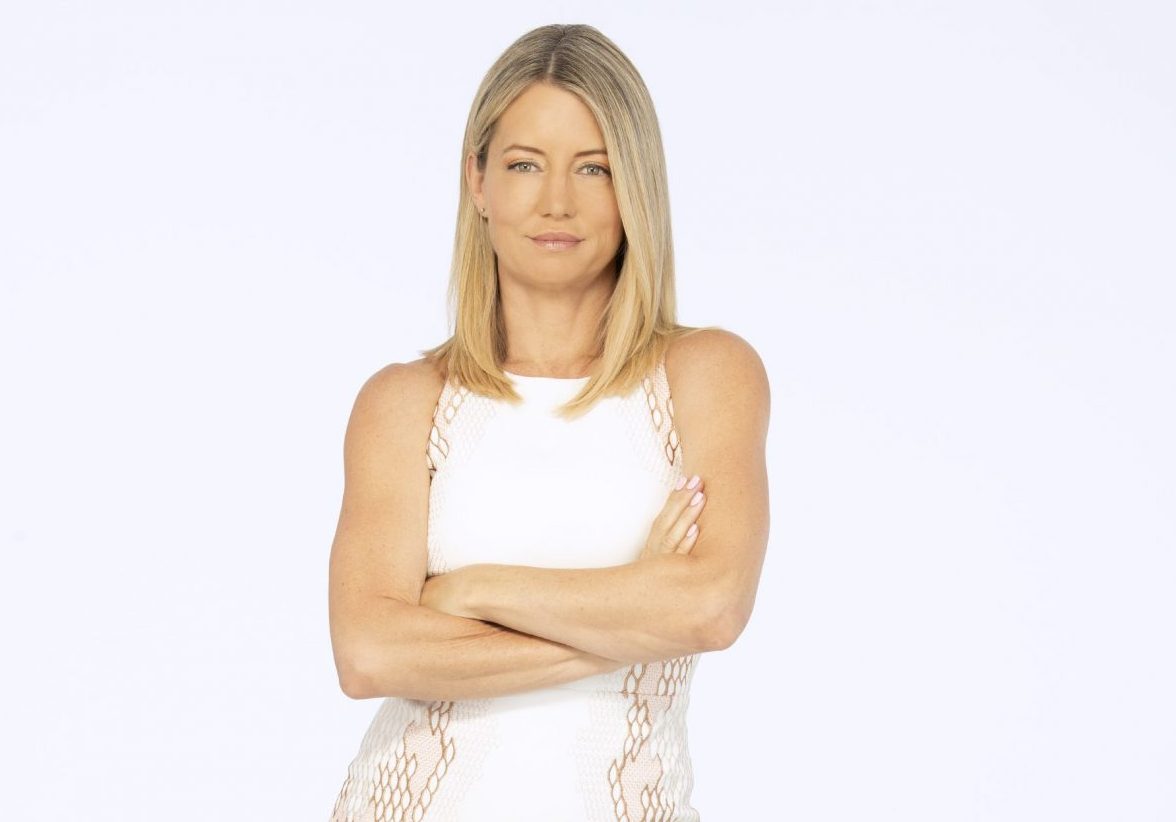 Friday’s episode of General Hospital combined with Tuesday’s episode of the ABC daytime drama series, saw Daytime Emmy-winner, Cynthia Watros, run through the gamut of emotions in her portrayal of the duped Nina Reeves on her wedding day and the aftermath.

Watros, who made Annie Dutton of Springfield and Guiding Light one of the most memorable soap roles of all-time, showed GH viewers why she is just THAT good!  We have always said that Cynthia can play: drama, romance, torture, cray-cray, heartbreak all rolled-into-one; especially when given the material. 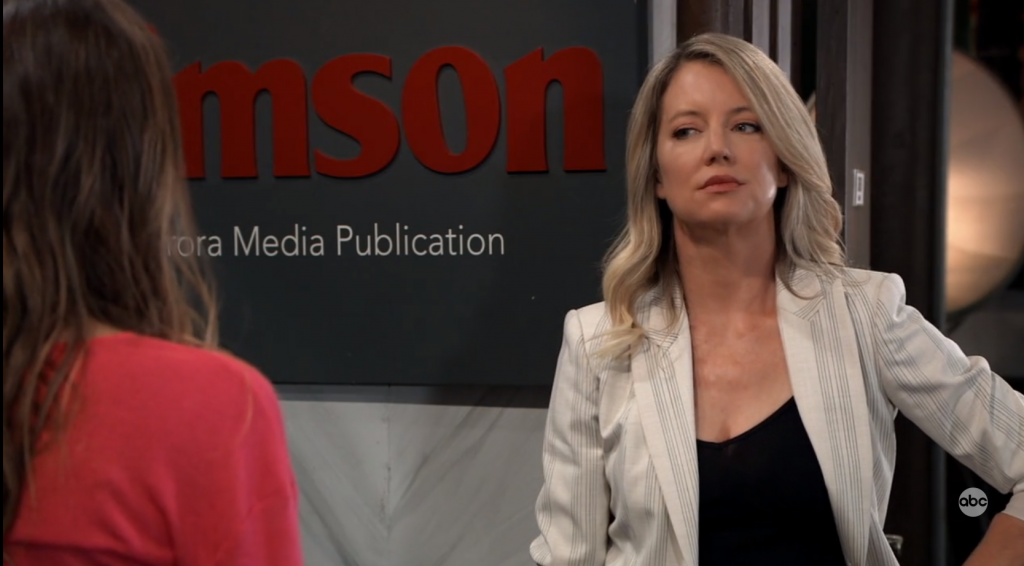 In story, after part of the secret is out that Sasha (Sofia Matteson) is not really Nina’s bio-daughter – Nina, who has had everything she believed in fall in on her, tries to regain her strength to go back to Wyndemere to face Valentin, and move out of his house.  Once there to get her things, Nina tells Valentin (James Patrick Stuart) that where she goes is no longer his business.

Valentin admits that he was looking for her daughter which caused this whole situation, but he also does not admit his part in the Sasha cover-up and that he was the one paying her to portray Nina’s daughter.  He even goes so far to insist that Sasha’s actions were all her own.  Nina still does not believe him.  After she packs her bag, and heads for the door. Valentin tells her that his life is meaningless without her. Nina basically says, “True, that” in so many words … and makes her exit.

Next, with sunglasses on, Nina returns to the workplace at Crimson where she finds Sasha with Michael (Chad Duell) and Lucy (Lynn Herring).  She calls security and tells them all to get out.  Sasha then spins a yarn, much to the chagrin of the audience, knowing that if she implicates Liesl (Kathleen Gati) and Valentin, Nina would be devastated.  So, Sasha says she acted alone and faked being Nina’s daughter, when she was contacted by her attorney, and she was in cahoots with the guy … until he suddenly died!  What!?  Nina looks very suspicious… and throws back that how would Sasha know how to change three DNA test results.  Sasha had an answer for that – she had a friend who works in a lab do it.   Nina still believes she could not have done this alone without Valentin.  Then, in a heartbreaking speech, Watros as Nina shares how she has lost everything: her daughter, her marriage, hope she even had a daughter in the first place, and the list goes on. 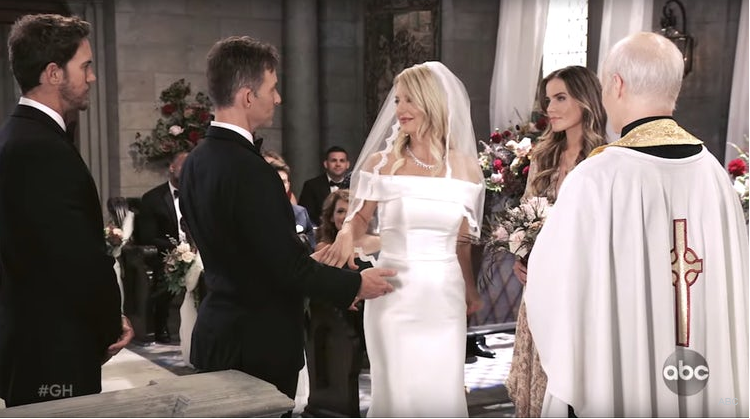 And … let’s not forget Tuesday’s nuptials, which we gave our review and recap previously here.  It is there that Nina is first blindsided, and the betrayal, rage, and hurt displayed by Watros was all top-notch.  Here is Nina finally marrying the man she loves, whom she had to allow herself to come to trust all over again so she could be with him, even with all of the warning signs around her.  Not only does she have Lulu (Emme Rylan) spoil her nuptials with exposing the secret of Sasha, but then has to process the deception  which means to her that maybe she never had the child she so desperately wanted and believed she had all along. 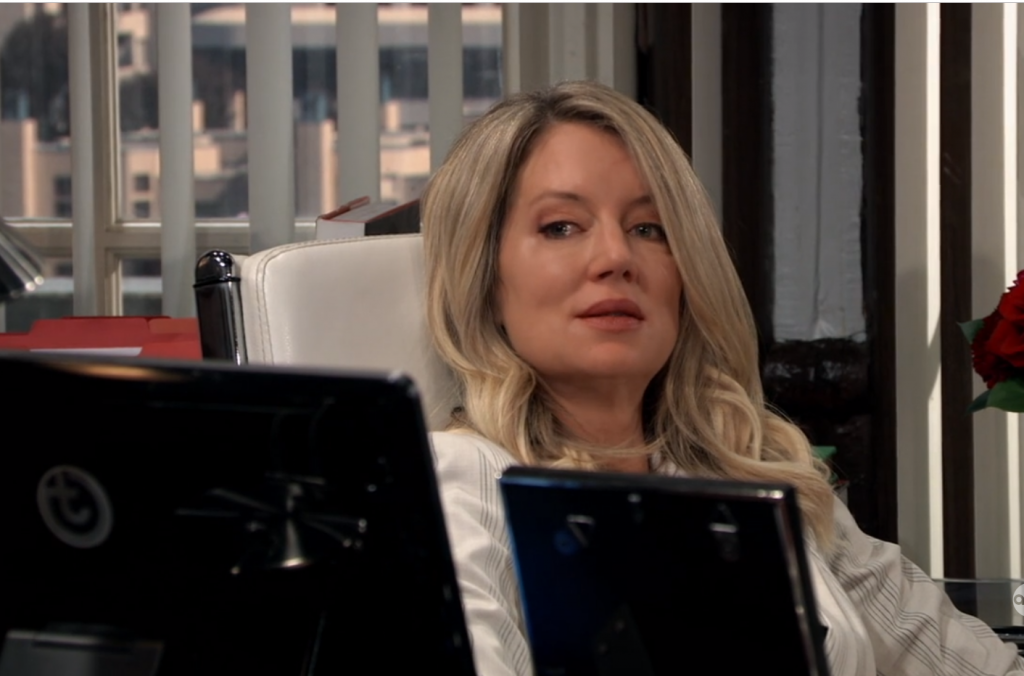 The Friday cliffhanger though posed an upcoming intriguing scene.  Ava (Maura West) showed up with a bottle of booze to commiserate with Nina at Crimson (The same woman who Nina literally ripped the baby right out her and kidnapped it in a heinous revenge plot).  Will these two wronged woman team up?  Will there be hell to pay?  That is yet to be seen, but without a doubt, Cynthia Watros is Michael Fairman TV’s ‘Power Performance of the Week’.

Let us know if you agree with our pick via the comment section below, and what you thought about Cynthia’s work in these key episodes.

James Patrick Stuart Finally Gets His Photo In The Hallways at General Hospital: Watch What Happens!