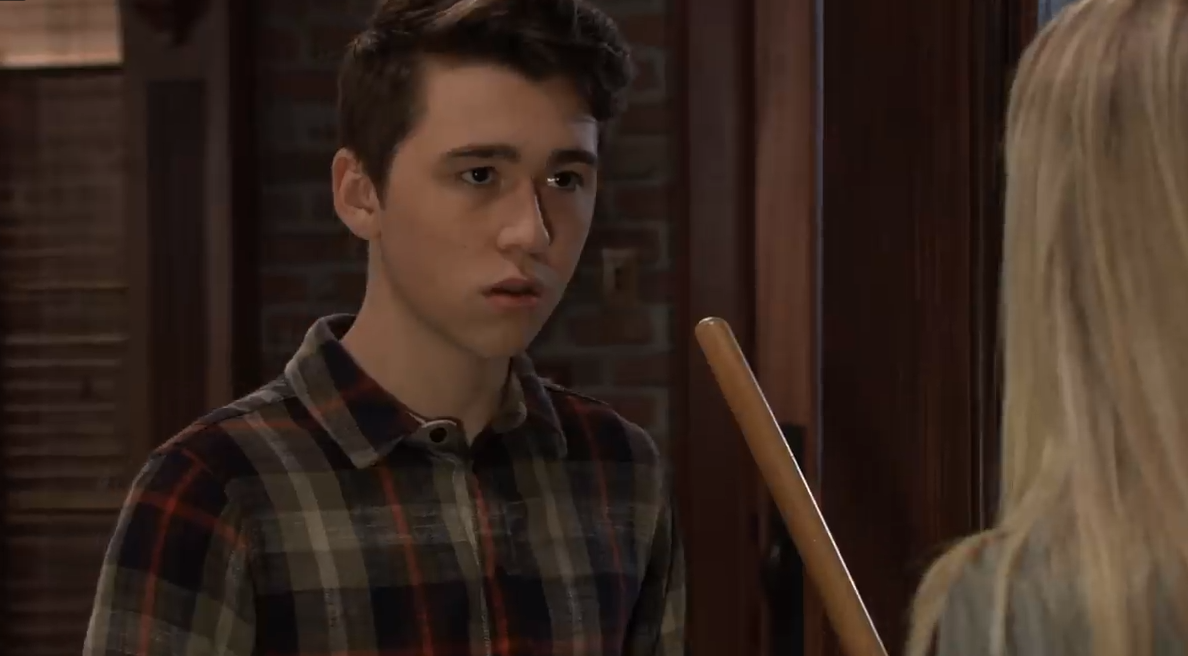 Here’s what’s coming up on General Hospital for the week of November 26th.  Jordan (Brian Nicole Henry) and Curtis (Donnell Turner) are set to make it official with their “I Do’s”.

Thanksgiving in Port Charles continues with ramifications for some, while Josslyn (Eden McCoy) is about to have an emotional showdown with Oscar (Garren Stitt), now that Cameron (William Lipton) dropped the bombshell that Oscar is very sick.

Meanwhile, Kiki (Hayley Erin) is reeling from the treachery of her own mother, Ava (Maura West), who make it look as if Griffin (Matt Cohen) and Sasha (Sofia Mattsson) had slept together, and Nina (Michelle Stafford) and Ava’s long-standing rivalry is re-ignited because of it.

Here are more teasers below:

Ned is uneasy about Julian being at Thanksgiving.

Nina has her hands full.

Nina takes Charlotte to the ballet.

Curtis is the bearer of bad news.

What are you looking forward to seeing the most next week on GH? Let us know in the comment section below, but first watch this teaser for Monday’s episode.

Would like to see Jasam reunite soon..Oscar get a miracle. .Spencer gets busted. .bring Morgan Nikloas n Sean back (recast if necessary) ty❤

Send Spencer back to France. Morgan back.

Sorry, not interested in the #teenscene, filler at best. My only hope is that Julian is able to secure passports and new IDs for Kim and Oscar, and that’ll be the end of them and this awful storyline.

Loving the Drew/Oscar/Kim story since it allows more great performances from Tamara and Billy. Bored with Ava’s disgusting dirty deeds, especially since it means more frozen-brow, worried/afraid looks from Griffin. Can’t stand Charlotte either, unless they’re auditioning a “Bad Seed” storyline. Sorry, not much of interest lately.

Agreed, not interested in much, and the escape room episode? I watched 10 minutes, cringed, and turned it off. Who hired these writers?

Loved the Escape Room much fun. Better then getting drunk

I enjoyed the escape room episode very much. Creative use of the show’s history! Nice job to all involved.

I agree about Charlotte, she’s turned into a real brat.

Agree, but also to know where Jason was kept and how

Bonnie, wasn’t Jason kept at the clinic in Russia? That’s where Ava found him, whilst there getting treatment for her face, too bad they couldn’t have kept her there.

And I hope they can repair Julian relationship with Sam

Love to see Julian bond with Sam and Jason

Some movement in any of a dozen dangaling story lines… GH has become like watching paint dry… there is more reveal in a half our of Days as there is in 3 months of GH… time to dump this writing/ptb crew… they blow chunks… pbr out….

Nothing really..Just wishing that Ryan will kill off all these new and unneeded characters and that annoying Spencer!!! GH is really not entertaining at all..I usually things around the house while I have it on.

AGREED, & any parking lot hires. Although, I lie Spencer, in small doses.

“Do” things around the house while I have it on.

Omar, sorry but I love Spencer. He is over the top, but such a precocious young man, and eccentric yes, but so loving.

kiki is supposed to get murdered soon…

I knew Oscar would not die since his brain tumor was brought into play..
Knowing he won’t die and that all will be well that just makes it boring..
watching and knowing is the same as reading the last 3 pages of a murder mystery novel (throw the book away)

Wow!… GH has become sooooooo depressing… the story lines drag on and on for moths with no payoff in sight… there is more reveal in the first 1/2 hour of Days than there is in 3 months of GH… the writers and PTB need to be replaced… ASAP…