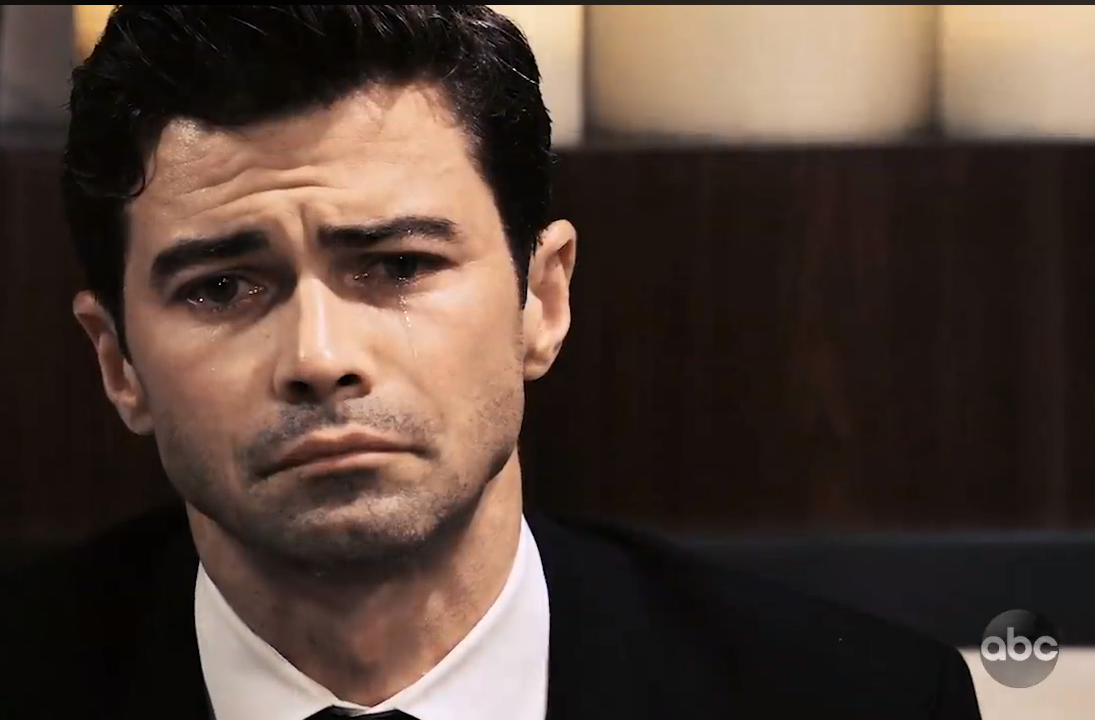 Wednesday’s episode of General Hospital brought with it the demise of Kiki Jerome (Hayley Erin), who was brutally killed by serial killer, Ryan Chamberlain (Jon Lindstrom).  The thing of it is; Kiki’s body was found in Jordan (Briana Nicole Henry) and Curtis’ (Donnell Turner) honeymoon cabin on the Haunted Star.

Thus the ‘Star’ is now a crime scene, and the guilty party is looking to all to be Dr. Griffin Munro (Matt Cohen), Kiki’s boyfriend.  Did Ryan set this all up so nicely so Griffin would look like the perfect murder suspect?  Seems like it!

Meanwhile, Ava (Maura West) has succumbed to a night of passion with Ryan, who she thinks is Kevin, and who has been telling her to channel her inner desires.

Jordan has sent Chase (Josh Swickard) to check out both Griffin and Kiki’s places for any evidence, or clues to the murder.

What will happen next?  Well, one thing is for sure; Griffin is banging down Ava’s door ready to blame her for murder, but she is actually sleeping with the real murderer… of her own daughter!

Check out this just released promo from ABC and General Hospital which kicks-off the next leg of this story.

Then, let us know.  Do you think Griffin will end up being wrongly-accused for the murder of Kiki? Comment below.

Hayley Erin Signs Off From GH: “RIP Keeks …. Thank You For This Wonderful, Wild Ride In Daytime”

The harrowing “No” from Maura West’s Ava is going to be an Emmy worthy scene. I see it happening. The performances about to come from this storyline, in the last of the November sweep period of episodes, are going to be fantastic to watch!

As much as I hate these mistaken arrests that the Port Charles PD is famous for, I agree the actors are going to have a field day. Maura West is a national treasure.

Maura West absolutely OWNED the final two episodes of the week, and I can guarantee that she will be doing it for the remainder of 2018!

YES! Love Maura! She is amazing!

She sure is, love Maura! PCPD is SO inept.

Boy, is Ava going to flip when she eventually finds out she bedded her daughter’s killer!!! I will be feeling sorry for Ava when Maura West has to play those scenes and we know she’ll chew scenery when she does get those scripts. I love it!!! (Maybe another Emmy nod for Maura when we get there?)

Hope Smarmy Peter is Ryan’s next victim. Really, there will be no need to investigate.

AVP, why the heck was that jerk at the wedding? Curtis doesn’t like him. Jordan doesn’t trust him. He just forces himself on people (just because you’re invited somewhere doesn’t mean you should go). And I can’t believe poor Kirstin Storms has to babysit Laura Wright’s boyfriend.

AGREED. She has to make the boyfriend look good and he needs to bring home a paycheck. She was married to an architect/entrepreneur, she’s downgraded. Now, the viewers are forced to suffer, along with the actors who prop him up.

I hate that they’ve killed off Kiki, with that said, that doesn’t mean it won’t be riveting to watch the story unfold but I’m ready for Ryan’s terror to end, I don’t think I can take this storyline for to long, poor Griffin, if he is set up for the murder, I know he’ll have Anna on his side. omg, this will be must watch tv this week and next as everyone learns of Kiki death, Ava is going to really pay at the end once it comes out that “Kevin” is not Kevin, and that Ryan killed her daughter… Read more »

Ryan’s storyline is the best thing on General Hospital. Griffin wouldn’t be in jail for questioning if the police officers were smart; these Soaps have stupid police Commissioners and officers. The only Soap who appears to have a decent police officer is Bold and the Beautiful; Officer Sanchez. However, he can’t get anyone to cooperate with him.

Well, it’s just as I feared. Kiki dies and we will now be treated to weeks of Griffin with the exact expression from the above graphic: furrowed brow/worried and afraid. Enough already! It was a bad decision to kill her off and now the audience will endure ANOTHER idiotic performance from the Port Charles PD, blaming the hot doc for her demise. Tell me, will he be accused of Mary Pat’s death and beheading also? I can just hear the brilliant Jordan: “You’re a doctor on suspension, I can see why you’d resent a nurse”. Oy vey!

hahaha, NuJordan hasn’t grown on me. & “hot doc”-love it! They forgot about Mary Pat!

Ryan really works fast! How the Dickens did he find the time to rush over to Kiki’s place, chase her around and kill her, get her body onto the Haunted Star without being seen and get back to Ava’s in the span of one hour? Dear Heavens! And we’re to believe the police think Griffin killed Kiki over one argument? Oh golly, they are writing the PCPD as the dumbest officers on the planet. When they didn’t suspect Carly of Mary Pat’s murder for longer than a minute I thought they were finally giving the police their due. Hope Griffin… Read more »

Of course they will blame Griffin when have they ever been right about a suspect please.

I believe that Soap Operas have very stupid police departments and bosses who make them more stupid ; plus, unfair. Why arrest Griffin? Why are the writers making everybody seem empty headed or air headed ? Also, I noticed that Anna took Julian down when he came into the department ranting and raving about getting Griffin. However, if Sonny had come into the dept. acting in the same manner , not one person would have laid a hand on him.. Chase the officer, came in tough with Sonny and everyone else, now he’s a toothless cat. The only police officer… Read more »

What if they switch the script and prosecute Ava instead. Poetic Justice, and just when she’s been convicted Ryan/Kevin tells her what he did and why, well I wouldn’t want to be in ear range.

Seems that the fans are divided – one thing is for sure, I’m glad I’m not able to watch it. I liked Kiki when she was played by the gal from OLTL but I eventually grew to like Erin’s work….. even still, I hate when serials kill characters who are supposed to be the future generation of the show. OLTL did this in the 90s and it was really frustrating… storyline after storyline was all about killing legacy characters’ kids. I get that Ava isn’t a legacy character or anything, but Kiki had real connections to the town and all… Read more »