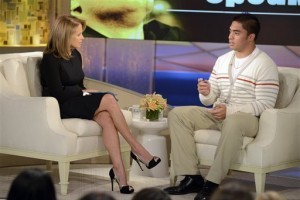 Te’o has been in the news of late and all the rage with the confusing and mysterious “catfish” scheme where Te’o was reportedly duped into an online relationship with a fake girlfriend who he originally believed had died!  However in the interview with Couric, Manti revealed he maintained the illusion of his dead girlfriend in the weeks after he received a call claiming that Lennay Kekua and her death were hoaxes claiming: “Katie, put yourself in my situation. I, my whole world told me that she died on September 12. Everybody knew that. This girl, who I committed myself to, died on September 12th.”

Te’o has said he believed Kekua, whom he thought was his girlfriend despite never meeting her face to face, had died of leukemia on September 12 after a car accident left her hospitalized. “Now I get a phone call on December 6, saying that she’s alive and then I’m going be put on national TV two days later. And to ask me about the same question. You know, what would you do?” Te’o said.

In addition, Couric pointedly asks the question that has come up across the country that was this all a cover-up because Manti is actually gay?  Te’o answered a resounding, “No, far from it.”   Later, Te’o revealed he did lie to his father and when Couric asked why, Te’0 responded it was his way of getting approval from his dad of this young lady, and he thought if he told his dad he never met her, his father would say it is a red flag.  He then stated, “It was a red flag. I obviously should’ve seen.”

After the jump, watch the clip of Katie asking Manti if he is gay, and why did he lie to his father.  Then tell us what do you think of this bizarre scheme? Do you now believe 100% that Manti was duped?

Mix & Mingle With Roxy & Delphina Event! Do You Hope Kristen & Delaria Are Part Of OLTL Reboot?

I simply do not understand why this is news worthy, and why it is gettng the attention that it is. Okay so Katie is interviewing him today. I still won’t watch. But my big question is to you Michael why are you waisting time on this crap?

I have to agree. I know its included here because Katie is a part of daytime, but in this day and age for her to be asking if he’ s gay is dumb. And putting it as the headline for this story here, well I have to say I don’t see the point.

“….why are you wasting time on this crap?”

Your soap box is loaded with excrement.

You are right on Angela. I had hoped when I saw this that NO ONE would comment, but people are. So here are my two cents:

I remember when KATIE was making the rounds and trying to drum up interest. So I went back to see what the whole premise for her show was SUPPOSED to be about. Well I found that it was “news and topics that people care about.”

THIS subject is something that we should care about? They should dry that one out and fertilize the lawn with it.

I am jubilant that people are expressing their two cents.

I care about THIS persons feelings.

Well here is my two cents he got his behind handed to him for the Heisman Trophy this year by a freshman Johnny Manziel from Texas A&M.

Food for Thought…. I hope Rhode Island is the next… 10th state to marry ALL People…. —————————- As In President Obamas’ Impassioned Presidential Election Address: “Our journey is not complete until our gay brothers and sisters are treated like anyone else under the law,” he said. “For if we are truly created equal, then surely the love we commit to one another must be equal as well.” ———————————– The Military that we hold close to our hearts… ALLOWS all Men and Women regardless of sexual orientation to serve Proudly. ————————— The Sports World…. (if in fact Manti Te’o is Gay)… Read more »

I agree asking if he was gay is none of her business- does she ask her guests if they are straight- I don’t think so. As to covering this topic here- well if his story was a soap opera story line we would be rolling our eyes about how lame it is. Honestly, who calls a person they never met their girlfriend? And if he thought she was why didn’t he want to go her funeral when he thought she was dead? This story is so fill with gaps and makes no sense- are we sure MAB wasn’t his script… Read more »

A persons’ Life isn’t hanging in the balance, here?…. if one person is affected/effected by, what people say think and do. That happens way too often.

Support for ALL people is the ultimate road taken…

I refuse to make light and be nonsensical about issues that are a part of all of us.

Okay Patrick you want to be serious- I can be serious. Firstly I wasn’t making light of this man’s story I was answering the question asked, which was whether I believe he was duped. I do not- the story sounds too fake to me, so I used the whole soap opera metaphor to illustrate how fake his story sounded- I was being sarcastic. This is a website for soap operas, therefore if you wish to engage in thoughtful and lively discussions about politics, religion or civil rights, I suggest you find sites that engage in those discussions, so you won’t… Read more »

I want; that the LGBT Community has a voice…. in sharing with you and I myself, am learning, along the way… that give and take… right and wrong… civil liberties and respect… be gleaned and minded…. by All persons choosing to read all perspectives.
——————————-
if convesations are dissected and taken out of context… then, i choose to see this as a cumulative of… and letting all the facts and opinions, be given equal time.

I will say…. when i first read the headline…. I. like Christine… was… here we go again…. and when i read the first post… ie: Angela….. “…why are you wasting time on this “crap”. operative word…. “wasting time on crap”… well, that gets tiring… and yeah… can fire up the best of them…. ire, frustation, anger, jubilant, misled, tested, it’s my way or the highway…. it’s all a mixed bag…. if i’m steadfast in my beliefs… and have convictions… that are strongly opposed and differing… I will rise to the occasion and man up… I am not on here steering… Read more »

Patrick- Sometimes we all forget the power words can have- words can bring healing or understanding, but they also can cause division and pain. I hope you did not think I was berating you, I was not. I was merely challenging you to the bigger person, to use your words wisely, so those you wish to hear you, will listen. When we use our words to put down others, even though they were guilty of doing the same, they will no longer hear us, and I believe your opinions deserve to be heard. I still don’t believe this particular website… Read more »

I stopped believing he was duped last week, because at certain times throughout the interview, he was laughing about all of this…Check his expressions closely. I think he wants the attention to set off his NFL career, and got two friends to help him do it. We’re the ones being duped at this point imo.