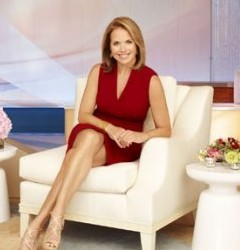 Last week, we brought you the news that the axe had finally fallen on Katie Couric’s Disney/ABC syndication afternoon talk show, Katie!   The show will end after only two seasons, but  now in the final six months of production, January to through June, due to budget issues the talker will shift to a mostly live format!

A representative for the series told The Hollywood Reporter, “The content of Katie will mostly be produced live on four out of five days.  In order to keep the production schedule to four days a week, the fifth show will be taped but is expected to be limited to the one-hour time allotted (less commercial time).”    They added that the reason to switch to the mostly live format was in the works prior to the news of the officially cancellation.

THR revealed that originally: “Couric’s tapings ran longer than the allotted time because she wanted to keep going to get as much good content as possible.  In some cases, shows were running twice the scheduled time.  A source close to the show insists Couric’s decision to run longer was made jointly with Rachel Miskowiec, who was brought in last May as executive producer for the show’s second season. The result was that producers and editors often racked up overtime to cut the content to fit the one-hour format, triggering significant budget overruns. Katie was already one of the more expensive daily talk shows ever produced, in part because it had more field producers and news staff than most.”

So, Katie was clearly an over-budget talk show that was made room for in the ABC line-up for affiliates in the original timeslot of General Hospital!  And everyone was complaining how over budget soap productions are!  Well, it looks like it happens in talk shows too!  What do you think of the switch of Katie to a mostly live format, and the troubles the show has had?  Weigh-in!

You know, an awful lot of unexpected surprises can happen when you air live….like a guest suddenly making a speech to ABC to bring back the soaps…or a large portion of the studio audience breaking out into a We Want the Soaps chant….

SO happy ABC FINALLY CANCELLED HER SHOW!!! I ONLY WATCHED HER SHOW IELLSB WHEN SHE DID THE 50TH ANNIVERSARY FOR GENERAL HOSPITAL & WHEN RICK SPRINGFIELD WAS ON!! I’M A HUGE ELLEN FAN!!!

They can always use reruns of OLTL in place of Katie until they figure out what their going to do. That will save on a lot of money and I bet it gets better ratings.

Honestly, I don’t know what to say about ABC Daytime and their budget problems. But one possible suggestion is that they may want to get out of producing original content, and just become a giant billboard like AOL. Hey, it could be groundbreaking! Just think about it… an all infomercial major network! LOL. ABCommercial! 😉

That will never happen mike, OLTL and AMC will never come back on abc. Time to move on, I’m over it now. i enjoy watching general hospital and days of our lives.

So true..
I can not understand how some think ABC will air the 2 soaps, again..
It will never ever happen, they are over/done/gone the same as the canceled soaps before them..

Unless! PP by way of a miracle gets them up and running, again, and that is not probable..

The 2 soaps are no longer in ABC’s hands and when or if ABC gets them back they will collect dust on a shelf, forever archived..

I have an idea on how they could save even more money-just stop producing the Katie show right now. Then they could broadcast repeats of the last 6 months of OLTL, bring OLTL back into production and give us new episodes after 6 months.
I guess that would be a longshot! A guy can dream, can’t he?

I am happy about anything that shows just how stupid ABC is. It is so sad that our wonderful soaps are being replaced with these awful talk shows. Bring back AMC! Bring back all the soaps!

Why bother? Get out now!

Funny, talk was cheap(cheaper than soaps) but in this case it wasnt and the show gets cancelled…but 4 those who dislike Katie…well, she still has her fans and we havent heard the last from her…i wish daytime would experiment with a new soap…it could air for 6 months and repeat 6 months to help keep costs down…also in place advertising would be another way to earn extra money to pay for these shows…maybe a character could be shown ordering and drinking a pepsi or another character is shown buying a Ford truck…it would also add a little realism too…just saying!… Read more »

I MO the budgets were just an excuse. Wonder what they will do now. If it isn’t our cancelled soaps I will not watch. I am looking forward to Tainted Dreams ABC can’t touch that

Here an idea – lets bring back soaps in a LIVE format.
See what rating the Sound of Music got.. people love LIVE (ex. Kelly and Michael)

Everything in TV is cyclical… every ‘genre’ always comes back.. but changes slightly.

What better way to create a buzz … bring back LIVE soaps… you can bet ABC would have an audience increase..

Oh did I mention bring back OLTL…

These budget and over run issues make me laugh… I’m quite sure that OLTL was giving ABC more value for less money.

maybe they can barrow Frank Valentini to get them under budget. lol!

WHO CARES, I DON’T , SHE IS AS BORING AS WET DISH RAG THAT FELL ON THE FLOOR, HOPEFULLY WHO EVER GETS HER PLACE DOESN’T DO WELL EITHER, I WOULD SAY PUT THE SOAPS BACK, BUT ABC/ DISNEY DOESN’T CARE AND WON’T ADMIT DEFEAT, BUT AT LEAST IF THEY DID THEY WOULDN’T HAVE TO REPLACE THEIR DUMB TALK AND FOOD SHOWS WITH ANOTHER FAILURE.

Her contract was too expansive for what the ratings were getting which is what led to her downfall. No surprise here, this woman has always been money hungry since her NBC days. Despite that, her failure will not bring back AMC and OLTL. Katie’s ratings weren’t stellar but they weren’t The Revolution’s numbers either. ABC will just produce another talk show but this time with an host that ask less money than Katie did. And if that talk show with the other host gets ratings similar to what Katie was getting, ABC will keep it. Sad but true. ABC absolutely… Read more »

Nothing against Katie or her show (don’t watch it, don’t know), but the fact that the network allowed the show to continually run over budget after what they learned about “inflated” soap star salaries and show production costs, really pisses me off. Soap stars supposedly make less than primetime stars; yet at one time, the soaps were the “cash cows” for the network. Still, the networks have treated their soaps/stars badly with very little support while they paid gross sums of money to their night time stars and promoted the heck out of them. Soaps started being cancelled and network… Read more »

Katie and the majority of talk shows are repeats….. unlike daytime dramas.

now that Christmas is over – I dont feel as charitable to this woman anymore.
she – along with the past daytime boss – ruined the soap genre…. let her go to yahoo dot com… that way we dont ever have to see her again.

bring back the soaps…. you still own them ABC!