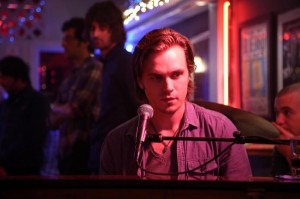 Tonight, the wait is over for fans of the nighttime soap opera and musical drama series, Nashville, when it returns for an all-new second season at 10PMEST/PST  on ABC! When we last left the folks in Nashville, Rayna  (Connie Britton) and Deacon (Charles Esten) were in a car crash, Gunnar (Sam Palladio) had proposed to Scarlett (Claire Bowen), and Juliette was reeling from her mother’s death!

Now EW.com is giving fans a list of ten things to look forward to in season two direct from the mouths of executive producer Dee Johnson, and series star, Hayden Panettiere (Juliette).  And while you have to check out the entire top ten, here are  three that stood out to us!

Singer/songwriter Will (Chris Carmack) will continue to be in the closet! “He is going to try really, really hard — harder than maybe anybody has ever tried –to sublimate a part of his personality that he presumes will be an obstacle to his stardom.  Will we see that guy who clocked Will at the bar again? ‘You can run, but you can’t hide, right?’Johnson related.

Avery (Jonathan Jackson) will be a character who will be come more likable this time out:  “He comes into the season, I think, with a truer sense of who he is and what he wants. He and Juliette kind of embark on a friendship,” Johnson says. “That’s as much as I’ll say about that.”  Panettiere adds, “The thing with Juliette is she’s been through so many relationships that it’s gotta be really different this time. It’s gotta mean something more. And it’s gotta be built up over time. I think they genuinely are going to have a beautiful, much-needed relationship.”

Juliette will get a taste of her own medicine when a younger rival hits the Nashville scene:  “We’ll soon meet new label mate Layla (Aubrey Peeples), the runner-up of a reality TV competition — who’s from the Northeast. I think that from somebody like Juliette’s perspective, she just sort of dropped in with a parachute and is suddenly at the top of the charts. What’s so great is that you can see the same sort of feisty, fiery Juliette but in a much more justifiable way,” says Johnson.

So are you looking forward to the closeted country & western singer, a new rival for Juliette, and Avery and Juliette getting closer in season 2? Weigh-in below!

nashville is most probably going to lecture audience abt gay issues and tolerance for gays only once will comes out of closet. How many rehashed storylines abt coming out of closet does hollywood have to churn out on tv shows? Bec hollywood advocates tolerance for gays only. No new chars who are Asian american on nashville though. Typical failure from abc tv shows. They only cast Asian american women if char’s a dork like Asian american actress on rebel’s new sitcom and if char’s a martial arts expert like ming na on shield. Only stereotypical roles from “tolerant/classy” hollywood for… Read more »

You even turn THIS into an Asian American rant? Even if EVERY show you watch hired Margaret Cho you would not be happy! Enough already!

How many Asian country music singers do you see burning up the charts? And to clarify…I have nothing against Asians! It just gets very tiresome that this person has nothong else to say about ANY topic on here..its always about discriminating against Asians!

Just out of curiosity, are there that many Asian-Americans even IN Nashville? And as for being closeted, I live in the south and homosexuality isn’t nearly as accepted down here as it is in the rest of the country. I don’t like that, but it’s a fact I won’t deny, either. So it makes perfect sense that someone in the Nashville music scene would want to stay closeted. It’s called self-preservation, an unfortunate reality.

Nashville would be watchable if it dumped the terrible singing, they are just not that good..
And all the songs sound the same ..

LOL…the songs are fabulous…they’re downloaded in great numbers…Jonathan Jackson (Avery) has his own band in “real life”, Gunnar is also a musician…the duets are great…Raina’s daughters…sisters in real life are also singers and have beautiful voices. Love all aspects of this show.

And, uh…the show is NASHVILLE, about Nashville, country music…

I’m thinkin’ Nashville can do without your viewership.

I really like this show. If they made Will straight and made Juliette Rayna’s daughter, it would be awesome!

Ayda Fields Guest Stars on The Bold and the Beautiful