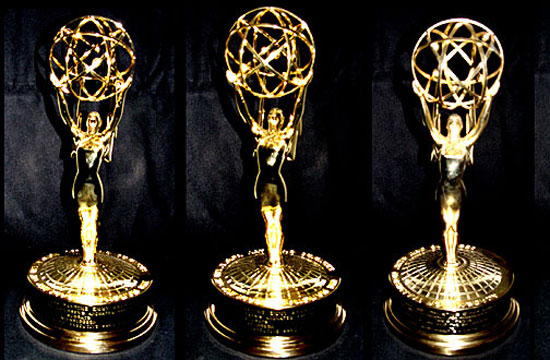 This morning on Twitter a bit of firestorm began after word got out that NATAS and Pop were looking for soap fans to fill the bleacher seats for the upcoming red carpet at this year’s 42nd Annual Daytime Emmy Awards to be held on the Warner Brothers lot in Burbank, California on Sunday night, April 26th.

But there was one caveat, that they were looking for soap fans 45-years-old or under to fill the seats, which rankled many a long time soap fan, who have supportive their shows, and who would love a chance to see their favorites up close and personal.

Now this afternoon, NATAS Senior Vice President Daytime Emmy Awards, David Michaels, cleared up the controversy when he informed On-Air On-Soaps, that it’s actually fans 12-years-old and up who are more than welcome to join the festivities if they get a lucky spot on Emmy night.

When On-Air On-Soaps spoke to Michaels to get clarification on the seat situation, David replied:  “It was never our intention to exclude any of the passionate and dedicated soap fans, who would love to be with us on Emmy night.  We are sincerely sorry for any confusion or misunderstanding this has caused, but we love all of our daytime fans who have supported us through thick and thin.  However, I believe, this situation has been blown way out of proportion.  An email went out that NATAS was unaware of that had some unfortunate wording, which at its face value could really be misconstrued.  Based on parameters set forth by our venue this year, the only age restriction we have been informed of is that people must be at least 12-years-old and up.  Currently, the responsibility of filling these limited number of seats has been entrusted to the very capable hands of the official fan clubs of the four Daytime Dramas to select those lucky few who will join us on April 26th.”

Pop, the television network airing the Daytime Emmys, also weighed in on Twitter when the Emmy fan seating tweets made the Twitterverse stating, “Pop is shocked to hear of this. We celebrate fandom & welcome fans of all ages. We are taking action to fix this now.”

So, glad to know that soap fans are welcome, if they get one of the limited number of seats to attend the Red Carpet proceedings on daytime’s biggest night, even if they are over 45 ?   Share your thoughts below!

Angell Conwell Makes A Return To The Young and the Restless!

The Bold and the Beautiful Bombshell: Maya is Transgender!

I guess POP is too embarrassed about the “real audience” for soaps are 50+ overweight housewives and gay men. Talk about fantasy. They’ll have to pay people to sit in those bleachers. LOL.

Sorry, I apologize, Julie. I am not quite grasping what you mean? ….little confused. Could you expand? I can’t tell If you’re using sarcasm or not.

Ok..
This needs to be seen, the email–

”’An email went out that NATAS was unaware of that had some unfortunate wording, which at its face value could really be misconstrued. ”’

How can we possibly decide of the intent if we can not see the email ?

We need the original email !

If the emmys were to exclude fans over 45 i definately would be pissed…see how angry that made me-i said a naughty word…seriously, if it wasnt for us over 45 year old dedicated soap junkies-ive been watching since 1964-i doubt the remaining 4 soaps would still be around for the next generation…i would boycott the emmys and POP as well…lets stop age discrimination…we arent all in the boneyard yet….youth is fleeting…your all going to be up here pass 45 quicker than you think!!!

Not only you, jimh. My mother and grandmother were both really, really pissed. Gran has been watching since the 50’s. She loves her soaps. Viewers over 45 are the most loyal fans…..

The daytime emmys are a joke, after last years fiasco. I will never watch again. I love my soaps. I love watching Days and GH.

Well I am over fifty and to be honest, even if I got the chance I wouldn’t go. I was never a fan of the red carpet, never watch it on television, so less likely want to be there in person. But for those fans that love that sort of thing and if you are in your eighties, you should be allowed to go. Where there is smoke there is fire. I don’t see how you can get 12 and up and 45 and down mixed up. It sounds like there might have been a plan in motion, it got… Read more »

You’re so right, Mary. But, IMO, that is not the point, whether one would go or not….it is the principle behind this debacle.

Did anyone ever see the episode of Six Feet Under where Ruth, the mother, was talked into shoplifting by her friend played by Kathy Bates? She said she did it all the time and never got caught because women their age are invisible. Well, I think it’s high time we stop being invisible. This is a huge faux pas and should not be easily brushed aside. We are the ones who will be watching the show and we are the ones that watch the shows being awarded. It’s kind of like having a veterans day parade only honoring veterans since… Read more »

Ratings are always like that, unfortunately. Unless they get enough advertising dollars geared toward an on over 49 demographic…it’s not cost effective for them. There have been so many great shows with seemingly good ratings that don’t get renewed. Maybe they should literally delineate television stations by age. Get advertisers geared towards one age group and place the shows that have the majority of that viewership there. Obviously we could all watch any show we want, but the market they’re targeting would be there. It’s all about money….even, and this is veering off a bit…when celebs or musicians go on… Read more »

I loved Harry’s Law…she played that role as no other.
And, I did see that episode. I was so young, its true meaning didn’t even phase me, I’m ashamed to say. So much wisdom, which I mostly have yet to acquire, is to be had from my elders. It breaks my heart.