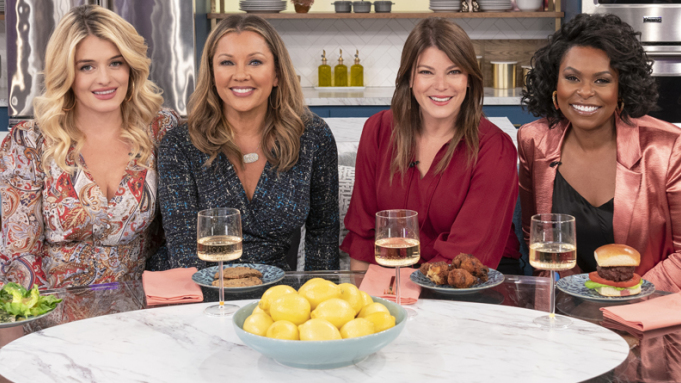 More new series in the daytime programming block look to be on tap in the New Year.  Now, Sony Pictures Television has greenlit a new syndicated series from the producers  of The Dr. Oz Show, slated for a fall 2020 debut – a spinoff called The Good Dish.

The new talk/foodie show which started as cooking segment called “The Dish on Oz” will be hosted by the former co-host of The Chew Daphne Oz (Dr.Oz’s daughter), along with Vanessa Williams, Gail Simmons (Top Chef) and Jamika Pessoa (The Next Food Star).

According to Deadline:  The Good Dish will provide simple shortcuts, everyday recipes and trends that will make life easier, bring families together, save money and most importantly…figure out what’s for dinner, according to producers.

The Good Dish marks the third new syndicated program announced for fall 2020, along with the previously announced Drew Barrymore and Nick Cannon talkers.

In a statement, John Weiser, President First Run Television for Sony PicturesTelevision expressed: “We have experienced overwhelming feedback from our audiences on “The Dish on Oz” cooking segments, which have been recently featured on The Dr. Oz Show. When Daphne Oz and this all-star ensemble were available, we recognized the opportunity for viewers, advertisers, and local broadcast stations. We have on-air tested this format and talent for two years perfecting this show we are now bringing to market. Spinoffs have the highest success rate of converting into multi-year franchises. In fact, spinoffs gave us the great Dr. Oz straight from Oprah!”

So, what do you think about another cooking series headed to daytime screens in 2020? First check out this promo for the series below and then leave your comments.

I am SO excited to finally be able to share THE GOOD DISH!!! Good food, good friends, good dish coming to you FALL 2020!! Thank you always for your kindness and support, it really means the world — much love! xx#VanessaWilliams@gailsimmons @ChefJamika @DrOz @TheGoodDishTV pic.twitter.com/urVN1onl89

Baby Oz stars in Chew II: the sequel nobody asked for.

Don’t care about any of these news shows, as long as they stay away from the General Hospital time slot. Every time I hear about a new talk show, I wonder if ABC deciding that they are no longer in the soap business is right around the corner. That will be a very dark day.

This sounds like The Chew, Part II. I understand that talk shows are cheap to produce, but why can’t food shows be on…The Food Network. Why do we need another talk show on the heels of Kelly Clarkson, Tamra Hall and the soon-to-be Drew Barrymore talk show. As much as I am trying to like Kelly’s talk show, it still feels like the same show/different host. Before another talk show is announced, I wish the networks would consider a game show or concentrate on increasing the quality of the four remaining soaps.

Lol…
another #OprahInfomercial posing as a show. Atleast we know who ownes Dr. Oz.
It also explains lots about his last failed show.
This will probably be just like Rachel Ray pushing unheathy qwik meals on the adoring public…?
We live in a world where it’s damn hard to get healthy ingredients to cook good food, so what are they selling us now?
Maybe Dafne will get a line of pots and pans and pet killing pet food like Rachel did.
just sayin???

Why is Vanessa doing a talk show?

Because she is unemployed and needs a job.