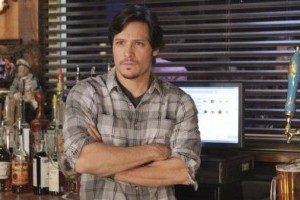 On last week’s episode of the hit ABC primetime soap, Revenge, viewers learned the paternity of Amanda’s soon-to-be born bundle of joy!  Nick Wechsler who plays Jack Porter on the series, spoke to The Insider.com, and revealed that although his on-screen alter-ego is not to pleased with outcome, he is!   Here are a few excerpts!

Wechsler on that viewers got the sense that Jack did not want the baby to be his:  “Look, this girl just decimated his heart a few times and just ruined his trust in her. He finally got to a place where he could wrap his brain around letting go of this girl that he thinks is the girl that he named his boat after and has been carrying a torch for ever since. He finally was able to let that go, and I think that was best for him. But now that she’s back, I think he feels like that’s like “F*ck you for coming back under these circumstances!” You only took my calls when you needed something and now you’re coming back this late in the game pregnant when you need someone to take care of it? That’s offensive. But Jack’s so decent and loyal, so he’s trying to silence the part of his mind that is screaming. I think he was hoping that it wouldn’t be [his kid] so he could be with [Emily] this girl who he has a huge connection with that he can’t explain. We kissed once, it was amazing, and now I have to go back to pretending I don’t have these feelings for her.”

Wechsler on what he thinks will happen when Jack finds out just what Emily has been up to in the Hamptons:  “That’s a good question. I suspect the writers would want to extract as much drama from that reveal as possible. The tension they’re trying to build with this is that she’s getting so deep into this lie, that if she told the truth now, everyone would be like, “I can never trust you again.” Personally, I think if Emily explained to Jack what she was doing and why he’d come to understand that. Yeah, she swapped identities with someone else and it’s a little out there, a little crazy. But I think once he thought about what happened to her, he’d want her to get revenge.”

Wechsler previews what lies ahead for Jack in upcoming episodes:  “The bar is Jack’s sole method of providing for his family and it causes some desperation, which puts him in some trouble. It sets up a scenario where he gets involved with some of the wrong people.”

So as the drama heats up for the Amanda/Jack/Emily triangle, there are plenty of other revelations and action on an all-new episode of Revenge tonight at 9PMEST/PST on ABC.   Here is the lowdown:  In the episode titled “Confidence”,  the Graysons are back in the spotlight and at the center of a media storm once again, while Emily’s past continues to haunt her.    Watch a preview of tonight’s episode below! Then let us know, are you rooting for a Jack/Emily romance?

Of course I am rooting for Jack/Emily. Its the classic meant to be but can’t be love story that pulls at the heartstrings.