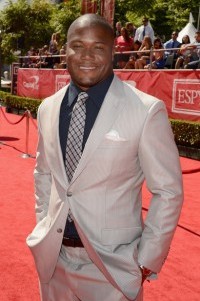 Tomorrow on the Thursday, March 13th episode of The Young and the Restless, Super Bowl fullback Michael Robinson of the Seattle Seahawks shows up in Genoa City and has scenes with none other than Victor Newman (Eric Braeden)!  How does this work in the storyline? You will have to as they say, tune-in tomorrow to find out!

However, On-Air On-Soaps spoke with Robinson as part of a press conference and found out that being on the number one soap is a dream come true for this star athlete!  In fact, how it came to pass that he got a guest spot on the daytime drama was also interesting!  H e let it be known on one of his appearances on the NFL Network and the events unfolded from there!  This is not the first time we have heard about male athletes that watch the soaps.  In fact, from Major League Baseball. to Professional Wrestling to the NFL, guys often have some time in the afternoon between games or practices, or when on the road,  and get caught up in the continuing drama and become soap fans like all of us!  Thus illustrating once again, that a diverse group of men are also tuning-in to the genre!

Here’s what Michael Robinson had to say on his whole Y&R experience and how it came about, being a man in sports  who likes soap operas, what he thinks of college football player Michael Sam coming out publicly before entering the NFL draft, and more!

Michael on what happened with his teammates heard the news that he loves Y&R:  That’s the thing!  This was the first time they heard about it.  As soon as I mentioned that I love Y&R on the NFL Network, I got a bunch of calls!  I got comments like, “Young and the Restless, dude?  You’re a big bruiser.  I didn’t think you were a fan of daytime drama!”  When I was at football practice, the guys thought it was funny that a big guy was checking up on his soaps at night.  But for me watching the stories from my hectic football days has more of a calming effect.  My wife and I, we watch it, and try to predict the storylines.  I think we always have to be high wired and high strung and aggressive and all of those things on the football field. So, it’s always nice to kind of come home, relax, and kind of ease your mind and watch the drama on the TV.

Michael on how he got into Y&R in the first place:  My mom and my father were divorced when I was very young, maybe five or six years old, and in one of my earliest memories, I remember my mom dropping me off at the babysitter’s house, and I was watching Divorce Court and it was on before Y&R.  I was watching Divorce Court thinking that I was going to get my mom and my dad on there!  But from that point, I started watching Y&R on my own and it went on from there.

Michael on learning lines and going toe-to-toe with Victor Newman:  You don’t understand … this is one of my dreams coming true.  I was going to sleep memorizing those lines.  I was practicing them with my wife at home.  I was saying them to anybody who would listen to me! Nobody knew what I was talking about, but I think it came out well. Eric Braeden does a lot of improvising, and I was just trying to stay with him, and I thought I did well.

Michael on what Y&R characters would he invite to a Seattle Seahawks game and put them in the best seats in the house, a box seat section : Victor, Nikki, Nick, and one of my favorite characters that no longer with us, Katherine Chancellor.  I loved her character.  I got a chance to talk to some of the producers while I was on the set.  They really expressed to me how much Jeanne meant to Y&R and how good of a person she was.  She brought so much to the show from what I’ve heard.  She was so professional, and was definitely one of the greats in soap opera television.

Michael on if he thinks his Seahawks teammates will watch him on Y&R:  I think they’re going to watch it because I’m on it.  It’d be great if they all also got hooked on the show.  Just for my friends to say, “Yeah, I didn’t know Y&R could be that interesting,” that would be great!  One thing about Y&R is they’ve never been afraid to be edgy.  They’ve never been afraid to put a young athlete on.  They gave me lines. At first, I thought I’d just be standing there, but they gave me lines!  I think that’s kind of what separates Y&R from some of the other daytime soaps!

Michael on racial diversity on the soaps:  I think that’s what caught me as a young kid and why I even watched.  It was the storylines and different people, seeing black people, black guys, and young black women on TV.  And coming from where I am from in Virginia, we definitely didn’t see that much of that.  So it was definitely gratifying to know that one day I could be there like Shemar Moore (Ex-Malcolm). Y&R does a great job integrating all races.

Michael on college football star, Michael Sam coming out publicly, and how he thinks he will do in the culture of the NFL:  I think Michael Sam is definitely a rebel.  I have a lot of respect for him to come forward like that, especially before going for a job in the NFL and performing in the combine and entering in the NFL draft.  He has an uphill battle, he really does.  I do not know how ready the NFL locker room is for a gay athlete. But I think if there is an environment that can handle it, with a locker room that has great leaders … that will be important.  It also depends on how Michael Sam can handle and make light of any jokes thrown his way. At the end of the day, it’s about how well he performs on the field, and it will make all the difference in the world.  I just think he has an uphill battle, but I think with what is going on with the world today and The National Football league … that is what needed to happen.

Michael on if he would he want his Y&R character to ultimately be a  good guy or bad buy, if this turns out to be a recurring gig for him:  I think I would want my character to be a good guy. (Laughs) But I play football, I’m big, so he’d probably be a bad guy.  But it wouldn’t matter.  I’d just want to be a part of the team.  It was like being part of the family being at Y&R.  And definitely, I would love to be a part of something like that ongoing.  I would hope that the Super Bowl win and this Y&R opportunity will be able to open doors for me in acting; because that’s something I would love to continue to do.

So, what do you think about Michael Robinson getting his opportunity to be on his favorite soap opera?  Are you glad athletes come forward and admit they watch soaps?

Wallly Kurth To Make A Return To General Hospital!

Disney/ABC Television Chief Anne Sweeney To Leave Her Position To Become A Director!

I am loving everything about this right now!

You wouldnt see Victor going out for a pass in a game for the Seahawks would you? No! So why would the number one soap on TV bring in a jock to take up air time? STUPID!