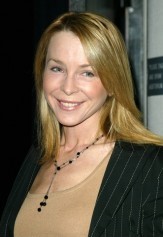 Signey Coleman will finally appear back on The Young and the Restless on the August 13th and 16th episodes of the number one daytime drama.  Coleman’s beloved and angelic Hope Wilson, mother of evil Adam, will return to the show in a series of flashbacks and dream sequences to help explain away why Adam became such a heinous individual!

Below is an interesting excerpt from her new interview with TV Guide Magazine’s, Michael Logan.  Coleman was asked about the fact that she had a different Adam to play with on her recent stint, since when she was killed-off .

Remember,  Chris Engen, who left under controversy when he would not film some uncomfortable scenes, played Coleman’s on-screen son back then,  and since then has been replaced by Michael Muhney.

Coleman on knowing about Engen’s exit and Muhney coming into the role of Adam and what surrounded the abrupt casting chage: “ I knew about it. Chris has remained a friend of mine. All I can say is that I’m very sorry about what happened. Chris is a dynamic actor — no getting around it — and his commitment is 110 percent but we all have to do what makes us happy and what feels right. I was all for him working through it and keeping the job, and I was very disheartened that it turned out the way it did. But Michael is wonderful in the role. I stepped into Cyntha Watros’s shoes as Annie Dutton on Guiding Light so I know how hard it is to be a replacement. We had a lot of meaty material and it was great chomping into it with Michael. And he’s so handsome! He could be Mark Harmon’s  brother. I worked with Mark on Chicago Hope and had some very intimate, up close and personal scenes with him so I know what I’m talking about! [Laughs]”

In addition, the actress also discusses the creation of her new web series which will also star, and involve former GL and AMC star, Beth Ehlers, titled River Ridge.