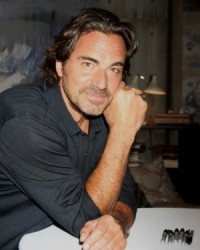 Always a cut upon, and thinking creatively out of the box, CBS daytime drama The Bold and the Beautiful is taking their fan event on the road from only being in its traditional spot of Los Angeles!

The series announced that it has scheduled a Pop-Up Fan Event in New York City on September 14th with already confirmed stars to include: Thorsten Kaye (Ridge), Linsey Godfrey (Caroline) and John McCook (Eric) with additional names to be announced soon.

The fan event will be held from 12:30 p.m. to 4 p.m. at the New York Marriott Marquis, the producers of The Bold and the Beautiful are hosting an official “Pop-up” Fan Event to celebrate its 29th Season on CBS Daytime.

Tickets to this exclusive Fan Event are $195, which will include a Live B&B Viewing Party, a Buffet Reception Lunch, B&B Gift Bag, Photo Opportunities, Set Tour & Memorabilia Giveaways and a very special “Interactive Experience” to coincide with B&B’s Premiere Episode (details to be revealed at the event).

Tickets will be sold on a first come, first served basis and are extremely limited.  This is a one-of-a-kind opportunity so make sure you purchase your tickets soon!  Click here to purchase you BOLD tickets to the event, east coasters!

What do you think of the idea of “Pop Up Fan Events?” Would you like to see more of them in the future in different parts of the country? Will you be checking out the B&B stars in NYC?  Let us know!

EMPIRE Game On! An Inside Look At What's Ahead For The Second Season Of Fox's Hit Soap Opera!

I would love to see more B&B events through out the country.

I would love to see all the soaps consider doing these “pop-up” events in various parts of the US.