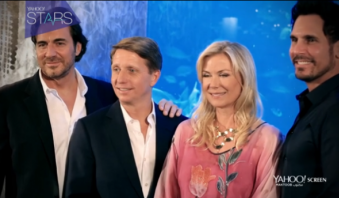 In a historic moment for daytime soaps, The Bold and the Beautiful trio of long running series star, Katherine Kelly Lang (Brooke) along with Thorsten Kaye (Ridge) and Don Diamont (Bill) have begun their shoot in the Middle East in the United Arab Emirates.

To kick off the festivities, the trio along with The Bold and the Beautiful’s executive producer and head writer, Brad Bell held a press conference today in UAB that was posted online by Yahoo! News Maktoob.

During the press conference, photographers snapped pictures of the popular stars, and each of them spoke about the success of B&B with the audience in the United Arab Emirates, and how much they are looking forward to seeing the locations of Abu Dhabi and Dubai over the next few days and more!

In story, Brad Bell previewed: “I’ve been fascinated with Dubai and Abu Dhabi for quite some time because of their spectacular skylines rising up out of the desert on the Persian Gulf and the fantastic convergence of diverse international cultures. In our story, business mogul “Dollar Bill Spencer” (Don Diamont) whisks his fiancée, “Brooke Logan” (Katherine Kelly Lang) off to the Emirates to marry her at this new crossroads of the world.  Possessive ex-husband “Ridge Forrester” (Thorsten Kaye) follows them to impose his will on this romantic, stunt-filled action-packed adventure.”

Parts of eight episodes to be filmed this week in the UAE will air in the U.S. this year from May 23rd through June 6th, while audiences across the Middle East will see them on broadcaster Dubai One a year later in 2015.

Now watch and hear what Katherine, Don, and Thorsten had to say from the Middle East! Then let us know, what do you think about the show traveling to UAB to film upcoming scenes from B&B?

Eileen Davidson On Her DAYS Return: "Kristen Does Not Reenter Salem Quietly …"

GENERAL HOSPITAL: Don't Miss THIS Engagement Party For The Biggest Twist & Truth Of The Year!

Leave it to Ridge to not want or love Brooke, but to want to tell her whom she can marry and whom she can’t. Makes the whole emotional goodbye from today’s episode kind of meaningless. Bradley Bell writes what he wants, when he wants, whether it makes sense or not. If this was all about protecting his son from Bill as a stepdaddy, Ridge wouldn’t chase Brooke half way around the world. He’d sue for custody. I don’t want Brooke and Ridge together anymore, but I don’t understand why he’s sticking his nose in Brooke and Bill’s business.

Wow..For real..This is historic?!!! Filming a soap where human rights are violated..Where being gay is not legal and punishable by law and even death..Very disappointed in the way this news is being presented with joyous overtones..SAD!!

I doubt he even knows anything about what goes on over there and they would not even be there if KKL was not doing a triathlon over there. I would rather he spend that money on good writers. Lol!

Luv Thorsten Kaye ..
He is a handsome rugged sexy/manly!
CBS shows their 2 soaps in 32 countries..
ABC in USA and Canada, only..
(wonder why….?

Being shown in 32 countries makes lots of money for the CBS soaps to keep them going..

I agree I love the new Ridge. He is so handsome and a real man”

I hope Ridge isn’t trying to get with Brooke. I love him and Katie together.

Way to go with the spoilers, now we know Brooke and Bill are going to get engaged again.

Spoilers ruin these shows…i try to avoid them…i miss being suprised…its what made us tune in tomorrow!!!

Exactly what I thought.

I think spoilers should be killed off!!
They kill the– mystery, suspense, surprises, anticipation..
”the thrill is gone” with spoilers..

Spoilers are a very bad thing ..

It’s like reading a great mystery book/story and reading the ending before reading the book..
(then why read the book)

NuRidge is a bigger hypocrite than old Ridge.

I look forward to seeing the episodes, but could have done without the spoilers.

Bell is going to start that darn triangle crap again. Is this all they can write o this show. This is why I didnt want Ridge with Katie. They are great, but Bell is gonna change Ridge back to being a selfish man, wanting only what he wants. Katie will be hurt. what was the purpose in making Thorsten Kay make ridge his own. more relaxed, confident. loving with katie if your gonna have him chase to the middle east. The new ridge would just file for custody if necessary…..ridiculous…always gotta make the show centered around Brooke. Bell is in… Read more »

I think you’re on to something! She wanted to go on vacation there, somhe decided to go with story there!

Stop the damn triangles and near incest!!! There comes a point when men and women of a certain age need to stop acting like children. And there comes a point when these endless quick courtships, quick weddings, annulments/divorces, and all become tiresome. Romance has payoffs when it builds between two people. I cannot take characters or stories seriously when all they do is play on the bedroom carousel. There are in LA!!! They areinternational business people in fashion!!! Give us a stable couple on which to anchor this show and give characters something meaningful to do than sleep through each… Read more »

Ive only watch briefly in the past…now i watch it everyday at night on tvgn…its not such a bad show…enjoy Quinn and Wyatt!!!

B&B is like a bag of potato chips, you take one and it tastes good so you take another, and then another, and then another, and before you know it you ate the whole bag and the ones on the bottom are tainted, you get violently ill and throw up. You swear off potato chips, but maybe in a month or two you are nibbling on them again. Right now, based on your comment you are the ” hey this ain’t so bad,” phase, but keep watching long enough you will reach a point you will want to throw a… Read more »

You make me laugh with that last line and i mean that in a good way…i watched this show in the past when they had Sally Spectra, Stephanies homeless adventure and when Liam nearly married Hope…Quinn, Wyatt and Alley have me watching daily…your warning is too late..help, i cant escape for now…lol

Let’s be honest if it was as bad as some people say they would not be watching it and the ones that claimed to quit until Taylor comes back is funny too. How would you know she was coming back unless your watching or reading about it? How about we just enjoy it!