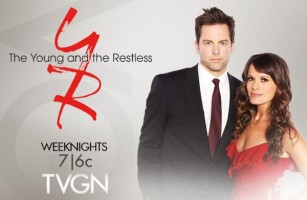 Soaps with same day repeat airings of new episodes on cable television networks are hopefully here to stay! And from new numbers released by TVGN in their first quartet with their latest acquisition, The Young and the Restless, the CBS soap is doing quite well for the cabler, as is its other new hit; Big Brother: After Dark!

TVGN is touting that Y&R and Big Brother: After Dark have delivered triple digit increases in viewers and women 25-54 for the first 10 weeks of the third quarter, according to Nielsen live plus same day ratings.  “The two fan-obsessed shows book-ending our primetime line-up—Big Brother: After Dark and Y&R—have helped TVGN become the fastest growing entertainment network in the country,” said Brad Schwartz, President of Entertainment and Media, TVGN.

VGN’s quarter-to-date (July 1 through September 8, 2013) ratings versus the second quarter 2013 delivery average include the following highlights: The Young and the Restless on TVGN, which airs every weeknight at 7:00 PM ET/PT, drove triple digit increases for the time period among households (+198%) and women 25-54 (+125%). Y&R has averaged 362,000 total viewers, a +199% increase in the time period and delivered TVGN’s biggest weekly audience Monday through Friday at 7:00-8:00 PM ever among households and women 25-54.

So have you been catching Y&R on TVGN?  Let us know!

Will Days of our Lives be airing on TVGN? When it does, I will
not only be a fan of DOOL, but will become a loyal fan of Y&R.

Sharon and Adam are the shows top super hot couple. Bring back Drucilla for Neil! London Bridges! Chelsea better be getting what’s coming to her! Tired of her and the baby story. Time for the ratchet chin to get what’s coming to her! Hope Dylan and Adam take her ass to court! Who cares about the stripper Nikki! What is going on with this show. Avery she got to go also! Annoying girl! Nobody got time for any of that! Nikki is just ratchet. The Victor old fool is a recycled story over and over. Time they moved away from… Read more »

OLTL and AMC reboot repeats should air on this channel and right after Y&R in the evening…theyd do better here than own.

I think DAYS has a good chance airing on TVGN because of SONY.

TVGN is a CBS Channel/network, you will not be seeing ABC soaps on it lol ..

If all the soaps had an evening time slot they all would do much better..

I agree! I remember reading that other countries air our soaps
at night and have a lot of viewers. We’re being cheated!!!

I watched it last night because it had been pre-empted during the day. Wish B&B and Days also aired at night.

I’m a super fan of Soap Operas. I started watching at a very young age, and I loved hearing my aunts discuss what went on for that day. I watched soaps on CBS, NBC and ABC, this was way before cable or satellite was even thought about. I’m glad that the soaps have found a home in the afternoon. Hopefully TBATB will join the others that enjoy the extended life on TVGN and the Soap station. This is one fan who will continue to watch.