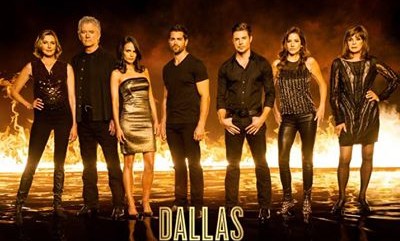 The creative team behind TNT’s Dallas promised a blockbuster midseason finale and it lived up to it, in that there were so many cliffhangers it left heads spinning! And, can we all just stop a moment and take in how deliciously twisted Judith Light’s portrayal of Judith Ryland truly is!

The episode which aired on Monday night, burned down the house, ah Southfork to be exact! But before the fire started, there were flames igniting all over the place!

Pamela (Julie Gonzalo) sees the video of John Ross (Josh Henderson) and Emma (Emma Bell) having sex, which sets off a horrific chain of events.

She is already pissed off at her husband and her so-called best friend, but also very angry at Ann (Brenda Strong) and Sue Ellen (Linda Gray) for keeping that tryst from ever coming out to her!  Later, Sue Ellen tried to make Pamela understand that she knows what it feels like to be betrayed and wanted to protect her, only Pamela tore into Sue Ellen and told her she was nothing but a weak drunk!  So cue Sue Ellen to down every single bottle of booze she could get her hands on at Southfork until she passed out drunk.

Next, Pamela uses her phone to track down John Ross who is at the Omni Hotel with Emma, who is also setting up the guy  thanks to Judith’s words to her which were, “I know from personal experience what pleasure strong men can give women like us and how sometimes our hearts get involved even when we don’t want them to. Be smart, my darling girl. They heel better when they have a leash around their neck.”  Judith knows John Ross wants in at Ryland Transport and is playing her granddaughter.

When Pamela arrives in the hotel room and catches John Ross and Emma in bed, you think she is going to pull out a gun on them, but instead is wearing the same green teddy as Emma … and she begins making out with Emma. Next, and at first appalled John Ross, joins in!  As the trio are having their romp, Pamela goes into convulsions and John Ross and Emma find a bottle of pills in her coat …  and they call 911!

Elsewhere, Drew (Kuno Becker) is back and hell bent on destroying the Ewings!  Elena (Jordana Brewster) is panicked!  Joaquin (AKA Nicolas) wants Drew to stay out of Elena and his way and their plan!.  Elena realizes she should have never blamed Christopher (Jesse Metcalfe) for anything, but Nicolas (Juan Pablo di Pace) screws with her birth control and then has sex with her to get her pregnant!

Ann, after a big blow out fight with Bobby (Patrick Duffy), ends up at Harris Ryland’s (Mitch Pileggi) and the two kiss after she has drink.  Realizing the closeness of the moment, Ann leaves at this point, but Judith is furious as she witnesses the exchange from the upper window!

Christopher and Bobby have driven off to try to find Bo, who kidnapped Michael from Heather (AnnaLynne McCord), after Heather and Christopher decided to be together!  But from the looks of it, Bo set fire to Southfork! Or, did he?   And inside Southfork is a passed out Sue Ellen!  Later, when Christopher and Bobby arrive home to see their home in flames, they go inside, but are knocked out by falling ceiling beams!

So what did you think of the midseason finale of Dallas?  What was the biggest shocker to you?  What was your favorite moment in the episode?  Weigh-in!

I loved every minute of it. It lived up to the hype. I can’t wait for August . Please please renew!!!

I liked it a lot. I didn’t believe that Pamela was going to do something we wouldn’t be able to see coming and had never been done before. Boy, was I wrong. In a good way!

I thought it was a great episode with a lot of cliffhangers and questions to be answered.For example who really set the fire at Southfork?Plus if Pamela recovers will she remember everything?Plus will Sue Ellen,Bobby and Christopher survive the fire unscathed?I can’t wait till the Summer when the new episodes air?

In the original Dallas a season ended with Southfork on fire and SueEllen drunk upstairs so last night really was nothing new. Big disappointment. This reboot is just no fun.

I lost interest in it…

It was probably the BEST hour of television I’ve watched in a really long time. However, when I saw that return date, I started breaking out in hives. What am I gonna do until August 18th?! Yeah, I mean, these other TV shows are ok, but NOBODY can do it like Dallas these days.

I’m really enjoying DALLAS, including the mid-season finale, and can’t wait till August. Hope the show is renewed past the last half of this season in August.

Love me some Judith Light…when did she become such a ranging evil bitch ..perfect and sexy hot too

In my opinion, Dallas went from genius to silly.

I loved it, and I’m old school Dallas. Who’d thought our sweet Karen Wolek was so darn creepy! Whoa Pamela I didn’t see that one coming. I didn’t know hubby was watching in the bedroom (I thought he left me to go watch baseball). I heard a big ole HOLY S#$%! coming from the bedroom. It’s too long to wait til August. Please make this a spring and summer show so it doesn’t compete with some other cable shows.

I’m hoping the 3some is a dream. It didn’t make any sense. Linda Gray is doing an amazing job. She deserves an Emmy … best drunk on TV ever!

If you really want to do something that would cause a stir on Dallas. Get Victoria Principal to reprise her role as Pamela Ewing. They never killed her off they just said that she went off somewhere in the Midwest.