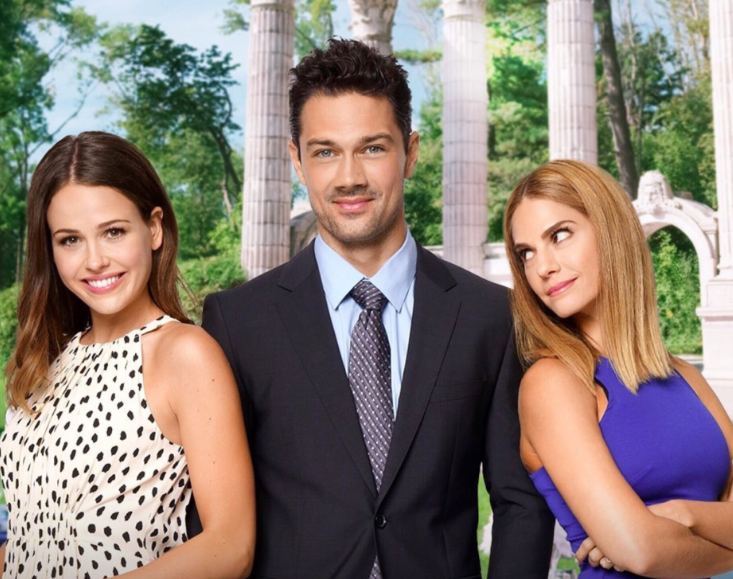 When Ted gets engaged to the high school mean girl and asks Jess, his childhood best friend, to plan their wedding, things get complicated. Her true feelings for Ted keep getting in the way … and that’s the set-up for tonight’s premiere of From Friend to Fiancé  which stars Jocelyn Hudon along with daytime drama favorites: Kelly Kruger (Mackenzie, Y&R) and Ryan Paevey (Ex-Nathan, General Hospital).

From Friend to Fiancé bows tonight on the Hallmark Channel beginning at 9PM ET and 8PM CT.  In the story, Paevey plays the man at the epicenter of all the attention, Ted, while Kruger takes on the role of Kimberly Kentwood.

This movie is part of Hallmark’s ‘Countdown to Summer’ promotion of stories that always centers around love and romance and how people come together, or break apart, and them come back together again.

The cable network sent this tweet out in anticipation of tonight’s premiere: “The wait is almost over! What will Jess @jocelynhudonx do when she finds out her best friend Ted @RyanPaevey is marrying her sworn high school rival Kimberly @KrugerKelly?”

Meanwhile, Kelly Kruger announced that she will be live-tweeting with fans at 9PM during the debut of the movie.

So, looking forward to seeing Ryan and Kelly together on-screen? Comment below.

THIS WEEK On Y&R: Christel Khalil and Eileen Davidson Return As Neil’s Will Is Read

Ryan and ALL his co-stars have chemistry. This should be another hit for Hallmark. Just hope there can be more Darcy movies!!

I am recording ^^^ his movie just to see how he’s checking OUT. AT THIS POINT – in time – he’s so missed. because what is happening to Maxie.. alone… ??? and WITH Peter August… is a travesty. WAKE UP writers

pair her w/Peter – they are DEAD already

“Ryan” is still holding his audience… PLUS by this time. who isn’t just as physically able ?!?!?! he’s doing it THEE PACING of ??? prime time ; movies ; hallmark are serving “him” NO MORE ARE we faced with the timing of the last shot before camera fades… which can be eon… HOLD HOLD HOLD – argh ! cut my head off CUT so… that’s a lot HEY ! even Max Gail shared with Michael Fairman in interview how it’s a “challenge” to keep that shot in continual motion I was so relaxed… by his physical attribute .. yeah, charge… Read more »

Patrick
Just saw your post, and sorry we don’t agree on this one.I don’t miss Ryan Paevey one bit, because of the hunky Chase, who makes up for him 100%. His twinkley, sparkling eyes alone,”dag! he’s a stunner” Was that statement for our Peter? Sorry, just yanking your leg a little here.

Violet : “thank you” for the – hearty – laugh; i’m still chuckling

I had just sat down, with my first coffee of the day… first couple of sips… AND read your post

whatever catches your fancy, no?

Patrick Just cant help myself sometimes. I’m always afraid my humour will offend someone, but Celia says she has a crazy funny bone too, so I kind of feel I have her for backup. P.S glad you didn’t choke on your coffee!

All these Hallmark are the same stories with different titles.

yes. I like Ryan but the movie was cheesy with childish dialogue. Boring!

For some reason, i don’t miss him on Gh. I think he has been perfectly replaced by Chase (sorry, I’m blanking on the actor’s name).

Tony
Sorry to say, I’ve not missed Ryan Paevey one bit. Josh Swickard/Chase has taken over quite well. I don’t miss Dante either. Maybe it’s true, out of sight, out of mind.

Ryan is always charming, and Kelly was also–BUT they needed MUCH stronger writing. There were a lot of empty “fillers” in the movie. To bad–much potential in both actors, if they were only given stronger material. Why can’t they get stronger writers on the movies on Hallmark? A lot of the movies lack “teeth” and substance–but a lot of the other actors featured also have potential.

Nancy,
I think they just need to replace their old cookie cutter. Maybe the old one is wearing out. Ha!

Hey Violet! I think you are right! 🙂

Now, if I can only get her name right: everyone actress deserves as much.
It’s “Jocelyn Hudon”–my apologies to her.