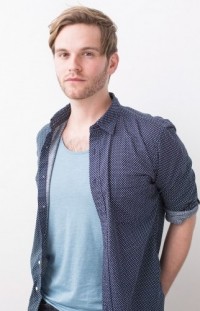 Fan favorite Van Hansis won the hearts of soap opera viewers for his portrayal of Luke Snyder on As the World Turns.  Since the CBS soap opera met its demise back in 2010, viewers have always wondered what would have happened next for Luke post the death of his then latest love Reid Oliver (Eric Sheffer Stevens) and if he would have gotten back together with Noah (Jake Silberman).  As one part of the popular same-sex couple, Nuke, Van and on-screen scene partner Jake Silberman became international sensations.

Among numerous projects post-ATWT, Hansis has been appearing in the hit web series EastSiders about the plight of a same-sex couple where infidelity between partners is the cause for much of the dramatic turns in the story.  In a fascinating new interview with The Fight, Kit Williamson, the creator, star and writer of EastSiders interviews Van!

During their chat, Hansis revealed why he chose not to come out publicly during his years playing Luke on As the World Turns:  “I guess it was a combination of a lot of things—It was my first job, it was a different time back then in regards to LGBT stories being told—I mean, the Luke story was groundbreaking at the time.  I was completely green, fresh out of college, and honestly, I was scared.”

Later in the interview, Van spoke of how EastSiders helps break down pre-conceived notions of LGBT characters in the media:  “I think this is part of the reason I connect with a show like “Eastsiders” so much. It, along with so many other really remarkable shows—whether LGBT focused, or just including some really great LGBT characters- are changing the narrative on preconceived notions. While for decades LGBT characters in cinema could be the villain, victim, or asexual comedic relief—shows like what you have created have characters so well rounded that you can be all three, and so much more. As we all are, often in the same day.”

EastSiders is currently gearing up for its second season with a kickstarter campaign to raise funds with 13 days to go.  To check it out and see how you can participate click here!

So, what do you think about Van’s comments on why he did not feel ready or comfortable to come out given the nature of where things were at with the LGBT acceptance in the media several years ago and that it was his first job? It is very understandable to see where he was at with it at that time in his career.  Will you be watching EastSiders season two when it arrives? Let us know!

Terrell Tilford Joins The Cast Of The Young and the Restless As BARTON!

I love this man so much, I. Live in vancouver bc, canada. I’m a gay man 25 years old, I took a trip to New York in 2011, I ran into Van on the street. I got is autograph and he spent 30minutes talking to me, he is so friendly down to earth and cute too. Lol. I’m also a part time actor now and also do modeling here in Vancouver bc, Canada.

Van is so much more important than he realizes…..he’s yet to own his rightful place…..

“…I was completely green, fresh out of college, and honestly, I was scared.”

the operative word…. “I was scared too” how to get that sense of security within yourself to truly emote, feel, and embody LOVE

I think he’s doing on his own terms and love him regardless!!

He is so cute and smart and talented why a soap has not scooped him up is a mystery. I love guy Wilson on days but van would’ve been a great will too

He’s so amazing. Wish every closeted gay actor in Hollywood (and New York) would use him as a role model.

This is so much less about coming out than it is about an industry that tells people that they will find it difficult to work and be accepted if they tell their own truth. Van Hansis is one of a handful — truly a handful — of super-talented young actors to emerge from soaps in the last decade. We should be celebrating his contributions and encouraging more inclusive independent series, like EastSiders. So, if you believe in this, you have to support this Kickstarter!

It’s a huge surprise that a talented actor like VH has not been picked up by any of the current soap operas. It’s wonderful that he is in East-siders and that series is doing well. I like VH as an actor and from his interviews he comes across as a wonderful human being. It is a thorough shame that gay characters (in general) are not treated the same as the straight characters in soaps, shows, and movies. DOOL is a rare exception and aired the same-sex wedding of Will and Sonny. It was really disheartening and disastrous that ATWT gave… Read more »

I think it’s nice that Van Hansis finally came out and he’s doing it when he wants to do it.Plus he may have put some distance between him playing a gay character and then he himself coming out.

We are hopefully seeing a new world of people living their truths openly and freely as they were born to be. Van is a very talented person who should be on everyone’s screen on a regular basis and like many others here, I am totally surprise that the Networks having been knocking his door down to get him on one of their shows or movies.

Glad to know I have a chance, I ve seen him at the gym…