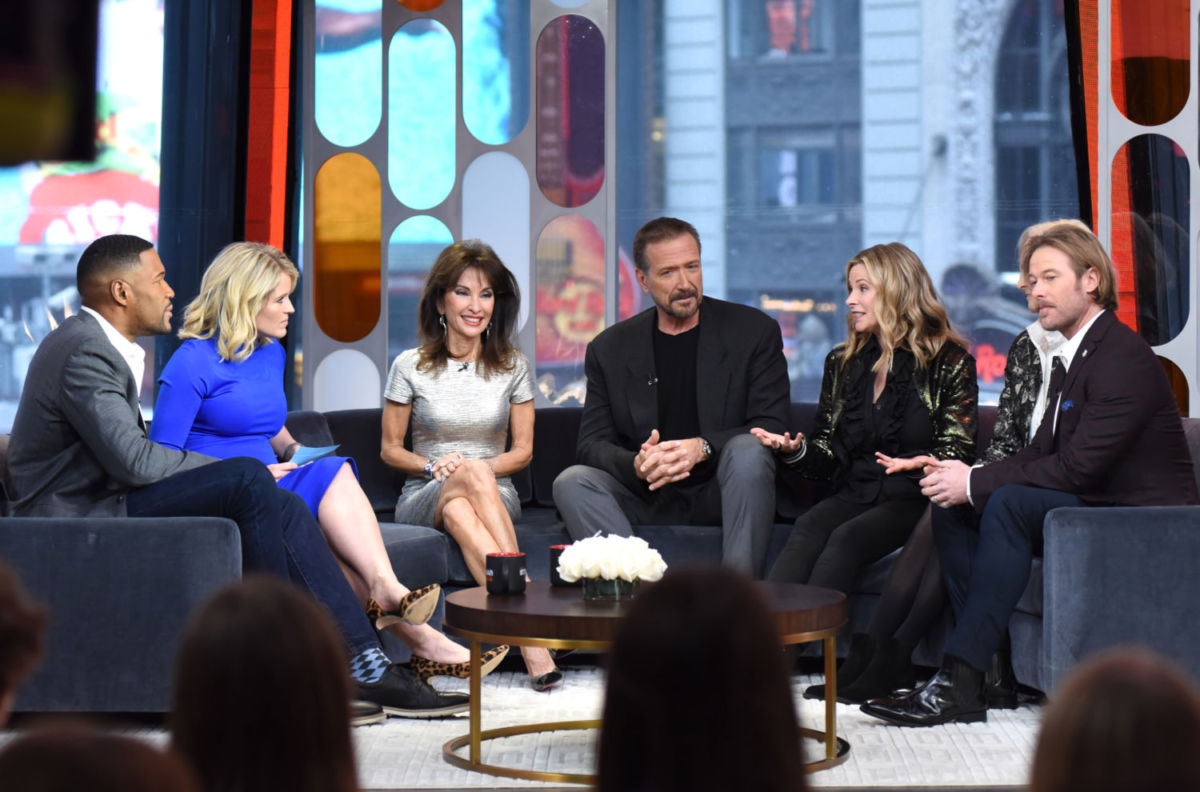 While it was wonderful to see the stars from Pine Valley again, it was also a painful reminder that this network, ABC, canceled the show, and had put in its place – The Chew, and now Strahan & Sara – since canning the series.   In fact, as you will see on the clips below, many of the crew who work on this talk show were once the crew for All My Children.

During the segment, Susan Lucci was tested to see if she remembered all of Erica Kane’s wedded names.  Later, Walt Willey and Susan re-created the final scene of the ABC version of All My Children between Erica and Jack, where Jack walks out on her.  However, this time, they have Jack changing his mind and coming back to Erica and sealing their relationship with a kiss – a moment of closure that never happened (since the show moved to online via Prospect Park).

In addition, Cady McClain and Jacob Young re-created the infamous Dixie “dying from eating poison pancakes” scene, as JR watches his mother die, only this time she lives.

It’s always great to see these veteran performers, but Strahan & Sara is trying to capture the soap viewers to put eyeballs on their show by bringing in talent from the show that sadly and wrongly went off the air.

Watch the clips below from the All My Children reunion below.  Then, let us know what you thought of it via the comment section below.

I want all my children to come back to abc! They should have never cancelled it !

I am probably being over-sensitive, but I thought it was in poor taste that Strahan mentioned that his show now has “AMC’s” time slot. Does he not know this is still a sore spot with “AMC” and “OLTL” fans? But, I appreciate the show giving us a mini reunion. Since Cady was there, I would have loved to have seen her with Michael E. Knight.

Would have loved to see MEK too

Miss All My Children. Replace Strahan and get it back! So sad.

Pretty bad show!! Great seeing them all but it was like they were making fun of the show with those recreations. How many times did S\S say something about fans!?? ABC get the hint even from your ‘talent’ the fans want AMC back in the air!!

I too felt as if they were ‘mocking’ the show and I didn’t care for that aspect of it – they need to bring ALL MY CHILDREN back, plain and simple.

Thank you for posting the clips. It was great to see those cast members and know they are busy.

ONE LIFE TO LIVE is all I can say, other than BRING MY SHOW BACK !

Miss my OLTL so much. Not the same watching GH. When I see Roger Howarth I think there’s Todd and when I see Michael Easton I naturally see McBain. Makes it hard to watch.

THAT’S the way Jack/Erica should have ended. Thank you Walt & Susan for caring for your fanbase since AMC writers did NOT. Loved seeing them together again..

some of the amc characters should pay GH a visit, especially Susan Lucci, in fact, the time now would be perfect with the reason health scare Susan had, Erica could be visiting Port Charles when she starts feeling not so good and is taken to GH were she’s having similar symptoms that Susan had, so she’s hospitalized and of course she comes out ok, but while recuperating she runs into Anna Devane, and meets other characters and some fun ensues. in fact even before Erica has her surgery she insist David Hayward operate on her, and guest who he would… Read more »

I feel sad for AMC fans on one hand because it has to still sting that their show isn’t on where it should be. On the other hand, I think they’re lucky because they keep getting little reunion spots on various shows over the years. I wish it would happen for some of my favorite shows. I long for that. I long for a great big show that celebrates all the shows that have departed and those four that are still with us. One can dream.

Damn……this was great. Even so, it brought tears to my eyes. I really still miss this show.

The Talk also does this sometimes with the Proctor and Gamble shows. I’d love to know what the ratings are when they have these soap reunion shows. If they can do a Brady Bunch reunion show and a Downton Abbey movie why can’t the soaps show Erica Kane and the Martins over a couple of days with the grand kids. We’d see Erica and Jack in their twilight years. Learn if Kendall and Zak stayed together. Watch JR mourn Adam. It would be so moving. I guess the networks don’t want to feed the appetite for soaps again.